It’s important to exercise your brain, an often-overlooked – yet very important – muscle in the body and what better way than to use optical illusions? Moillusions is a site that is dedicated to showing each and every possible type of optical illusion you can think of.

However we’ve found a few that use everyday objects placed in forms and positions you’d never imagine – and in some cases using digital photography tools to finish the illusion – with the end result being an optical illusion that seems utterly impossible. 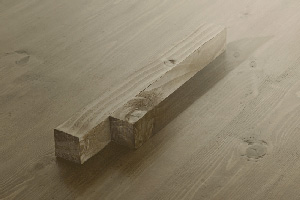 The first illusion, called “The Impossible Wooden Beam Illusion” is quite a doozy. At first glance you are able to see two separate pieces of wood however the second piece looks as though it has disappeared into thin air! The knob on the second piece is quite obvious yet it is virtually impossible to see where it ends, how it blends or any other type of conclusion.

This photograph was created by a professional photographer so he has finished the photo with some help of digital tools. Although it could be argued that all he’s done is smooth some lines! The second beam’s illusion of disappearance can be achieved by cutting the wood at a very specific angle and plane and using stain and lighting to achieve the perception that it’s magically faded into thin air. 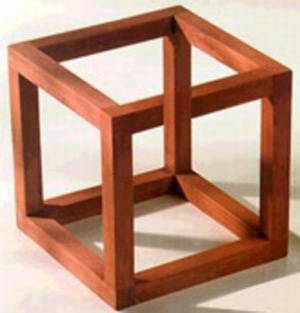 The next illusion is also created using simple wood and stain; however this one doesn’t need any digital tooling to fool the eye. All that is required is a steady hand with the cut of the wood and placement of the pieces to create an impossible cube sure to become an amazing optical illusion. The one requirement, however, is that the photographer taking the picture has a very specific photo angle in order to keep the secret of the illusion which is the top bar.

Can you figure out how the top bar is cut to achieve the look? SPOILER ALERT: The top bar is actually cut into a “V”. It wraps behind the back vertical post and reconnects to the front vertical post creating the illusion of a straight line. If you look at the cube from any other side except the necessary head-on angle you’ll see the curve of the beam.

I love that for the next optical illusion the artist has used a person instead of the expected hamster to run in the wheel. Moebius Wheel Guy goes on and on however- is he inside, outside, or on the edge of the wheel? It’s up to you to determine. Here’s where it gets tricky.

Related  Starting a New Design Business? Here are the Essentials 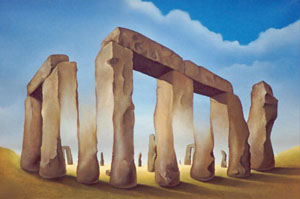 One of the greatest Wonders of the World is Stonehenge but did you know that someone has used it to create an optical illusion? This illusion is actually a painting created by Norman Parker and at first glance there’s nothing fishy. The fact that most people already have a preconceived notion of Stonehenge helps too.

So a person would be apt to glance at the photo, maybe think, “Eh, it’s Stonehenge. Nice,” however- what happens when you take a closer look at the columns? Using what you would normally think was the shining of the sun the artist has created disappearing columns. Which ones are real and which ones are an illusion? 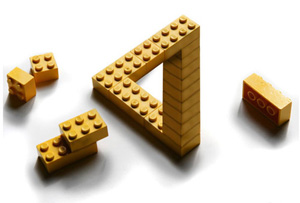 This last optical illusion is one you can actually create on your own using dice or Legos. Once you’re aware of how to construct the triangles and how to view them effectively you can fool just about anyone with your prowess.

SPOILER ALERT: To create this illusion you will create the half triangle on a flat surface using three eight-dot Legos and one four-dot Lego.

Then build upon the first eight-dot Lego with eight more four-dot Legos. At the top of the pile, place one eight-dot Lego facing to the left. At this point, grab your camera and line it up so that the top Lego and the back 4-dot Lego line up next to each other. It will appear that you’ve created an impossible triangle!

And there you have it! Five awesome optical illusions made with impossible objects. It’s your turn now, let’s see how many you can create!