The task of business card printing or flyer printing can seem like a long line of daunting decisions about content, layout, and typeface. The vast array of fonts in particular is a source of confusion and dismay to many people. Where do fonts come from? Which one should you choose? Your choice will have a subtle but certain impact on your image so here are a few notes to help you decide. 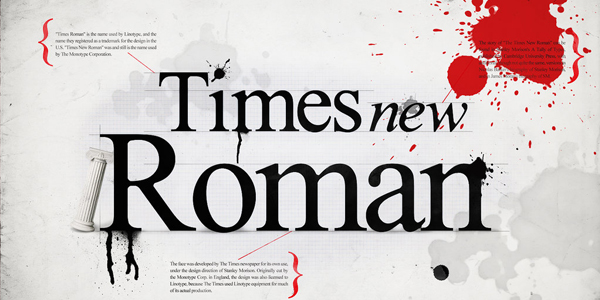 In 1931, British Newspaper The Times commissioned a new typeface to be designed to jazz up their stuffy broadsheet. It is a serif font, meaning it has sticky out bits at the tops and bottoms of the letters.

Designed to have an easily legible and modern look, it has since become the most widely used font in the world, largely because it was adopted by Microsoft and the publishing industry. This font looks reliable, trustworthy, and traditional.

If you want to look like you’re using an old typewriter then this is the one for you. The monospace style and slab serifs give it a mechanical and old world feel. This isn’t surprising as that’s what it was designed for in 1955 by Howard ‘Bud’ Kettler for use in IBM typewriters. It then became standard in the typewriter industry. It’s still the standard for film scripts today.

The mechanical style is easy to read at first glance but harder on the eyes for longer or denser documents. Designed to radiate ‘dignity, prestige, and stability’ it now speaks of the old-fashioned and engineered.

Designed by Vincent Connare for Microsoft in 1994 to reflect the casual hand drawn style of comic books, this font has been hijacked by people who want their garage sale flyer or blog to look fun. In fact, it looks amateurish. Do yourself a favour and never use it in a professional document or piece of advertising.

Created by printer and perfectionist John Baskerville in 1757 and revived by Harvard University Press in 1917, it is clear, consistent and easily read. It makes an excellent font for large body text and looks just different enough from Times New Roman to stay fresh. A font highly recommended for that professional look when you need it.

Based on the work of our friend John Baskerville, Bodini features a high contrast between thick and thin strokes and was prominently used in the logo for the band Nirvana. It was designed by Giambattista Bodoni in 1798 and any computer today will contain several variants.

Due to the dense style of this font it is better used in larger sizes. The narrower strokes can also be lost in fine mechanical printing. In larger sizes, the broad strokes can make a striking header or title to really capture attention. You can always switch to a different font for the body text.

The graphic designer’s old standby, this typeface can be seen just about everywhere. When Miedinger and Hoffman designed it in 1957, they probably had no idea this sans serif font would become ubiquitous and would be celebrated by a documentary and an exhibition at the Museum of Modern Art in New York on its fiftieth anniversary.

Its strength seems to stem from the fact that it so legible in any circumstance and also that it feels very neutral, lending itself to any mood; classical, modern, professional, fun. If you’re ever in doubt, this old favourite will probably fit the bill.

Helvetica is so well loved that it featured in Google’s April Fools Day search joke in 2011. On that day, anyone who searched for Helvetica on the Google search page had their results displayed in Comic Sans.