Alexander the Great is one of the most memorable figures in history because of what he was able to achieve at a young age. He conquered most of the known world during his time before most youngsters today are out of college.

In an eleven-year journey, he rode over 10,000 miles, fought and won 70 battles, and took over territories from Egypt to India. He was called “the great” due to his incomparable diplomatic skills and military genius in terms of handling the different populaces he conquered. 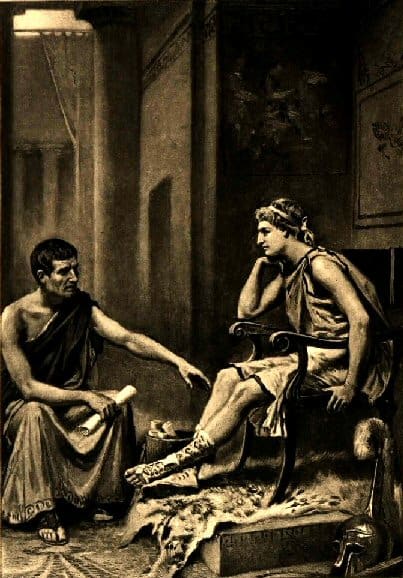 Alexander III of Macedon, also known as Alexander the Great, lived from July 21, 356BC to June 10 or 11, 323BC. He was the son of Olympias and King Philip II of Macedon. He was taught to ride and fight by none other than Leonidas of Epirus, a relative of his mother.

Lysimachus of Acarnania was enlisted by the king to teach Alexander to write, read and play the lyre. For the next three years, he was tutored by Aristotle. They remained in correspondence all throughout Alexander’s campaigns in the latter part of his life.

Alexander, the King of Macedonia

During the festival for the wedding of Alexander’s sister, King Phillip II was slain by a Macedonian noble named Pausanias. Then 19, Alexander was determined to seize the throne in any way he could. He eventually gained the Macedonian army’s support, as well as the support of high-ranking officials he had fought with before.

Alexander was proclaimed the feudal king by the army, who also helped him kill all other potential heirs to the crown. Olympia stayed loyal to her son, so she also took action and murdered the daughter of King Philip II and Cleopatra. She even drove Cleopatra herself to suicide.

Despite being the feudal king of Macedonia, Alexander still did not have control over the Corinthian League. Southern states of Greece even became divided as they celebrated Philip II’s passing. Alexander sent his army south and forced the entire region of Thessaly to acknowledge his leadership.

In 334, Alexander began his Asiatic expedition and reached Troy that spring. He had a battle with King Darius III’s army somewhere near the Granicus River. Just like all his previous campaigns, Alexander emerged victorious during his war with Darius’s forces.

Darius and Alexander faced off again in the summer of 333. While Alexander’s army was outnumbered by the enemy, he used military tactics to have the upper hand. The great conqueror came up with formations that brought the Persians down to their knees, causing Darius to flee.

His next agenda was to take over Egypt. Alexander did not break a sweat with this conquest because Egypt instantly fell without any resistance. When the Persian army finally collapsed, Alexander was named “King of Asia, King of Babylon, and King of the Four Quarters of the World.”

While Alexander was in central Asia, he fell in love with a local ruler’s daughter named Roxana. She eventually became his last wife.

His men are already tired but he still pressed on into a land which Greeks referred to as “India” (although it was actually present-day Pakistan). He used the city of Taxila as a base of operations after forming an alliance with another local ruler named Taxiles.

In exchange for the supplies and city given to him by Taxiles, Alexander had to fight a local ruler named Porus. Alexander agreed to fight his army that reportedly included 200 massive elephants. Their battle took place at the Hydaspes River in 326 B.C.

Porus was at the opposite bank as he assumed a defensive position. Alexander took his time and scouted the area before building a fleet of ships. He used them to give Porus a false sense of security, having him respond to Alexander’s forces that were making it look like they were going to cross the river.

Alexander attacked again in the middle of the night and he learned that Porus’ cavalry was not as experienced as his. Despite being captured in the end, Porus still had the guts to tell Alexander to treat him like a king. Impressed by his bold words, Alexander decided to make him an ally.

Alexander was planning on taking over Rome and Carthage but he died due to malaria. He was 32 when he passed away in Babylon (now Iraq) in 323 BC. A few months after his death, his wife Roxana gave birth to their son. Following Alexander’s death, his whole empire fell and the nations within it fought against each other for power.

Perhaps the most significant legacy left by Alexander was the proliferation of the Greek culture. His reign paved the way to a new era in history known as the Hellenistic Age. To this day, Greek culture continues to have a powerful influence on all the areas Alexander conquered before.

Here are the most memorable quotes by Alexander the Great to inspire you to live your dreams and conquer your fears.

“There is nothing impossible to him who will try.” – Alexander the Great

“A tomb now suffices him for whom the world was not enough.” – Alexander the Great

“But truly, if I were not Alexander, I would be Diogenes.” – Alexander the Great

“Upon the conduct of each depends the fate of all.” – Alexander the Great

“A king does not kill messengers.” – Alexander the Great

“Now you fear punishment and beg for your lives, so I will let you free, if not for any other reason so that you can see the difference between a Greek king and a barbarian tyrant, so do not expect to suffer any harm from me.” – Alexander the Great

“There are no more worlds to conquer!” – Alexander the Great

“Our enemies are Medes and Persians, men who for centuries have lived soft and luxurious lives; we of Macedon for generations past have been trained in the hard school of danger and war. Above all, we are free men, and they are slaves.” – Alexander the Great

“Through every generation of the human race there has been a constant war, a war with fear.” – Alexander the Great

“My treasure lies in my friends.” – Alexander the Great

“There is nothing impossible to him who will try.” – Alexander the Great

“As for a limit to one’s labors, I, for one, do not recognize any for a high-minded man, except that the labors themselves should lead to noble accomplishments.” – Alexander the Great

“Glory crowns the deeds of those who expose themselves to toils and dangers.” – Alexander the Great

“For my part, I think that to a man of spirit there is no other aim and end of his labours except the labours themselves.” – Alexander the Great

“Whatever possession we gain by our sword cannot be sure or lasting, but the love gained by kindness and moderation is certain and durable.” – Alexander the Great

“I had rather excel others in the knowledge of what is excellent, than in the extent of my power and dominion.” – Alexander the Great

“I would rather live a short life of glory than a long one of obscurity.” – Alexander the Great

“Let us conduct ourselves so that all men wish to be our friends and all fear to be our enemies.” – Alexander the Great

“Every light is not the sun.” – Alexander the Great

“There is something noble in hearing myself ill spoken of when I am doing well.” – Alexander the Great

“Toil and risk are the price of glory, but it is a lovely thing to live with courage and die leaving an everlasting fame.” – Alexander the Great

“The end and object of conquest is to avoid doing the same thing as the conquered.” – Alexander the Great

“How great are the dangers I face to win a good name in Athens.” – Alexander the Great

“With the right attitude, self-imposed limitations vanish.” – Alexander the Great

“I do not pilfer victory.” – Alexander the Great

“Whatever possession we gain by our sword cannot be sure or lasting, but the love gained by kindness and moderation is certain and durable.” – Alexander the Great