Who Is Ashley Tisdale?

Ashley Michelle Tisdale is an American actress, producer, singer, songwriter, and model who became famous during her childhood after featuring in more than 100 commercials. Around the same period, Tisdale had minor roles in theatre and television. However, she gained widespread recognition following her appearance in the television series The Suite Life of Zack & Cody (2005–2008) as well as in the High School Musical film series (2006–2008).

Tisdale’s most recent notable role was starring in the sitcom Carol’s Second Act from 2019 to 2020. She also serves as a panelist on the reality television series, The Masked Dancer.

Ashley Tisdale has also enjoyed a relatively successful music career. Tisdale’s debut album, Headstrong (2007), remains her most commercially successful album to date. The album has since been certified gold by the Recording Industry Association of America (RIAA).

Tisdale started auditioning for commercials at the age of three. She went on to appear in over 100 national network television advertisements as a child.

Ashley Tisdale kicked off her theatrical career by appearing in a variety of shows at the Jewish Community Center in Monmouth County, including The Sound of Music and in Gypsy: A Musical Fable. When she was eight years, Tisdale began appearing in the musical Les Misérables. And at the age of 12, she performed a song for President Bill Clinton during an event at the White House.

Tisdale made her television debut in 1997 as a guest star on episodes of Smart Guy and 7th Heaven. Around the same time, she landed a few modeling gigs for Ford Models.

In 1998, Tisdale lent her voice to the films An All Dogs Christmas Carol and A Bug’s Life. In 2000, she made a guest appearance in an episode of the series Boston Public. Tisdale accepted several other film and television roles over the next couple of years, including Donnie Darko (2001), The Mayor of Oyster Bay (2002, film), and Grounded for Life (2001).

In 2005, Tisdale began appearing in the Disney Channel series The Suite Life of Zack & Cody. She starred in the show until 2008. Tisdale’s ultimate breakout role came in 2006 after she was cast as Sharpay Evans in the Disney Channel film High School Musical. Thanks to her performance in the film, Tisdale earned a recording contract with Warner Bros. Records.

In February 2007, Ashley Tisdale released her debut album, Headstrong (2007). The album debuted at #5 on the Billboard 200 and sold over 64,000 copies in the United States alone during its first week of release. It was eventually certified gold by RIAA. Tisdale would later follow with two more studio albums, namely Guilty Pleasure (2009) and Symptoms (2019).

In 2007, Tisdale reprised her role as Sharpay Evans in the second installment of the High School Musical series. The same year, she began appearing in the animated Disney series, Phineas and Ferb, starring in the series until its end in 2015.

In 2008, Ashley Tisdale founded her production company called Blondie Girl Productions. Through the company, Tisdale made her producer debut in the movie ‘Picture This,’ released the same year. 2008 also saw Tisdale reprise her role in the third sequel of High School Musical.

Tisdale continued to appear in a variety of films and television series, including:

Tisdale has received numerous awards over the years, including:

Ashley Tisdale has spent nearly her entire life acting, singing, and modeling. For her combined efforts in the entertainment industry, Tisdale has accumulated a net worth of $14 million as of April 1, 2021.

The vast majority of Tisdale’s earnings comes from acting, voice acting, and production. She was paid $35,000 per episode of The Suite Life of Zack and Cody and $30,000 per episode of Hellcats. Tisdale also reportedly earned $1.5 million for the third installment of the High School Musical film.

Production credits accounts for a huge share of Ashley Tisdale’s recent earnings from film and television. Tisdale has produced a number of films and television shows through her production company Blondie Girl Productions, including the films Picture This (2008) and Cloud 9 (2013), as well as the television series Miss Advised (2012).

Besides acting and production, a significant portion of Ashley Tisdale’s wealth also comes from music. Ashley’s debut album, Headstrong (2007), remains her biggest musical project to date. The album sold over 64,000 copies in the US alone during the first week of its release. Tisdale’s second album, Guilty Pleasure (2009), registered moderate commercial success, selling around 25,000 copies during its first week of release.

Ashley Tisdale has also involved herself in a number of business ventures outside the entertainment industry. Tisdale owns a fashion line with Signorelli and a cosmetics line with BHcosmetics known as Illuminate. She’s also active on social media, with 19 million Facebook likes and 13 million Twitter followers as of May 2019. 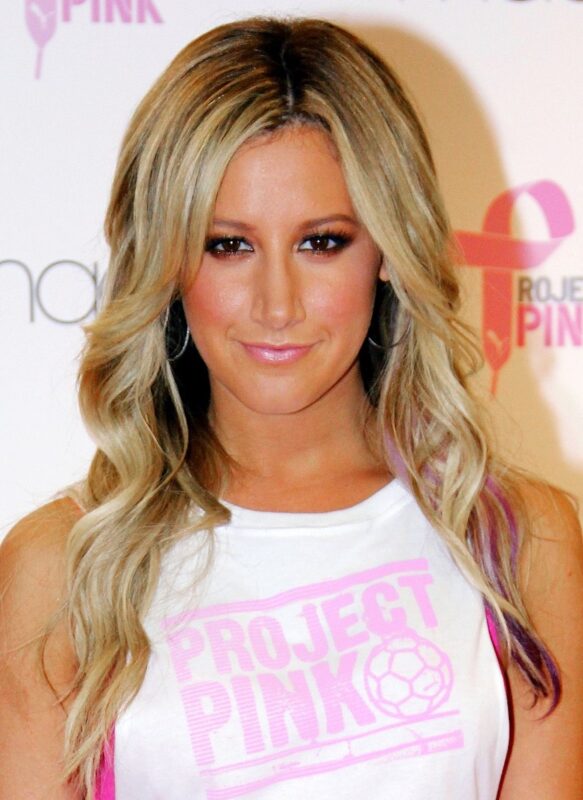 Ashley Tisdale started auditioning for television gigs at the age of three. And when she realized she could act and model, she never looked back.

Tisdale understands how difficult it is to become rich working one job. That’s why she has pursued a variety of income channels over the years, both on and off the entertainment industry.

Ashley Tisdale is a generous philanthropist and has supported numerous charitable organizations during the course of her career. In 2008, Tisdale collaborated with the Make a Wish Foundation to visit sick children. Other charity organizations that Tisdale has supported include Habitat for Humanity and St. Jude Children’s Research Hospital.

“Don’t let anyone or any rejection keep you from what you want.”

“If I feel like someone’s trying to bring me down, I just walk away from it.”

“Music and fashion inspire each other.”

“With every character, I just bring something that I can make my own.”

Ashley Tisdale is an American actress, singer, and model who has been an active figure in the entertainment industry since the age of three. Tisdale has appeared in tons of award-winning films and television shows, as well as released several commercially successful music albums and singles. She has a net worth of $14 million in 2021.