Who Is Bad Bunny?

Benito Antonio Martínez Ocasio, better known by his stage name Bad Bunny, is a Puerto Rican rapper, singer, and songwriter. As a rapper, Bad Bunny stands out for his deep, slurred vocal delivery style. He is also known for his eccentric fashion style, which appears to be pushing masculinity to new heights.

Bad Bunny’s music predominantly features elements of Latin trap and reggaeton. However, the rapper is also renowned for his creative ability to weave in other genres into his music, such as rock, soul, and bachata. 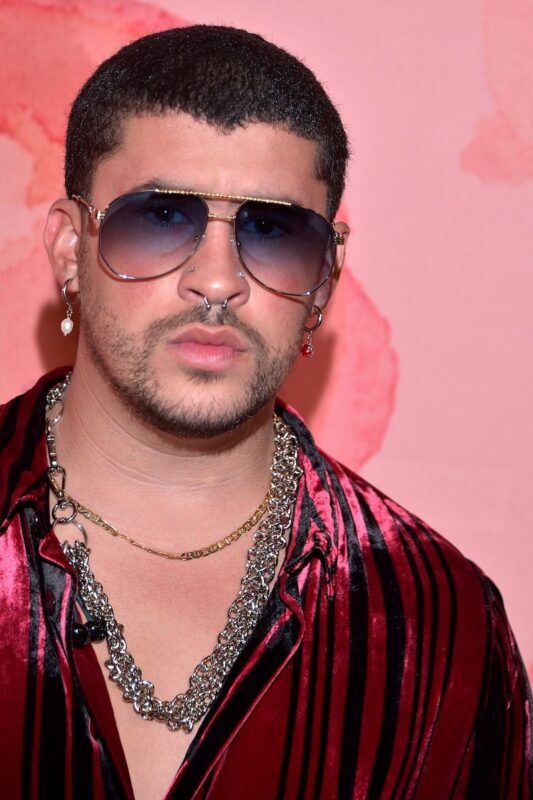 Benito Antonio Martínez Ocasio was born on March 10, 1994, in Almirante Sur, Vega Baja, Puerto Rico, to Tito Martínez Ocasio and Lysaurie Ocasio Declet. His father was a truck driver, whereas his mother is a retired schoolteacher.

Benito Antonio developed musical interests when he was a young kid. He sang in his local church choir until he was 13 years old.

After leaving the choir, Benito continued to listen to music on the radio and became a huge fan of artists like Daddy Yankee and Héctor Lavoe. He performed his first solo in a middle school talent show, a rendition of the song Mala Gente by Juane. It’s also around this time that he earned his stage name Bad Bunny. Apparently, the name came about after a photo of him emerged, where he put on an angry expression as he was being forced to wear a bunny costume to school.

When he proceeded to high school, Bad Bunny continued to create freestyle raps which he used to keep his fellow classmates entertained. And despite being considered a shy student, the young Bunny was reputed for his creative use of humor.

After graduating from high school, Bad Bunny enrolled at the University of Puerto Rico at Arecibo, where he pursued courses in audiovisual communication. He split his time studying at the university and working as a bagger at the Supermercados Econo grocery store in Vega Baja. It’s during this time that he began releasing music on SoundCloud. Thanks to one of his earliest songs titled Diles, Bad Bunny landed a recording contract at DJ Luian’s Hear this Music label.

After signing to Hear this Music record label, Bad Bunny began to release music more seriously. His breakout single, Soy Peor, peaked at #22 on the Hot Latin Songs chart. The video to the song amassed more than 330 million views on YouTube within just ten months after its release.

The next few months after releasing his breakout single, Bad Bunny went on to collaborate with a slew of artists. Some of his most successful early collaborations include:

In May 2018. Bad Bunny eventually became an international star after collaborating with J Balvin in Cardi B’s single, I Like It. The song reached #1 on the US Billboard Hot 100. On October 11, 2018, the rapper released yet another sensational collaboration titled Mia, a joint project with Drake. The track reached the #5 spot on the Billboard Hot 100. The following month, Bad Bunny collaborated with Jennifer Lopez to release Te Guste. And on Christmas Eve 2018, he released his debut studio album, titled X 100pre.

Bad Bunny has since followed up with three more studio albums, including Oasis (with J Balvin, 2019), YHLQMDLG (2020), and El Último Tour Del Mundo (2020). His latest album, El Ultimo Tour Del Mundo, went down in history as the first Spanish-language album ever to top the US Billboard 200.

Like most successful rappers, Bad Bunny has received numerous awards and honors, including:

Bad Bunny has experienced a meteoritic rise to success over the four years he has been around. As of December 31, 2020, the rapper had a net worth of $16 million.

A huge portion of Bad Bunny’s wealth comes from his short but highly successful career as a rapper, singer, and songwriter.

In addition to album sales and concerts, Bad Bunny also earns from streaming and views, mostly on Spotify and YouTube, respectively.

Bad Bunny has been singing ever since he discovered his passions for music. Like many successful artists, the rapper’s musical career began at his local church choir.

2. Find a creative way to make up for your inadequacies

Although he was considered a shy student in high school, Bad Bunny chose to do freestyle raps as a way of rising above his esteem issues.

3. Stand out from the crowd

Bad Bunny not only stands out for his deep, slurred vocals, but also for his eccentric fashion style.

“Everyone has their style and your style explains a lot about who you are – you feel me? I’ve had style since childhood, so I like to dress how I feel. But maybe I get carried away by some trends.”

“I don’t want to be fake. I’m just being me. And I have the power to break stereotypes and whatever useless rules that society puts on us. “

“I grew up in a rural area called Vega Baja and I’m the first of so many talented people in this area to make it out. I take great pride to represent where I come from and I am able to show my fans and everyone who listens and watches me, that anything is possible.”

“I’ve always been surrounded by many great people and professors, but my family, especially my mom who was a teacher, was the person who encouraged me to study and pushed me to continue. When we’re young, we don’t understand why our parents bug us so much with school and doing homework, but it’s a blessing to have that support at home.”

“I’m from Vega Baja, a small area that’s not a metropolis like San Juan where the majority of the genre’s artists have come from. That’s what’s most surprising and incredible about this—I simply came from nothing, and that’s that. When I was at school, I used to stay on a balcony singing and people would stand around listening.”

Bad Bunny is one of the few rappers to have achieved remarkable success over a relatively short time span. With plenty of years ahead of him, it’s safe to predict that it will only be a matter of time before his fame and fortune grows tenfold.