Bro. If the popularization of the word ‘bro’ and the many, many puns you can make with (‘broseph’, ‘bromigo’, and so on) could be attributed to one man, all props go to Barney Stinson.

A character from the CBS drama/sitcom, How I Met Your Mother, Barney is a trendsetter. He’s fashion-forward with every bespoke suit he owns. Not only that, his theories and lingo have also pervaded through modern culture. With gems like the Bro Code, the Mermaid Theory, The Hot-Crazy Scale, The Platinum Rule – Barney is a modern-day philosopher.

And what can we get from philosophers? Itty, bitty nuggets of knowledge.

So, strap yourself down and wait for it – Barney Stinson 101 is in session.

Barney Stinson was born sometime in 1976 and is, as far as we know, a Scorpio. He has a half-brother named James. They both spend a good chunk of their childhood asking their single mother, Loretta, who their fathers are. For her part, Loretta would avoid the discussion. She had a tendency to lie and, once, even told Barney that Bob Barker was his father.

Or, well, it was less “told him” and more “pointed at the TV while The Price is Right was running.” James, being the older of the two, wised up to Loretta’s half-hearted lies early on. Barney, on the other hand, believed the Bob Barker story until he was in his 30s.

After a disastrous visit to the museum (wherein a whale-dislodging incident took place), Jerome walked out of Barney’s life. He left behind him the parting words, “Never stop partying”, which he’ll grow to regret a little ways down the road.

It’s established early on that Barney Stinson holds his friends, his bros especially, in high regard. He is caring and affectionate towards them. He uses everything at his disposal to make them feel better, including but not limited to his money and a vomit-green Fixer Elixir. So, it’s rare that there’s tension between him and the gang.

Instead, Barney’s character development progresses primarily through his romantic relationships.

Barney’s first serious girlfriend was Shannon. They worked together in a coffee shop and had plans to volunteer in the Peace Corps together. This was all ruined when Shannon left him for a rude man in a suit. Since then, Barney became the suit-wearing guy who sleeps around.

This is the beginning of Barney’s character arc. The goal of which is to have him stop lying to himself and, if time permits, to other people about what he wants.

Nora and Quinn Garvey are next, both of which marked slow, sure steps towards progress. With Nora, he faced his fear of a serious relationship and the idea that maybe he wanted to settle down. With Quinn, their relationship got to the brink of a wedding but wasn’t able to cross the threshold.

Robin was the pinnacle of his romantic progress. She was the on-off relationship he kept coming back to. They married.

Later on, though, one of Barney’s theories would come into play. After three years of marriage, Robin used his Freeway Theory and gave him an out. Barney, after vowing that he’d always be honest with her, took it. They divorced, and Barney was back to his old ways.

At the series finale,however, Barney made a misstep. Trying to accomplish a Perfect Month (a month of sleeping with different women each night), Barney gets a girl pregnant. Barney’s baby girl is named Ellie. And with her birth, Barney realizes what would make him happy and decides to settle down.

Thus, completing his arc. One of the last scenes we see of Barney is him scolding two young women for being in a bar on a school night and making their parents worry.

Outside of his catchphrases and theories, Barney Stinson is a stand-up guy. His flaws and later habits were signs of some deep emotional scarring. But Barney never seemed to let that get to him.

He’s optimistic, fun, and absolutely driven. He accomplished everything he set his mind to. And, except for the couple of times his mind was set on revenge, he always goes to great lengths to save the day for his friends.

Barney is both the friend everyone wants to have and the person they want to become. He’s flawed but wholly capable of change. He went from a nobody in his childhood to the epitome of awesomeness in his adulthood. In a single word: Barney Stinson was legendary.

Here are some quotes to keep in mind for whenever you’re feeling less-than-awesome. 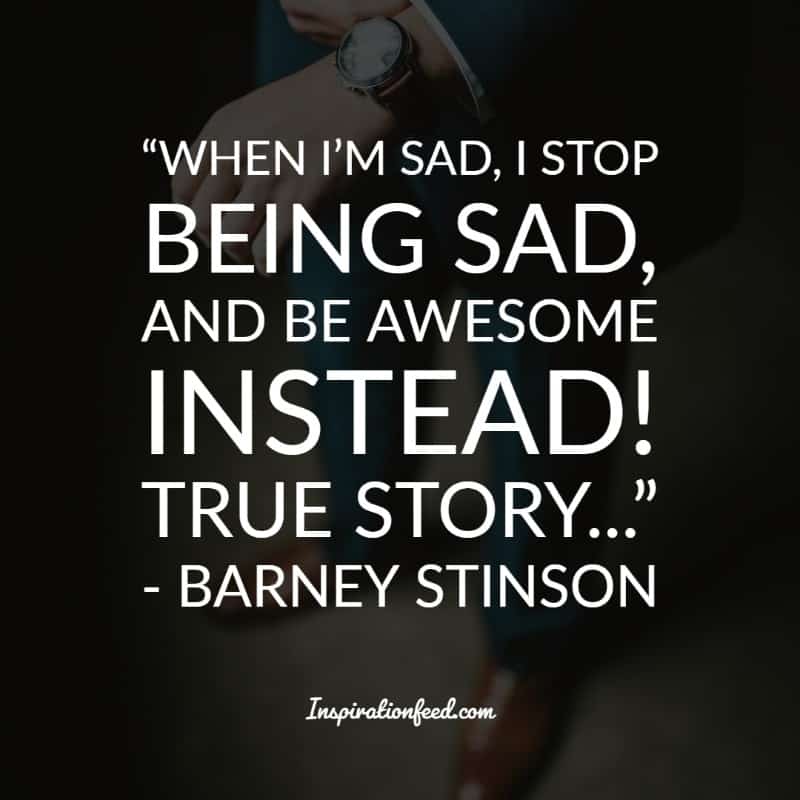 “When I’m sad, I stop being sad, and be awesome instead! True story…” – Barney Stinson 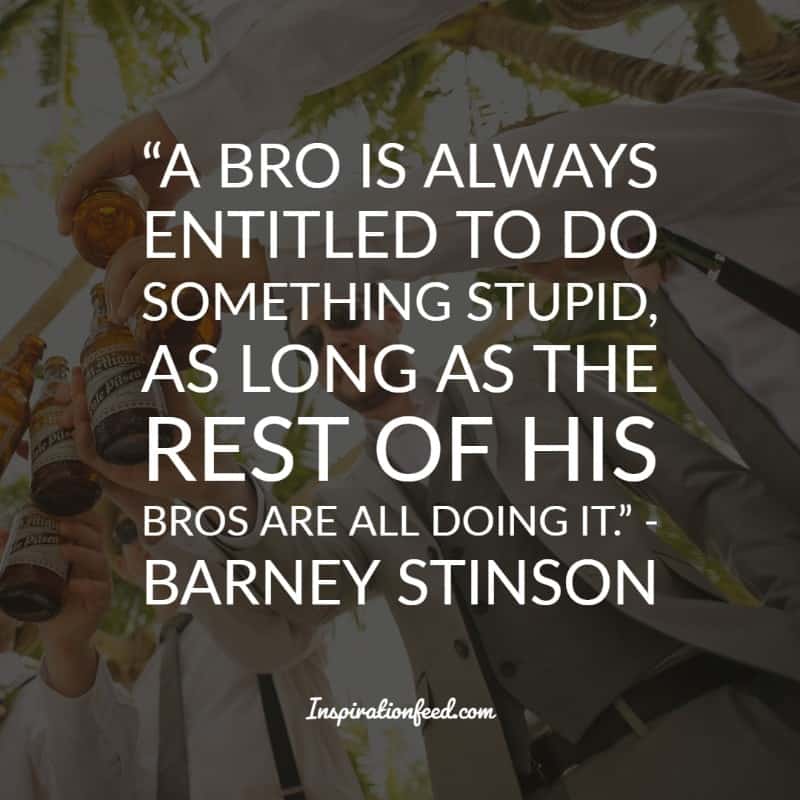 “A Bro is always entitled to do something stupid, as long as the rest of his Bros are all doing it.” – Barney Stinson 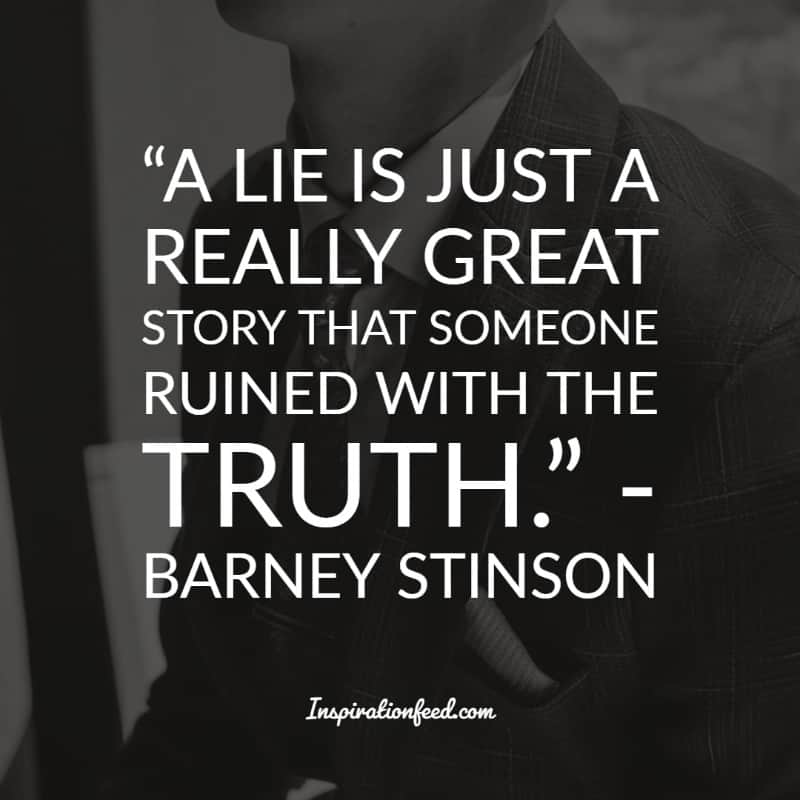 “A lie is just a really great story that someone ruined with the truth.” – Barney Stinson 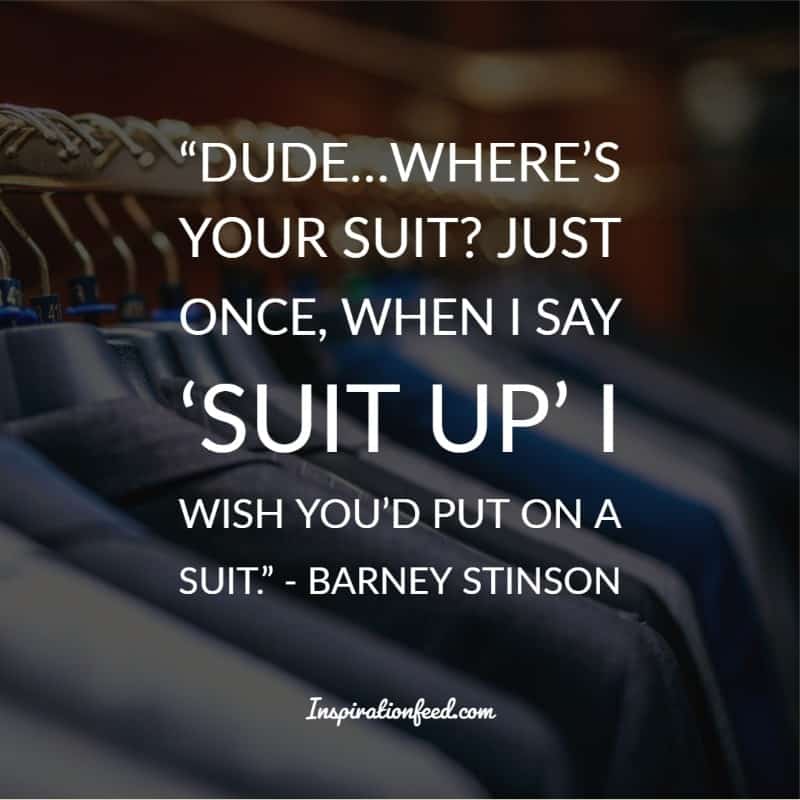 “Dude…where’s your suit? Just once, when I say ‘suit up’ I wish you’d put on a suit.” – Barney Stinson

“Ted, I believe you and I met for a reason. It’s like the universe was saying, hey Barney, there’s this dude, he’s pretty cool, but it is your job to make him awesome.” – Barney Stinson 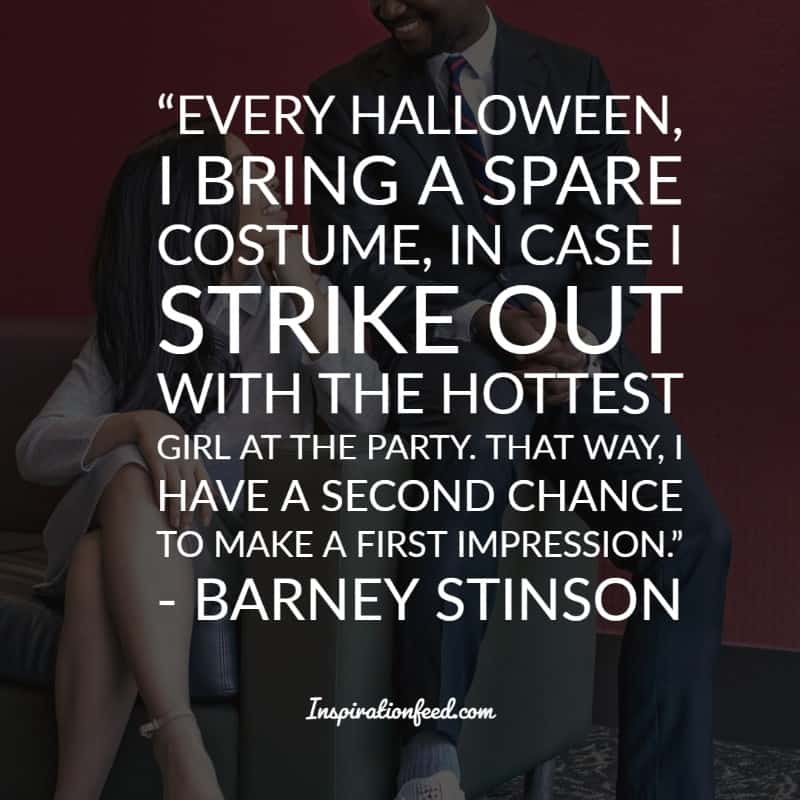 “Every Halloween, I bring a spare costume, in case I strike out with the hottest girl at the party. That way, I have a second chance to make a first impression.” – Barney Stinson 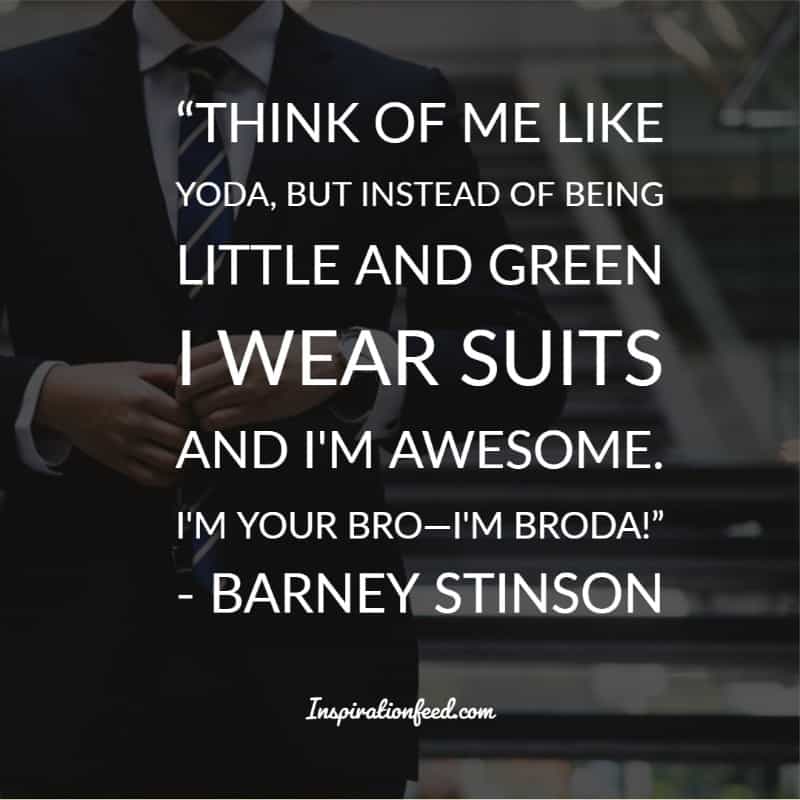 “Think of me like Yoda, but instead of being little and green I wear suits and I’m awesome. I’m your bro—I’m Broda!” – Barney Stinson 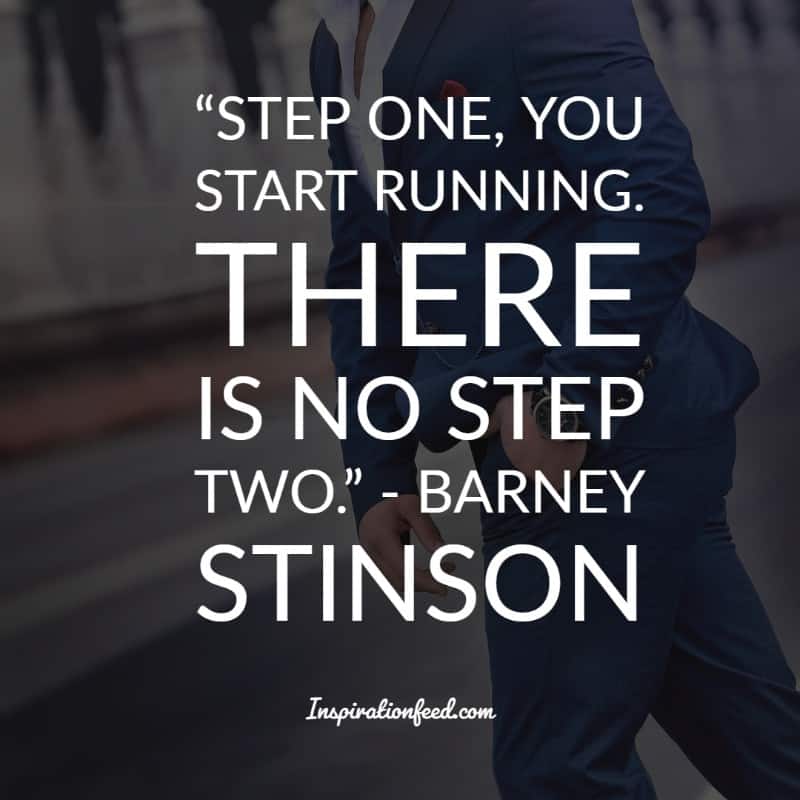 “Step one, you start running. There is no step two.” – Barney Stinson 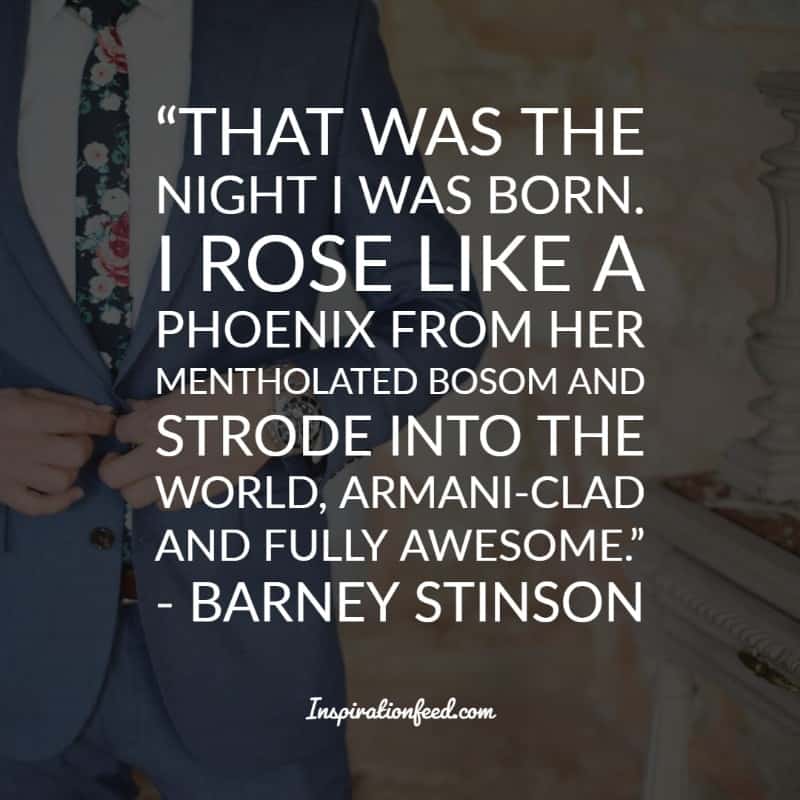 “That was the night I was born. I rose like a phoenix from her mentholated bosom and strode into the world, Armani-clad and fully awesome.” – Barney Stinson 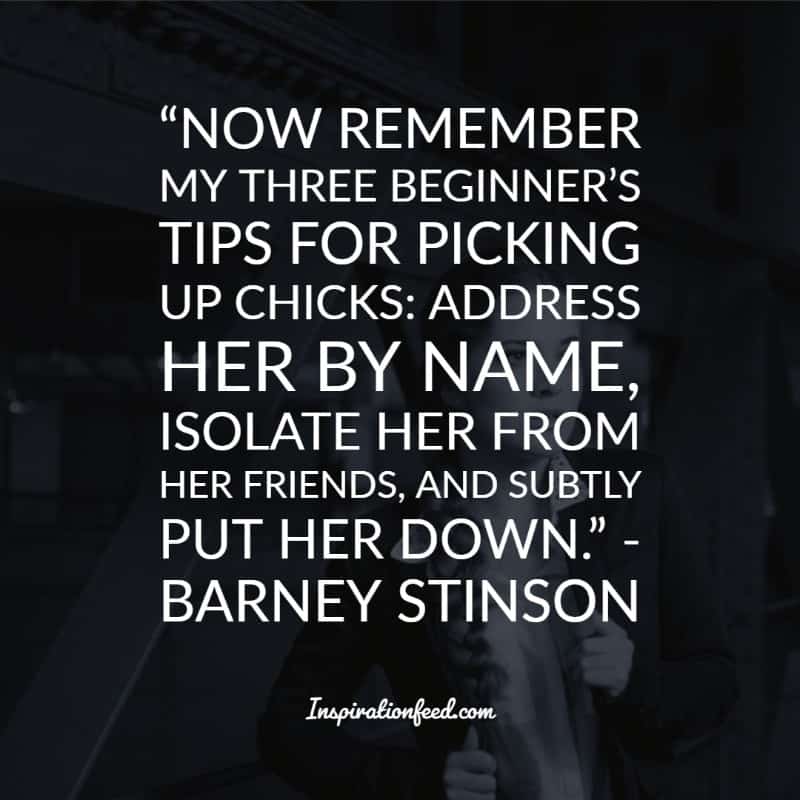 “Now remember my three beginner’s tips for picking up chicks: Address her by name, isolate her from her friends, and subtly put her down.” – Barney Stinson 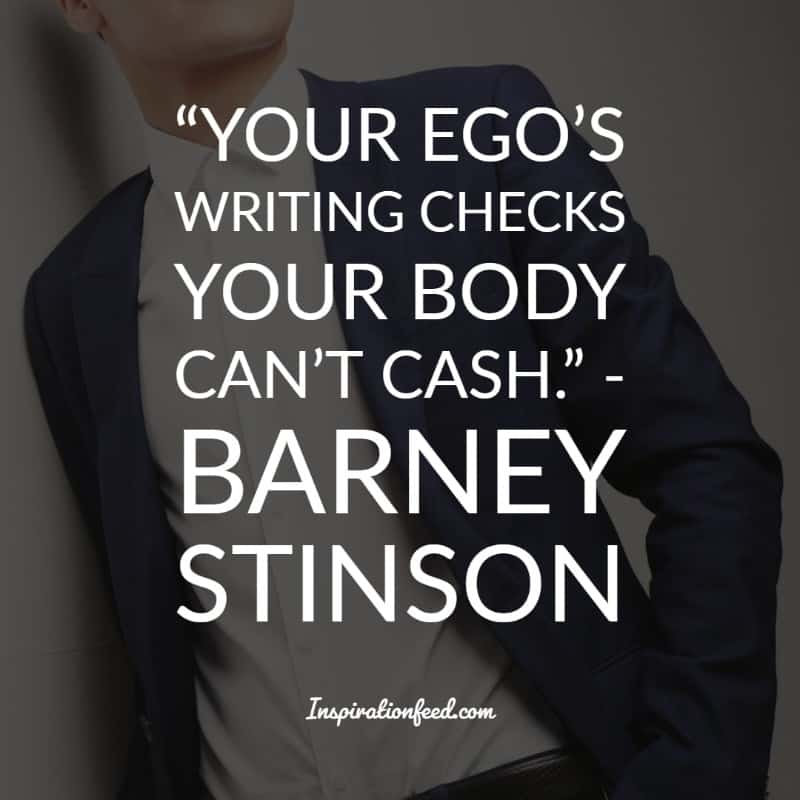 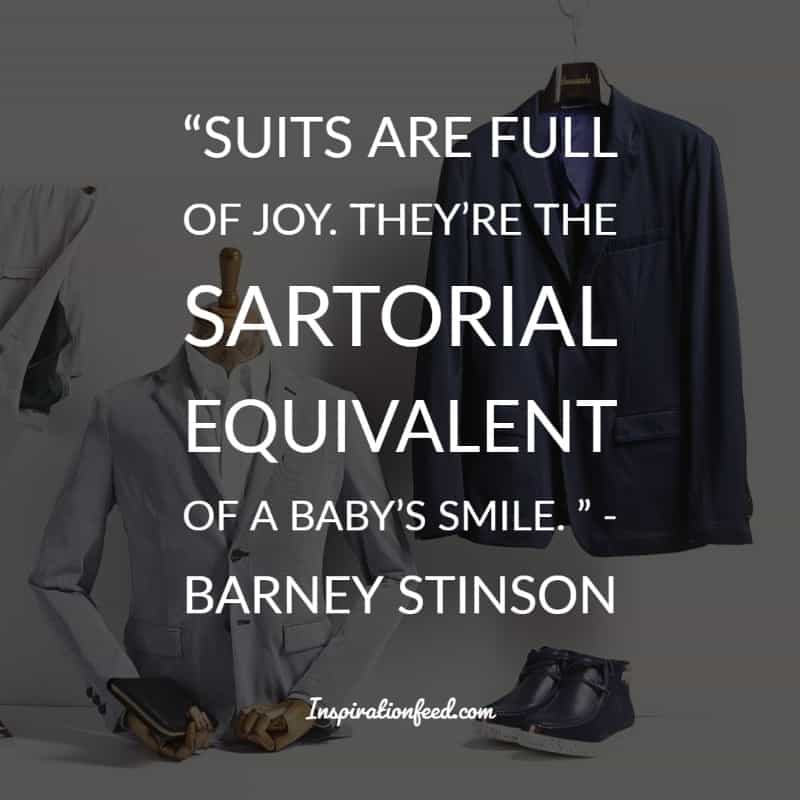 “Suits are full of joy. They’re the sartorial equivalent of a baby’s smile. ” – Barney Stinson 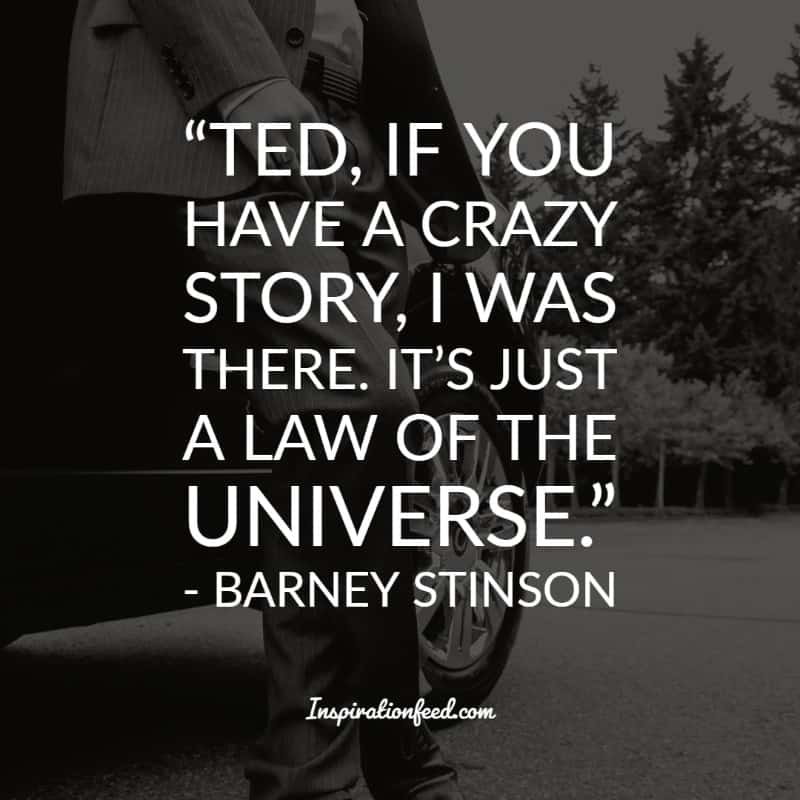 “Ted, if you have a crazy story, I was there. It’s just a law of the universe.” – Barney Stinson 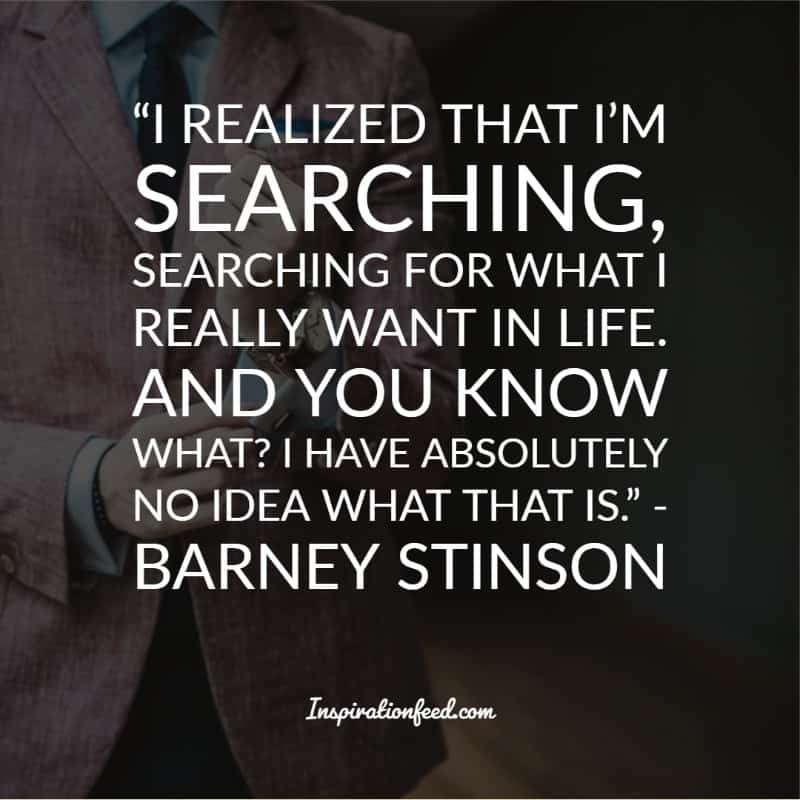 “I realized that I’m searching, searching for what I really want in life. And you know what? I have absolutely no idea what that is.” – Barney Stinson 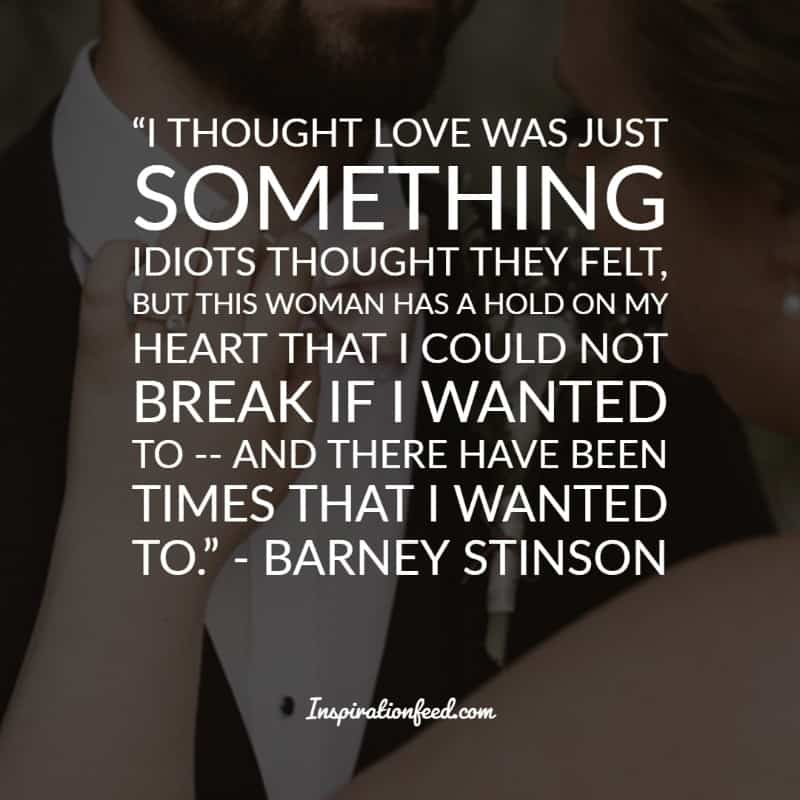 “I thought love was just something idiots thought they felt, but this woman has a hold on my heart that I could not break if I wanted to — and there have been times that I wanted to.” – Barney Stinson 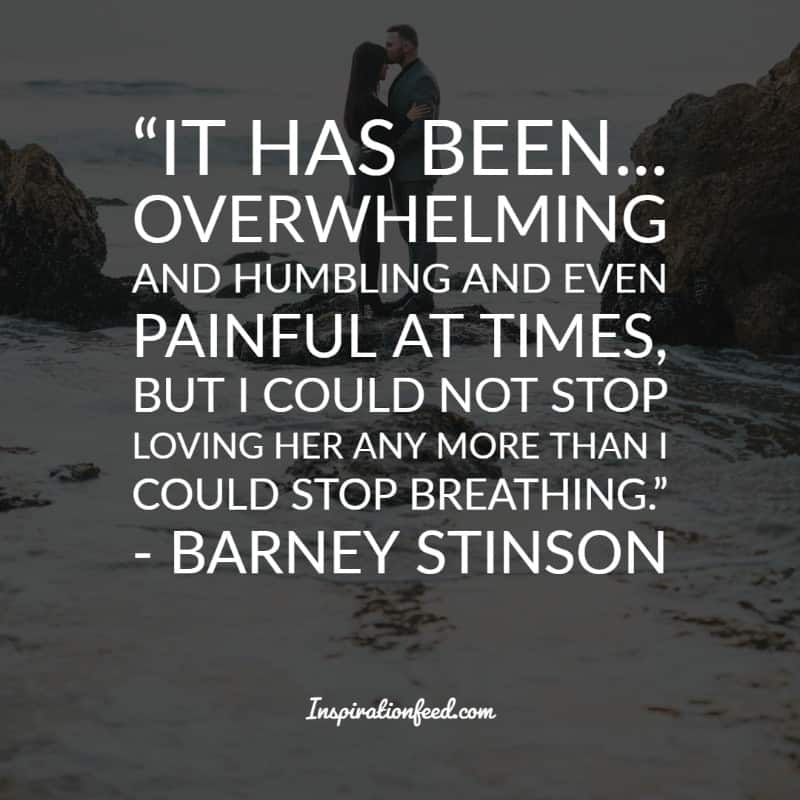 “It has been… overwhelming and humbling and even painful at times, but I could not stop loving her any more than I could stop breathing.” – Barney Stinson “You and Marshall belong together. The two of you have something most people search their whole lives for and never find. I know you love him and if you knew what he was going through right now you wouldn’t be here for one more second.” – Barney Stinson 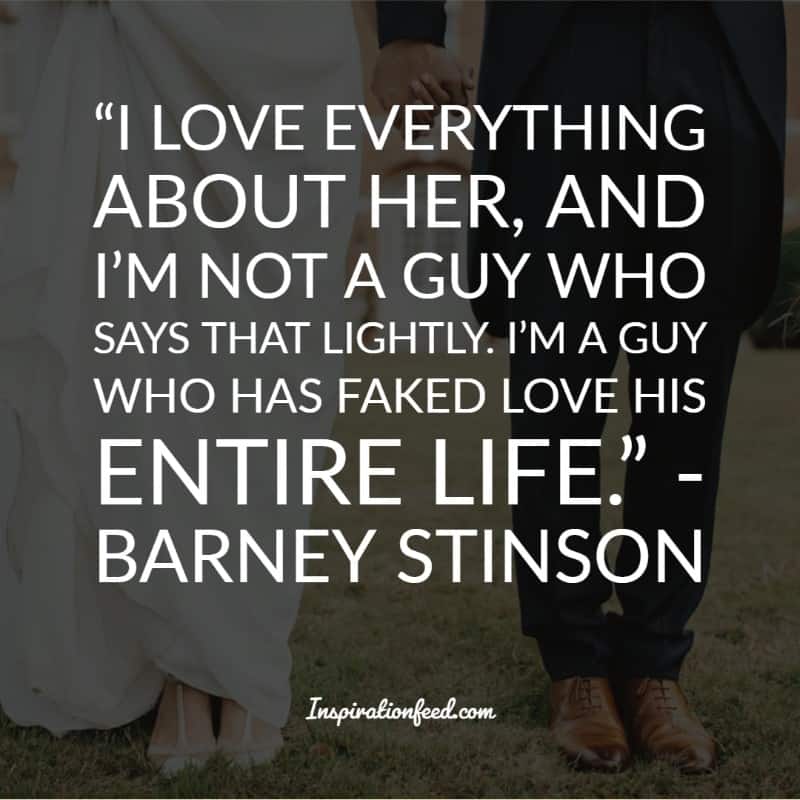 “I love everything about her, and I’m not a guy who says that lightly. I’m a guy who has faked love his entire life.” – Barney Stinson 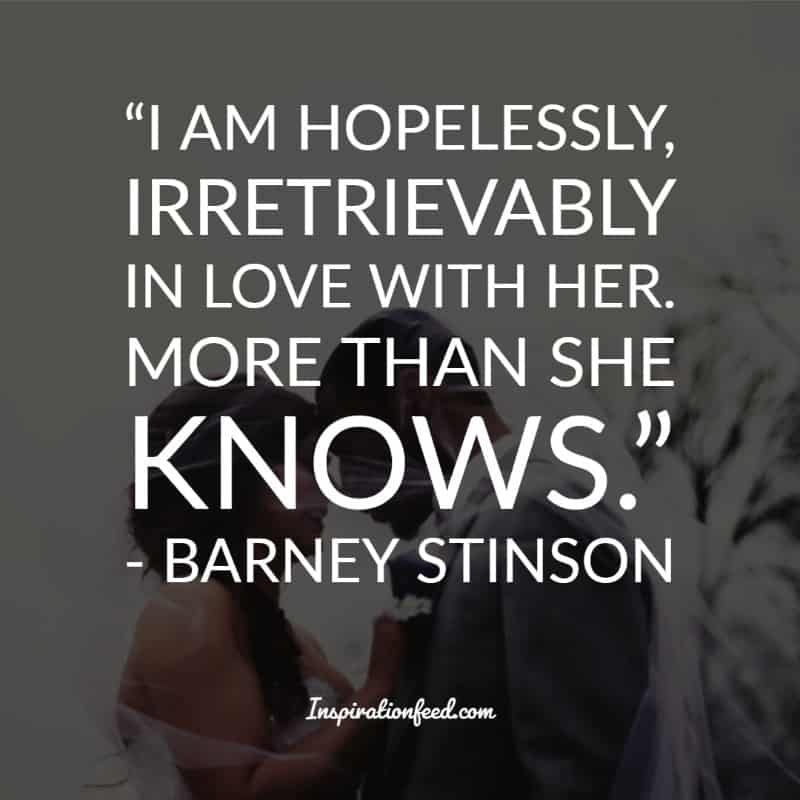 “I am hopelessly, irretrievably in love with her. More than she knows.” – Barney Stinson 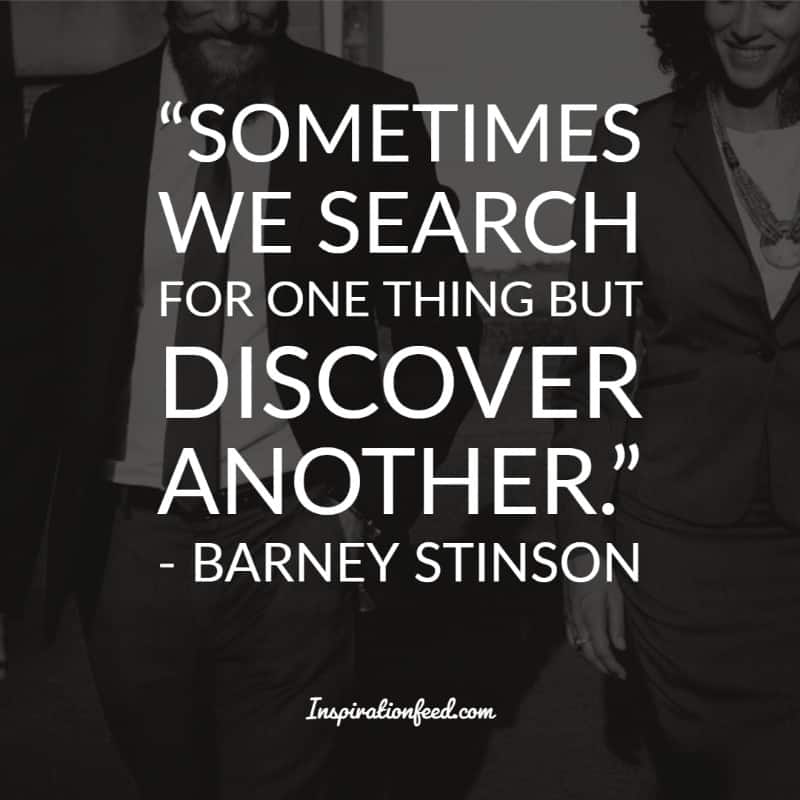 “Sometimes we search for one thing but discover another.” – Barney Stinson 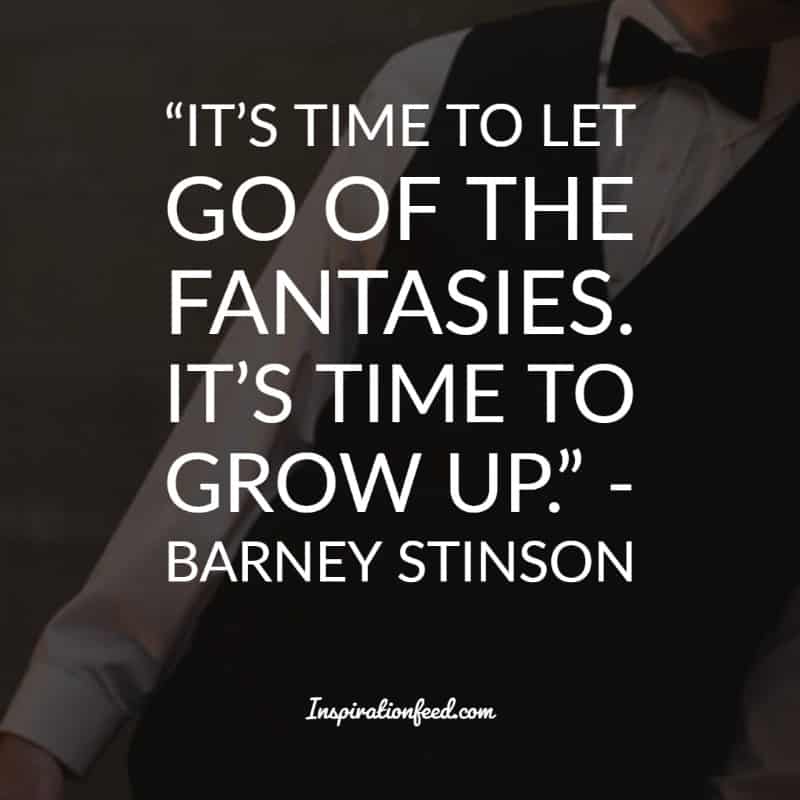 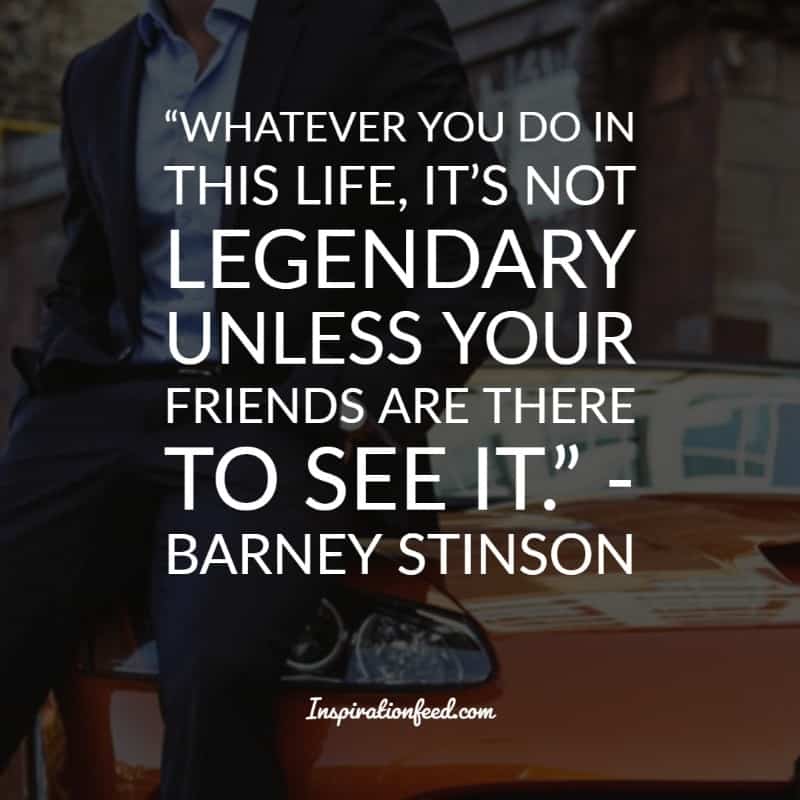 “Whatever you do in this life, it’s not legendary unless your friends are there to see it.” – Barney Stinson 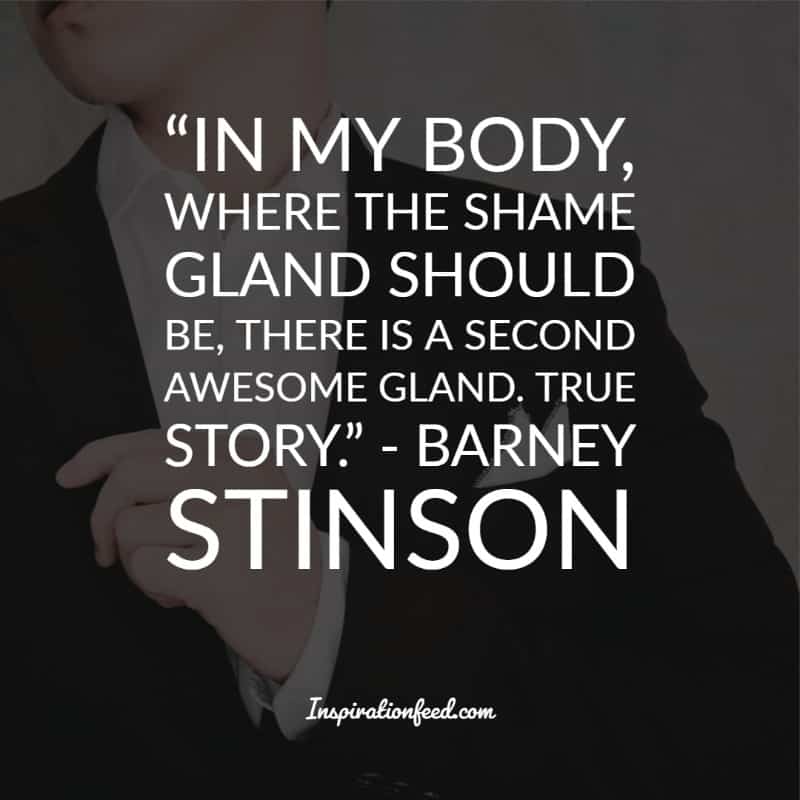 “In my body, where the shame gland should be, there is a second awesome gland. True story.” – Barney Stinson 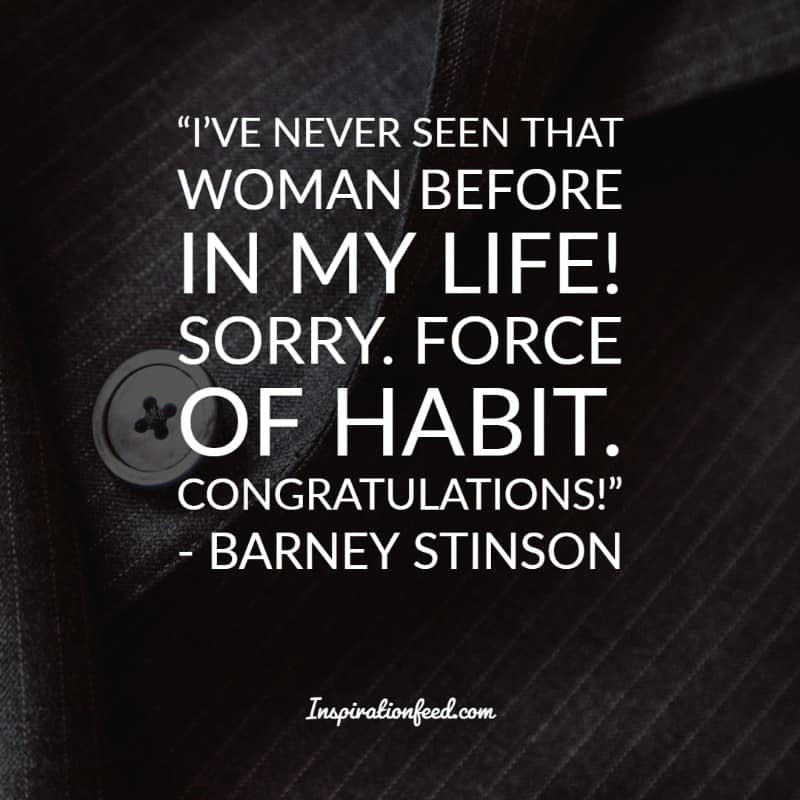 “I’ve never seen that woman before in my life! Sorry. Force of habit. Congratulations!” – Barney Stinson 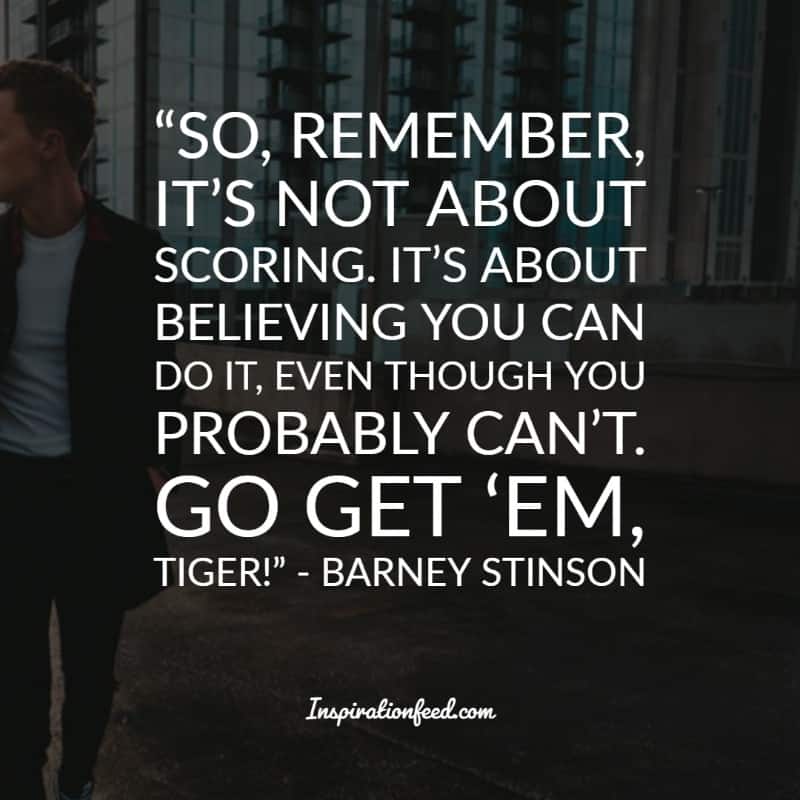 “So, remember, it’s not about scoring. It’s about believing you can do it, even though you probably can’t. Go get ‘em, tiger!” – Barney Stinson