Want to play Spotify Music on MP3 players? Need to burn Spotify songs to a CD? Prefer saving Spotify music to a USB drive to play in the car? Do you want to download songs and playlists from Spotify without a Premium account? You may probably know that a Spotify Music Converter could help you solve all problems. 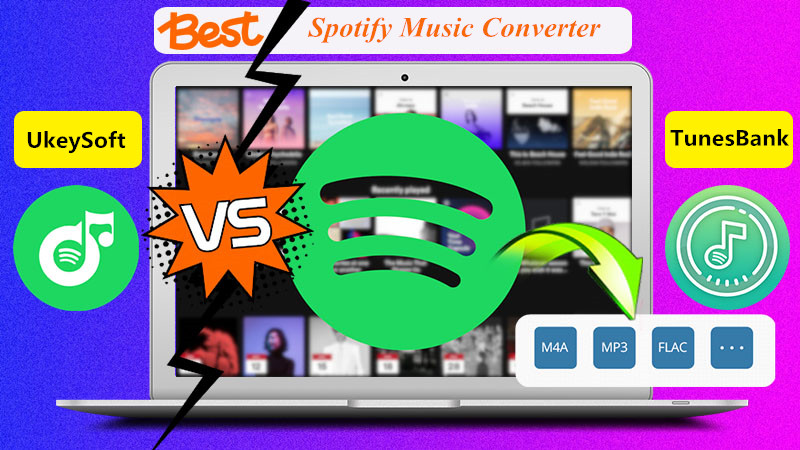 Why Do You Need a Spotify Music Converter?

As we all know, Spotify Music is a subscription-based streaming music service. Spotify free users can only stream Spotify songs with advertisements online, and the sound quality is relatively low. Although Spotify subscribers can download Spotify music for offline listening during the subscription period, they can’t save Spotify songs as local files, copy or transfer Spotify music to their own devices, upload Spotify Music to Google Drive, etc.

Moreover, once the subscription expires, you will no longer be able to access any Spotify Music songs, regardless of whether the song has been added to your music library or downloaded to your device. This is because Spotify Music uses a specific OGG format and adds DRM encryption.

In this case, to break these restrictions, you may use a Spotify Music Converter to remove DRM from Spotify music and convert them to common MP3, M4A, FLAC, and other formats, so that you are able to save Spotify songs on your computer forever, use Spotify Music freely, or transfer them to any media player or devices for offline playback, including Windows Media Player, Windows VLC Media Player, QuickTime Player, MP3 player, Android, iPhone, iPad, iPod Nano, iPod Touch, iPod Shuffle, iPod Classic, Sony Walkman, SanDisk MP3 player, PS4, PS5, PSP, Zune, Activo CT10, FiiO M11/M15, Car Players, Google Pixel, etc. 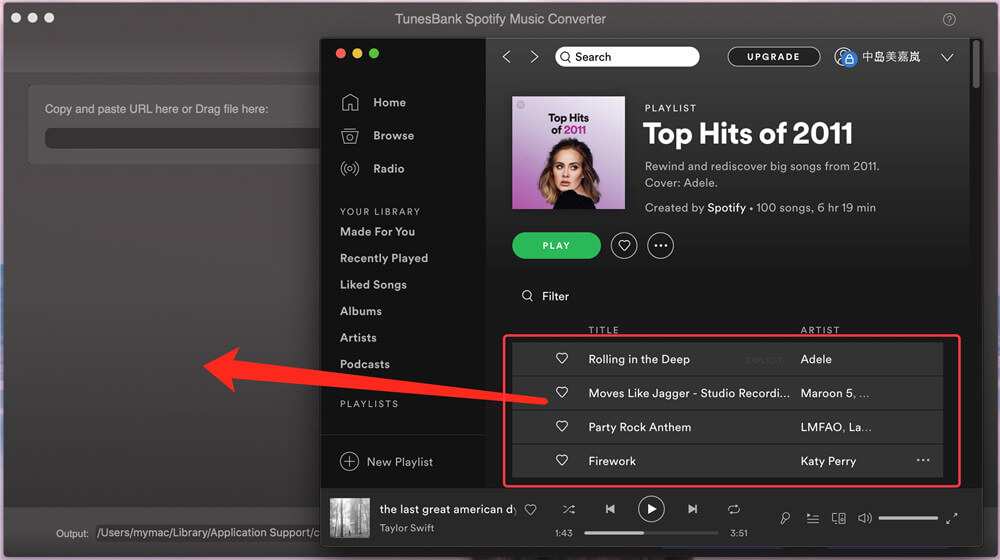 Spotify songs are in DRM-locked OGG format and cannot be played without the Spotify app. An excellent Spotify music converter should be capable of converting Spotify songs to popular audio formats. There are many formats of digital music, the most popular are the MP3 format.

Converting Spotify music to MP3 audio format means that most digital devices and media players can play them. In addition, M4A is also loved by many Apple users. M4A is a format independently developed by Apple and has been widely used in iTunes and iPod series products. FLAC is a good choice to store music in lossless. 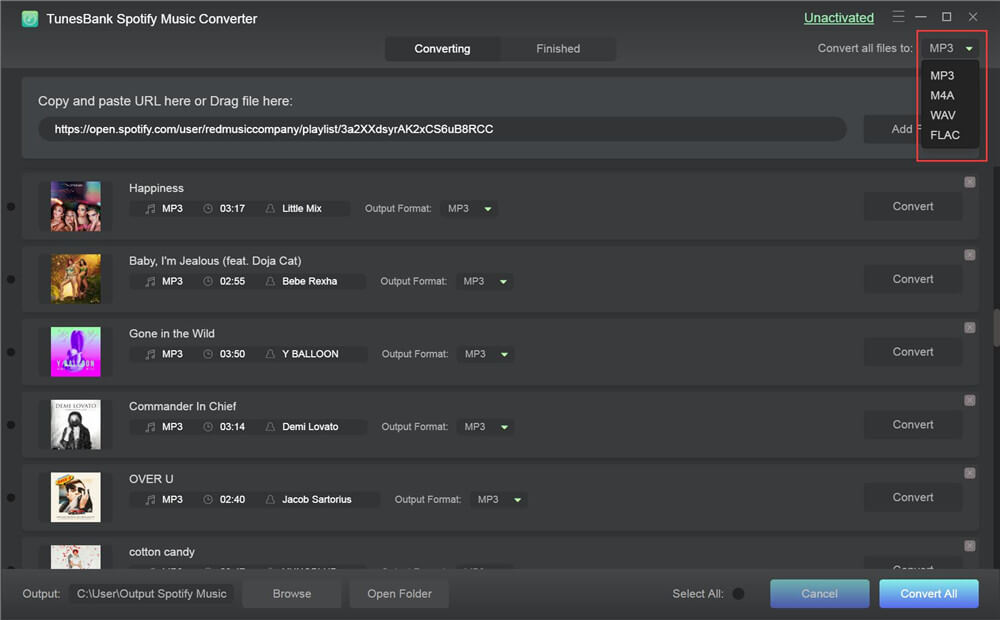 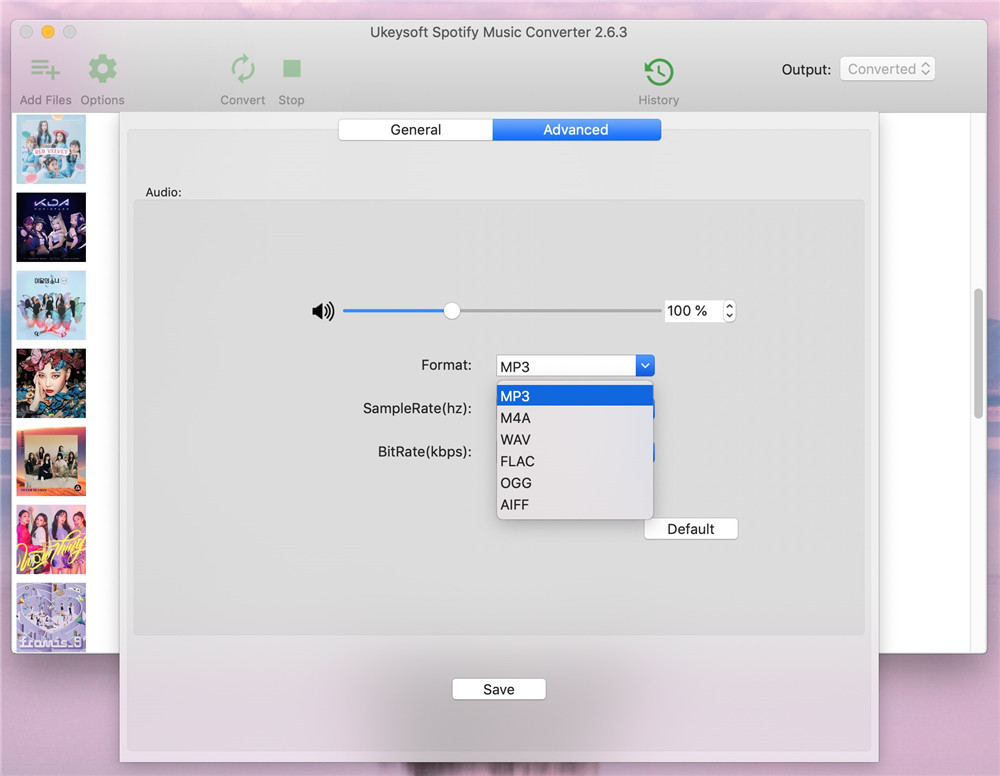 Obviously, in terms of output format, UkeySoft is better than TunesBank and supports more formats. In addition, it is worth mentioning that TunesBank supports converting each Spotify song to a different format.

Most audio players and devices rely on ID3 tags to correctly display artist and song-title information during playback. ID3 is the metadata container most commonly used in conjunction with the MP3 audio file format. 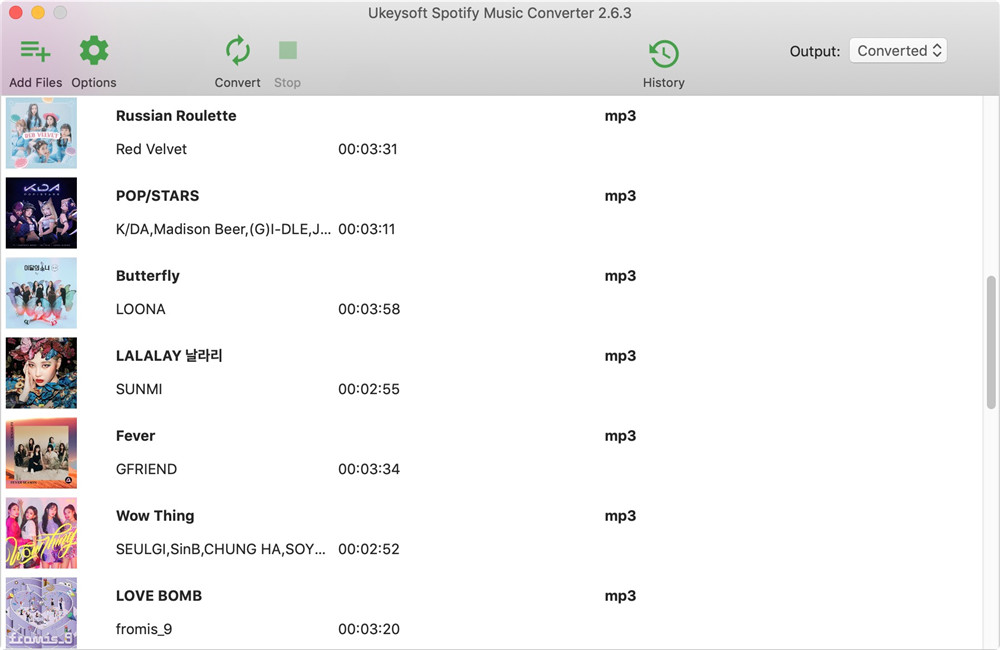 It allows information such as title, artist, album, track number, genre and more about the file to be stored in the file itself. Therefore, it is very important to keep Spotify’s ID3 tags. Luckily, both TunesBank and UkeySoft Spotify Music Converter can convert Spotify songs to MP3 or M4A format with ID3 tags kept. 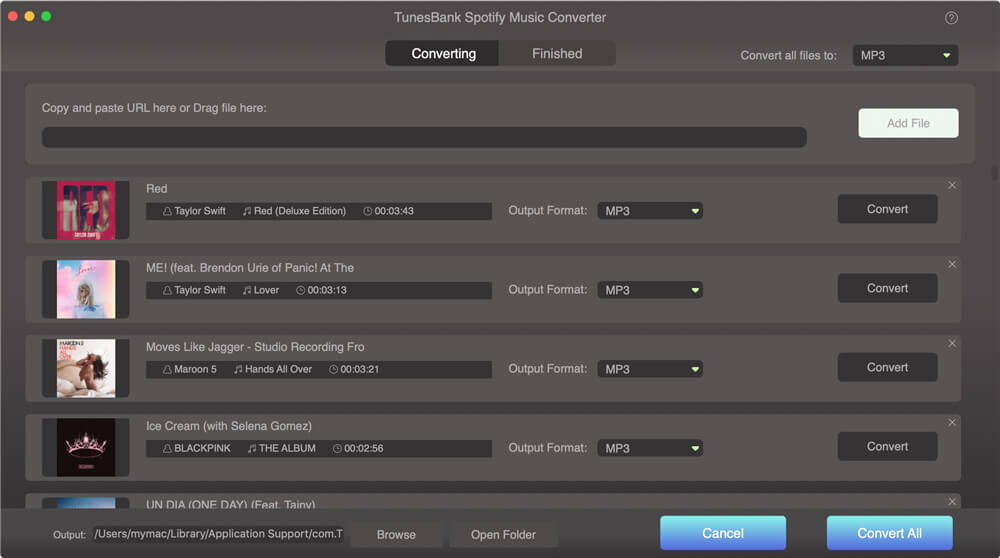 If there are thousands of songs in your Spotify playlist, then choosing a fast Spotify music converter can save you time. TunesBank Spotify Music Converter and UkeySoft Spotify Music Converter claim that they support batch conversion and can convert Spotify music at up to 5 times the speed. During the test, we performed operations on Mac and Windows PC respectively and finally determined the time it takes for the two software to convert the same 5 and 60 Spotify tracks into 320kbps MP3 files.

Both Spotify music converters are paid software, but the price is very reasonable. They both provide a free trial version that allows you to convert each song in the first 3 minutes, and there is a 30-day trial period. 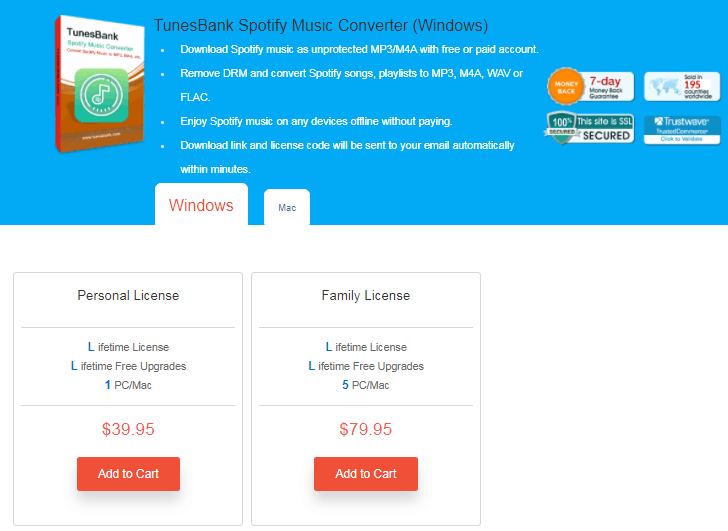 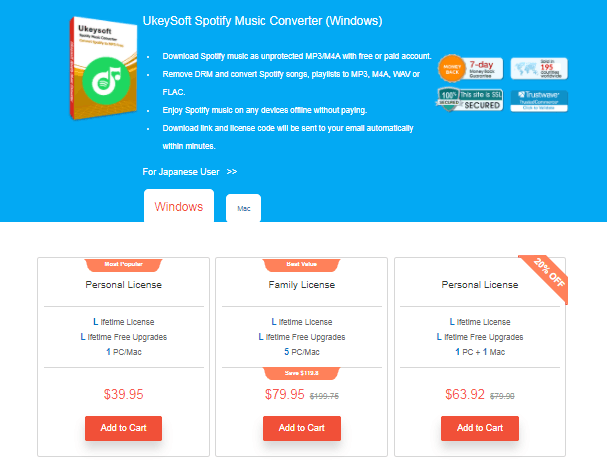 For Windows users, you can use either TunesBank or UkeySoft. If you use Mac OS X 10.9, just use UkeySoft Spotify Music Converter.

How to Convert Spotify Music to MP3 with TunesBank

During the testing process, we found that both converters are easy to use, with a simple interface, without any ads, here we will show you the detailed tutorial on how to use TunesBank to convert Spotify music and playlist to MP3.

Step 1. Download, install and launch TunesBank Spotify Music Converter on the Mac or PC. Then Spotify app will be opened automatically. 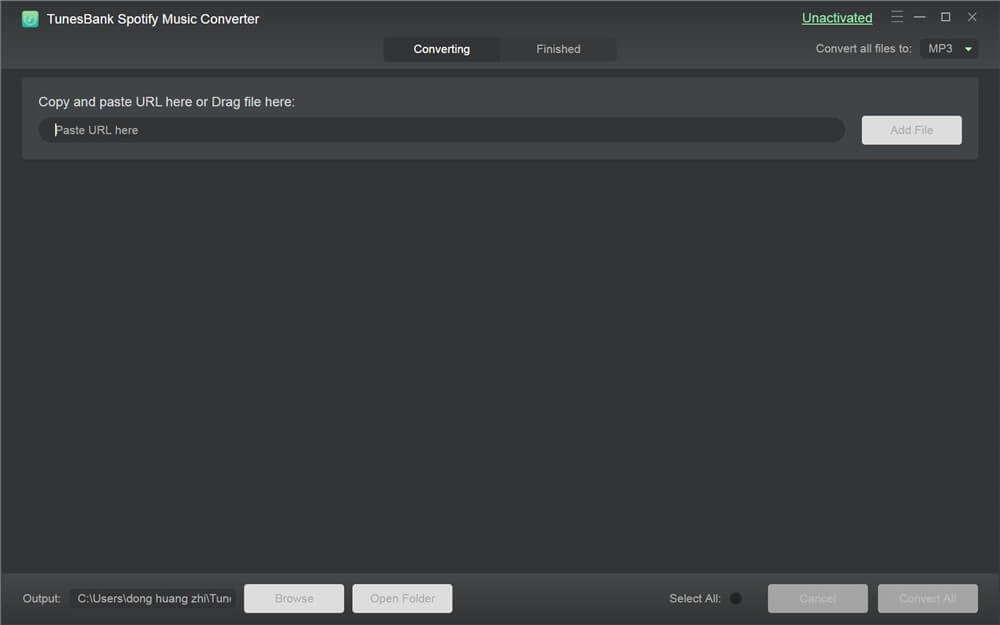 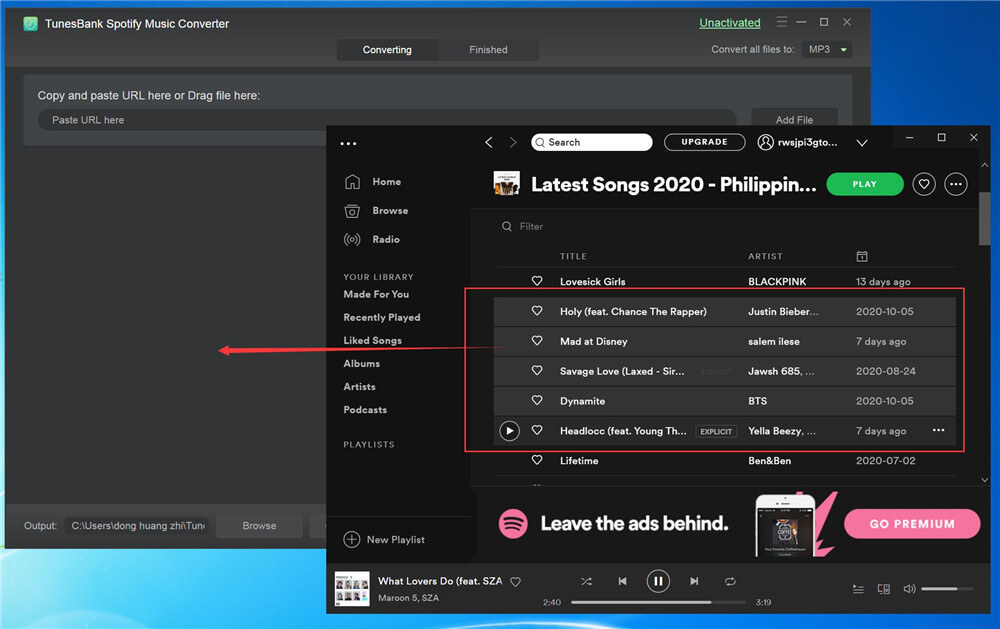 Or copy the link of the song/playlist of Spotify, and paste the link to TunesBank’s search bar. Then click the “Add File” to import the songs. 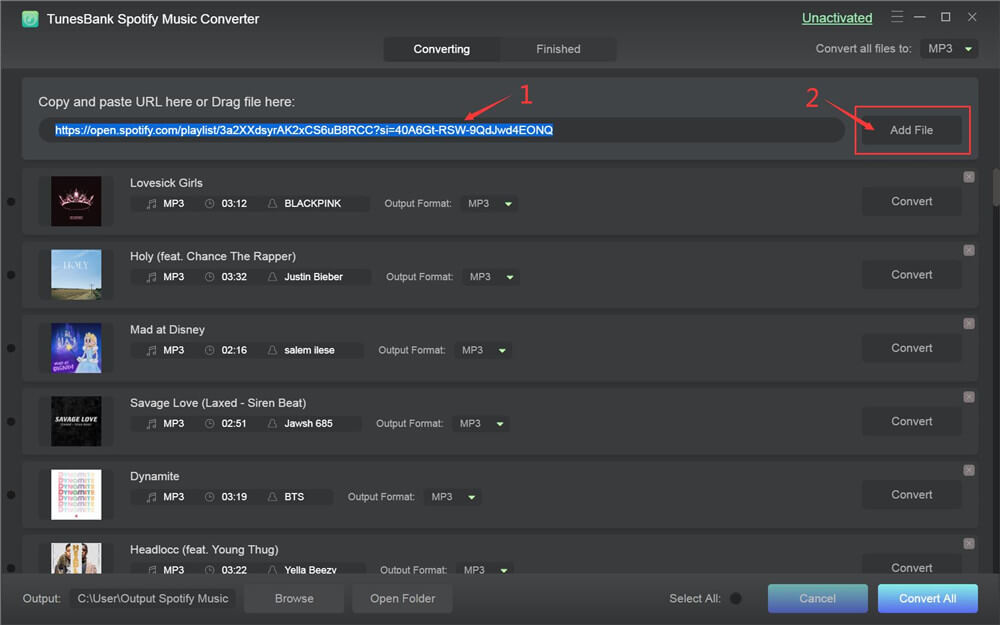 Step 3. You can click the  “Convert all files to” options to select MP3 format for all the imported Spotify songs. You can also convert some songs to different audio formats, just go to “Output Format:” option next to each song. 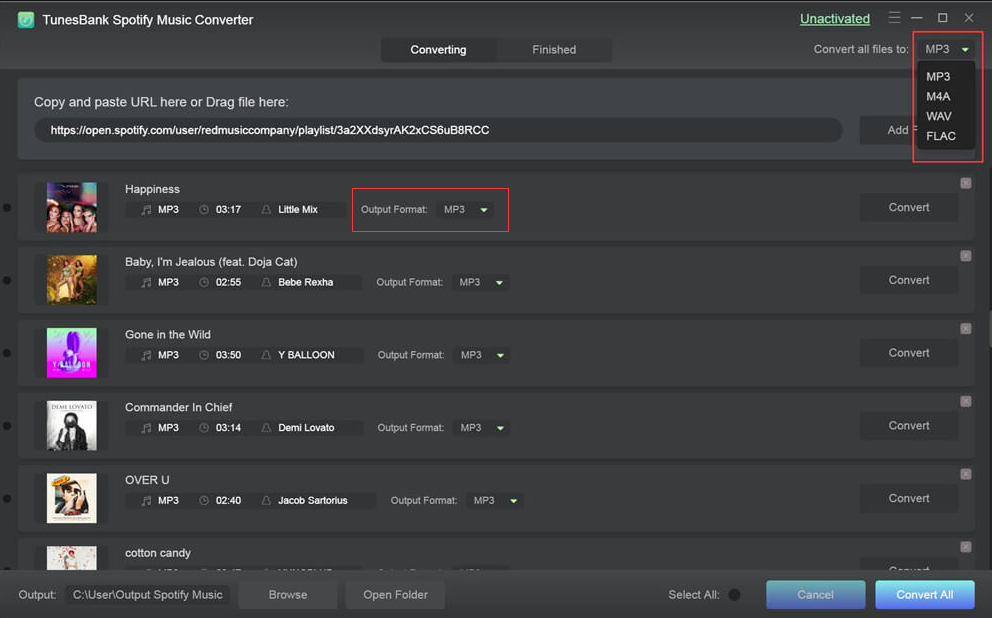 Step 4. Click on “Preferences” menu, in the pop-up window, you are allowed to change the Output Path, Bitrate, Sample Rate as needed. 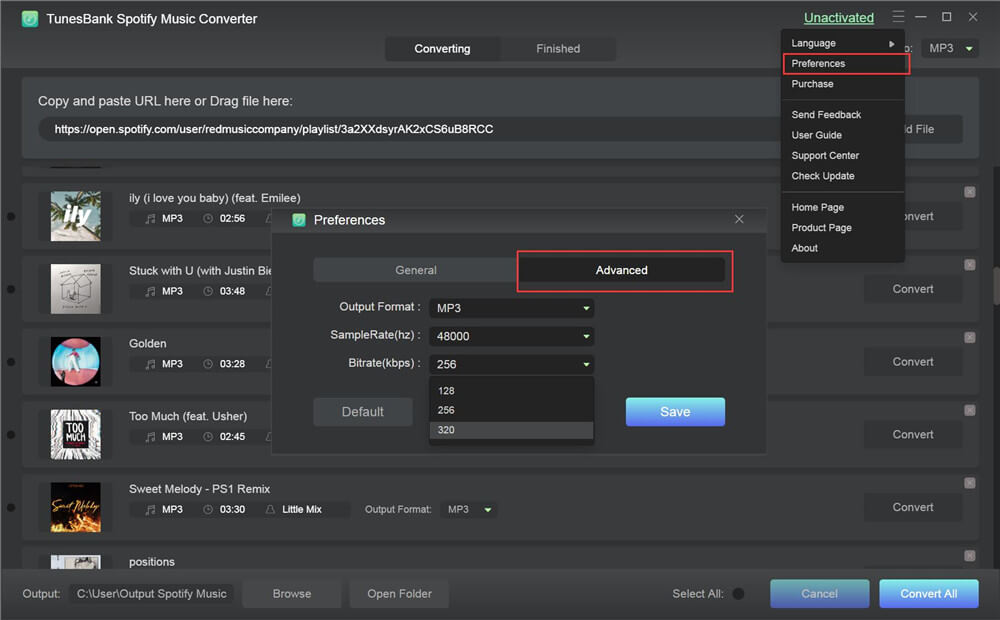 Step 5. Click the “Convert All” button to start converting Spotify music and playlist to MP3 audio files. After conversion, you can go to “Finished”, and click “View Output File” to find the converted Spotify songs. We believe that no matter which of the 2 Spotify Music Converters you have purchased, it can help you batch convert Spotify songs and save high-quality audio in most popular formats such as MP3, M4A, FLAC, etc.

As far as the output format is concerned, UkeySoft Spotify Music Converter provides more choices, but it is not as good as TunesBank which can choose a different format for each song. When converting Spotify music to MP3 files using these 2 great tools, all the ID3 tags and metadata will be well preserved.

Their conversion speed can reach 5 times, which can save you time and let you quickly get high-quality Spotify songs. In terms of price, UkeySoft provides one more option. In terms of compatibility, they can all run perfectly on Windows 10/8.1/8/7. UkeySoft can support Mac OS X 10.9 or higher, while TunesBank supports Mac OS X 10.11 or higher. Just choose the suitable one!