There’s something about black nail polish that turns heads. Maybe because it is usually associated with rebellious, unmanageable behavior. Or perhaps it’s the sleek, dark aura of it. No matter the reason, plenty of women (and even men) favor this color during their mani-pedi sessions.

You’re probably familiar with the psychology of color. This study examines how color affects our lives, especially our behavior and perception of things. Black, for instance, is often linked to secrecy, mystery, and power. But surprisingly, it’s also connected with creativity, confidence, and positive leadership. 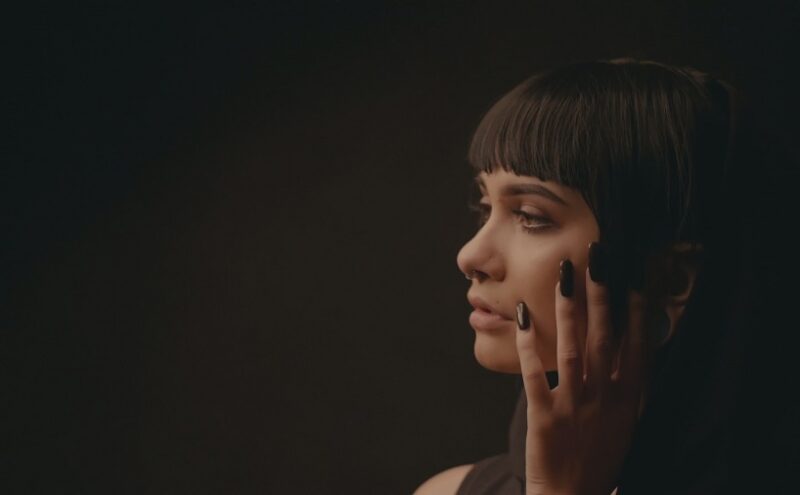 If you love black nails, here are some fun facts about your favorite polish:

Black isn’t just for edgy, punk, or mysterious individuals. Wear black when you want to look sexy or sophisticated. Choose it to feel more powerful, enigmatic, and in control. Black is a wonderful option for everyday wear because it won’t clash with anything. Even celebrities have donned them on the red carpet!

Black is beautiful – as proven by these cool black nail designs. Check them out and see which ones you’re going to copy today. 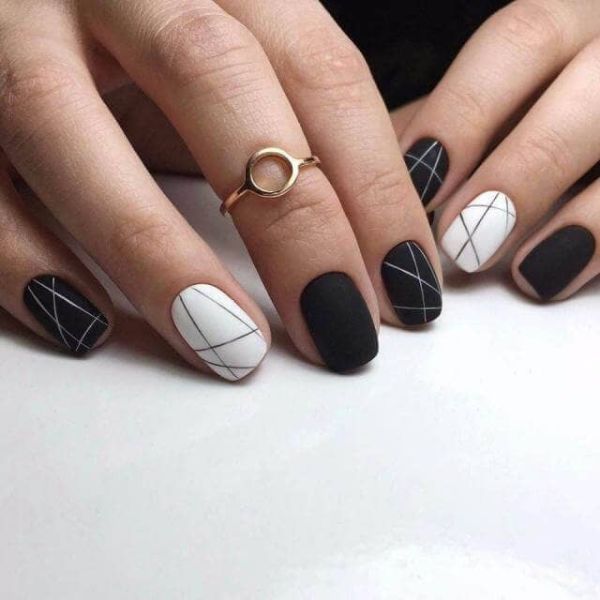 Credits to Walmart via The Cuddl

Straight geometric lines cut through the semi-matte black-and-white tones in this modern look. 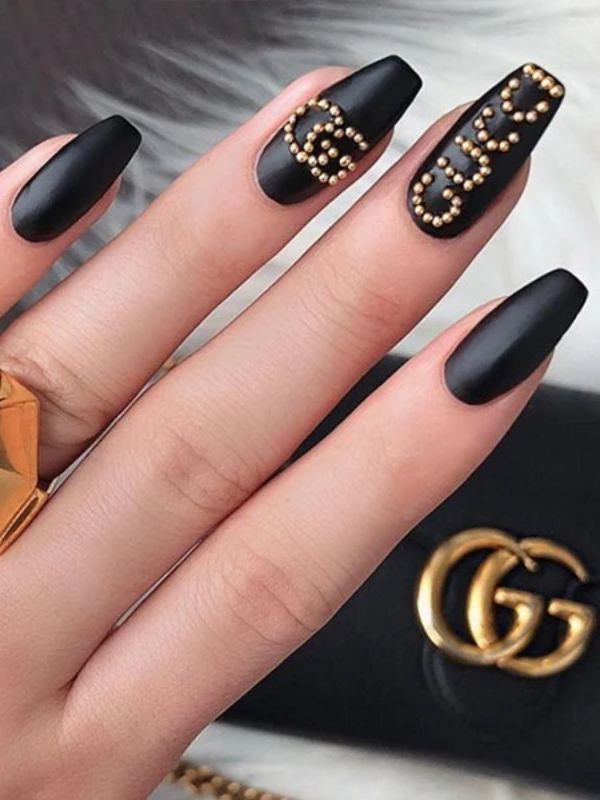 Pay tribute to your fave luxury brand by wearing them on your digits in gold-and-black. 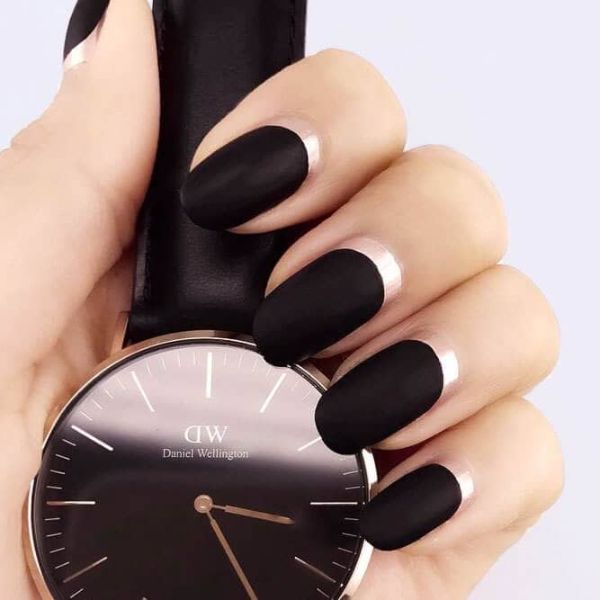 Credits to Karen Gutierrez via The Cuddl 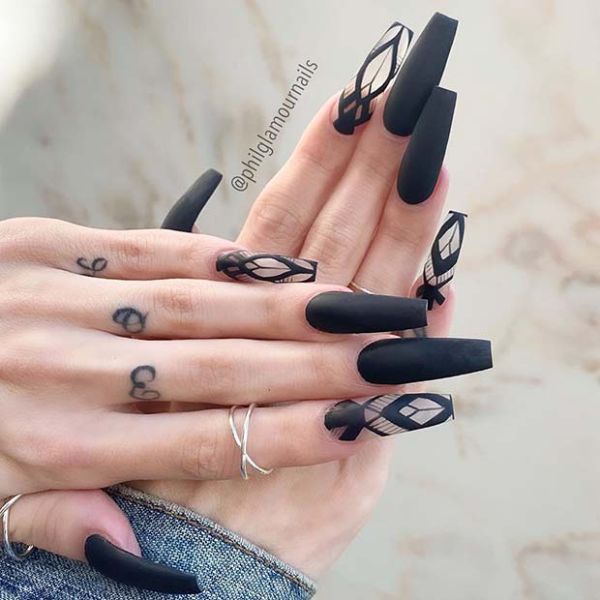 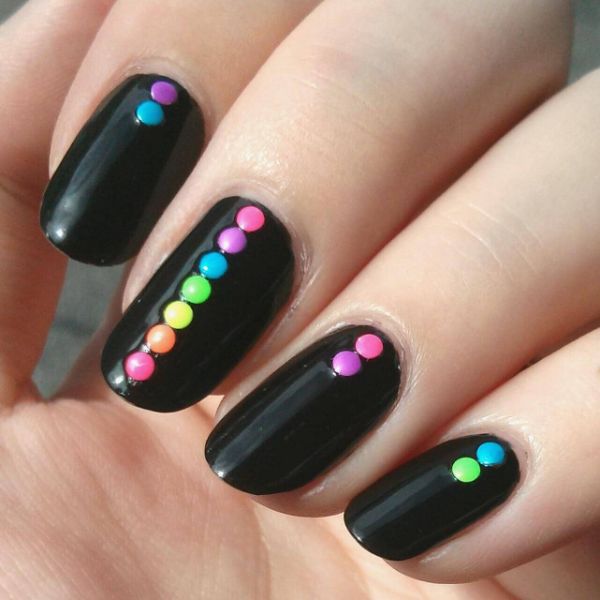 Credits to Keriannsbrizzi via The Cuddl

This easy short black nail idea is great for both kids and adults. 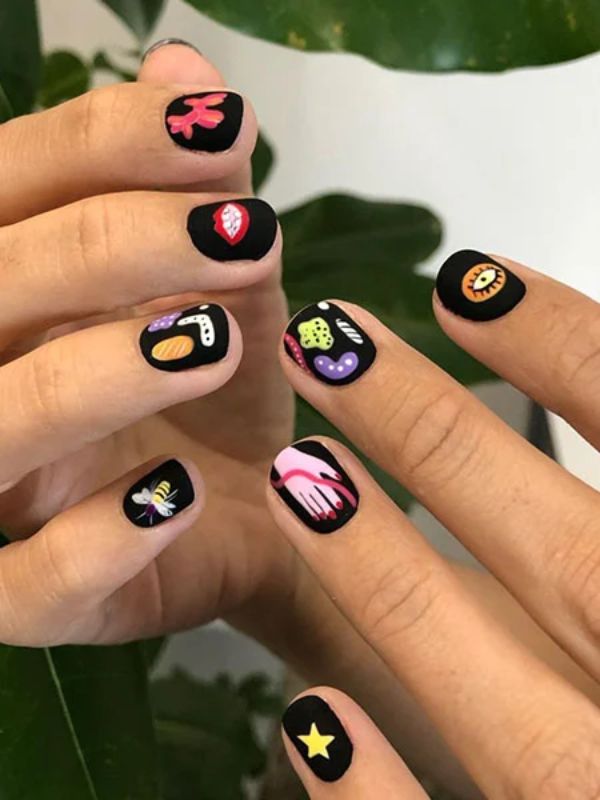 Add doodles to otherwise plain black nails to bring out your fun, quirky side. 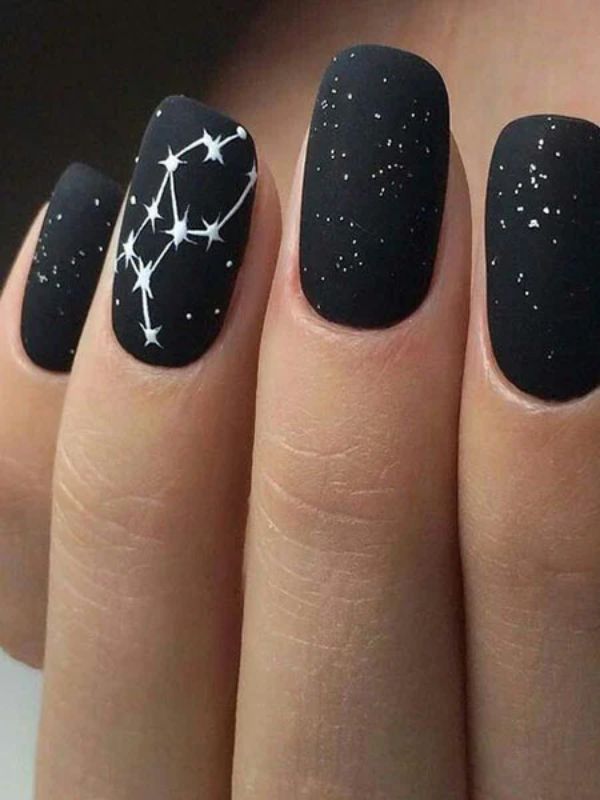 Get creative by showing off your astrology sign right on your digits. 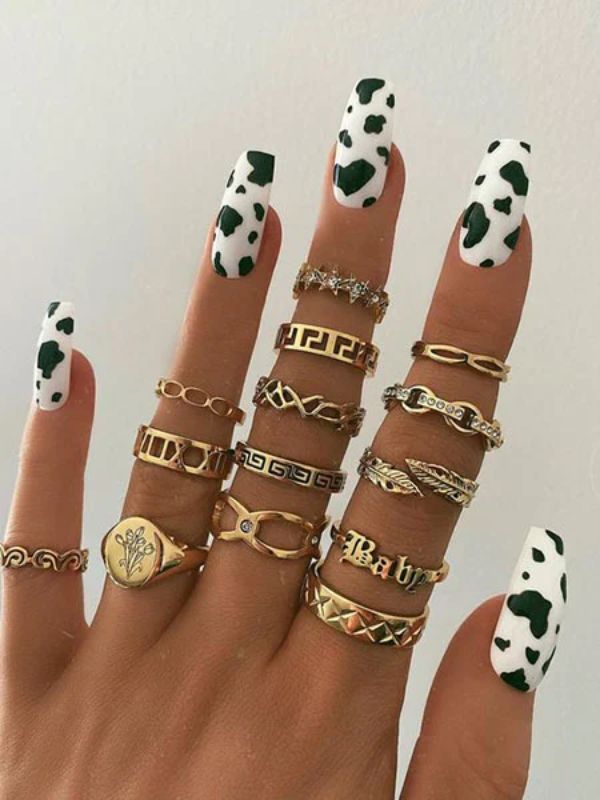 Credits to Bohomoon via The Trend Spotter

Who could say no to charming cow prints? They’re adorable, classy, and definitely wearable. 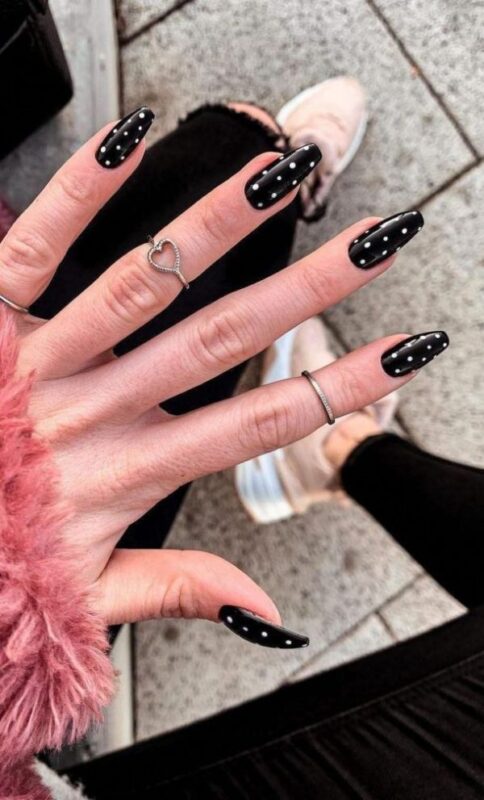 Credits to Fashionchick via Chic Pursuit

One thing’s for sure: this timeless black nail design will never go out of style! 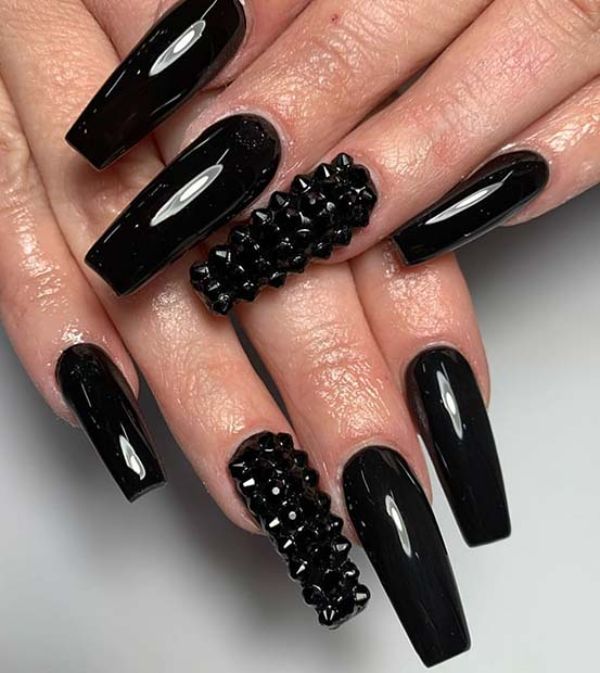 Glossy coffin nails are given a 3D effect with black studs. Simple yet impactful. 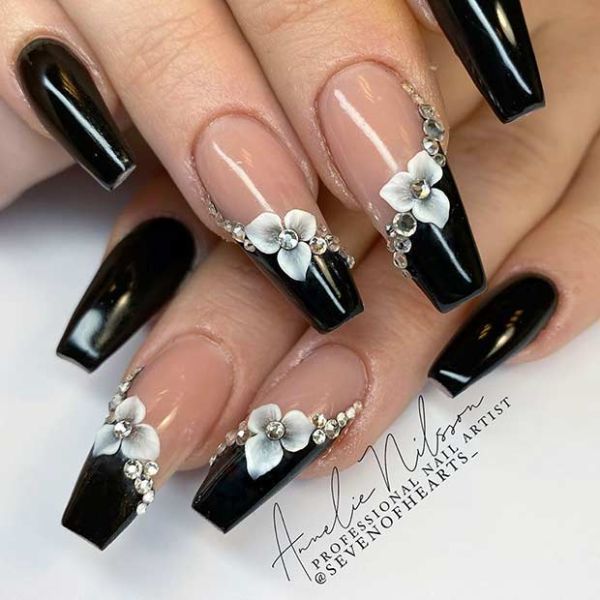 Credits to Annelie Nilsson via StayGlam

Flowers against a black-and-nude background will steal the scene in this elegant nail art. 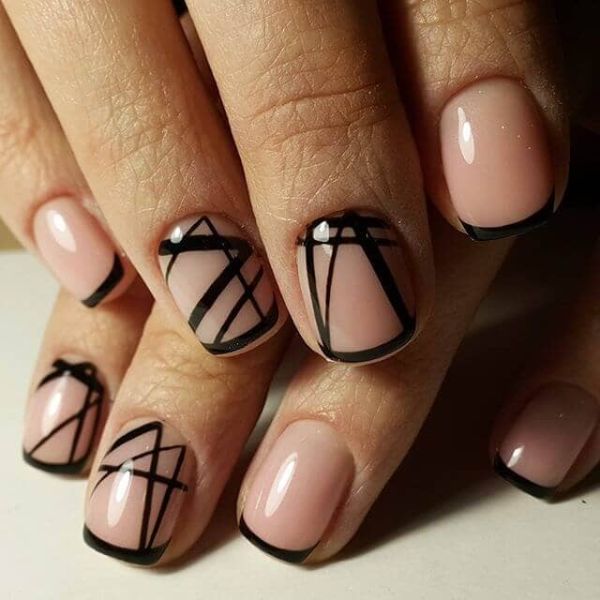 Credits to Natalimyname via The Cuddl

The black criss-crossing lines are reminiscent of the dramatic Art Deco era and are surprisingly easy to replicate at home. 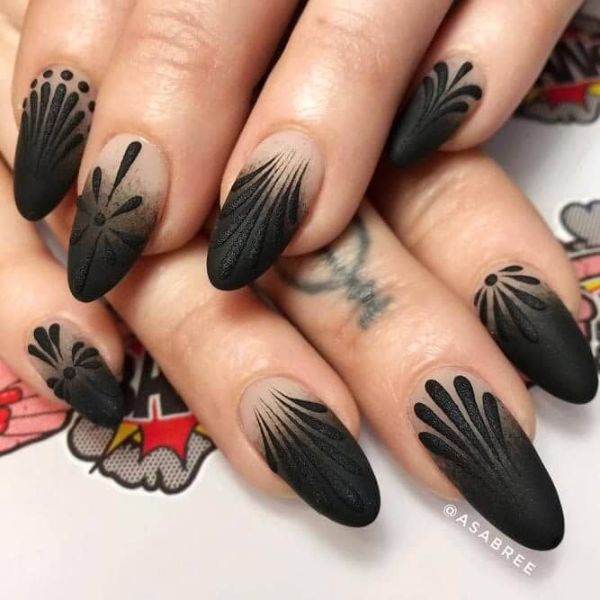 Credits to Asa Bree via The Cuddl 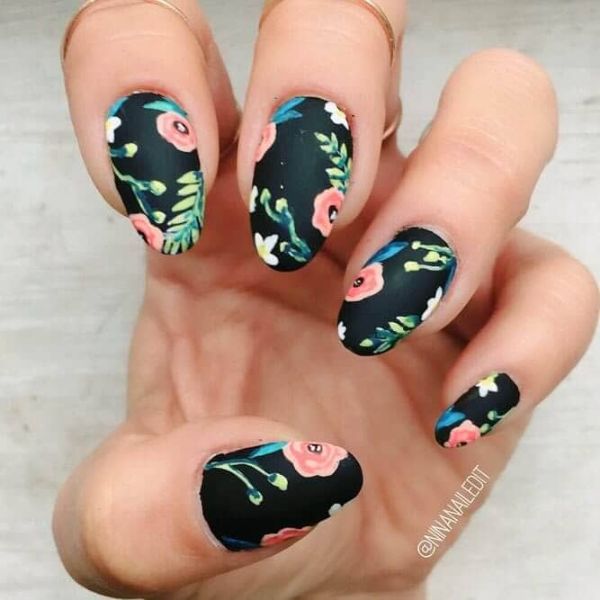 Credits to Nina Park via The Cuddl

Give your oval nails a touch of spring with bright, tropical flowers and green leaves. 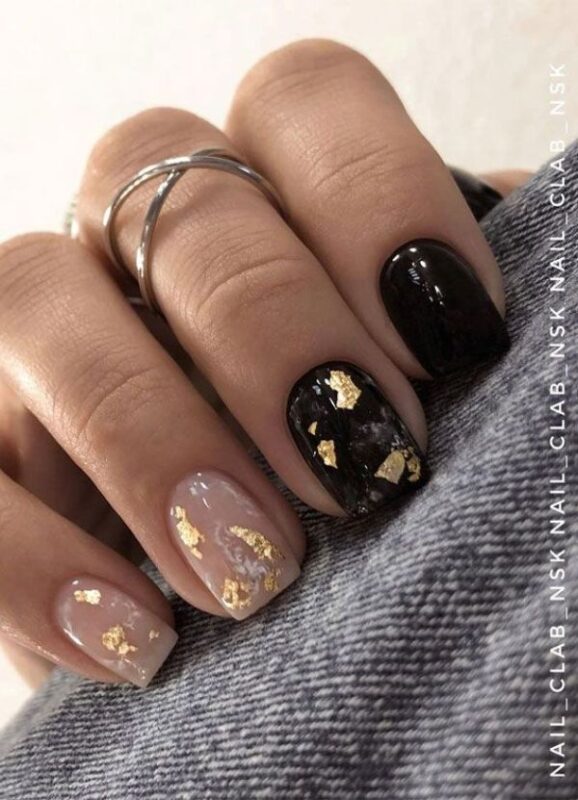 Credits to Nail_Clab_Nsk via Chic Pursuit

Bits of gold foil make this modest black nail idea pop – even if you wear them short.

Credits to Best Art Nails via The Cuddl

This eye-catching monochromatic design is accented with diamond patterns in black, grey, and white. 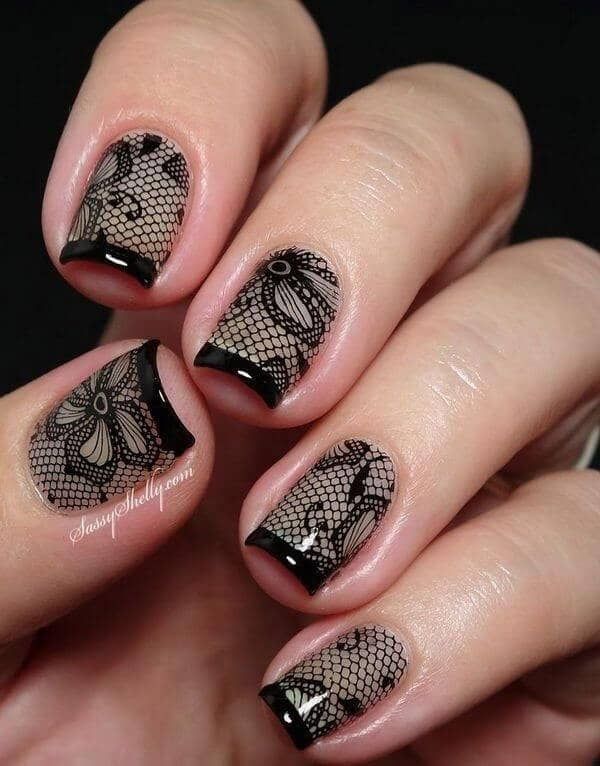 Credits to SassyShelly via The Cuddl

Give lace a modern twist in this updated rendition that suits any occasion. 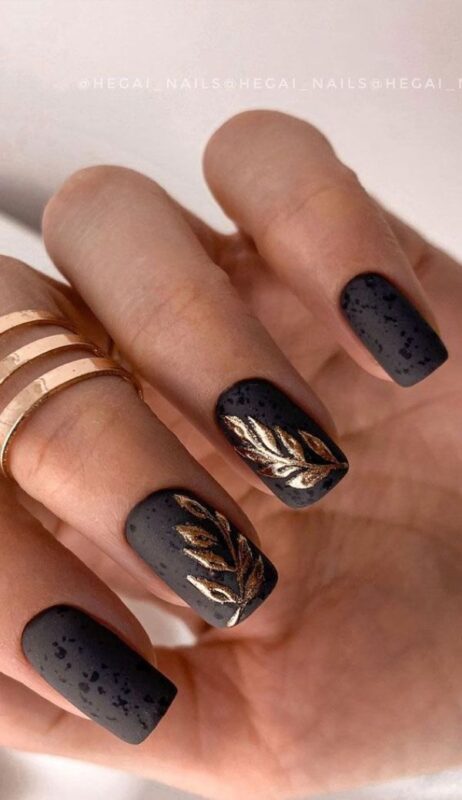 Credits to Hegai_Nails via Chic Pursuit

Bring out your inner goddess in this speckled black matte nail art with gold leaves. 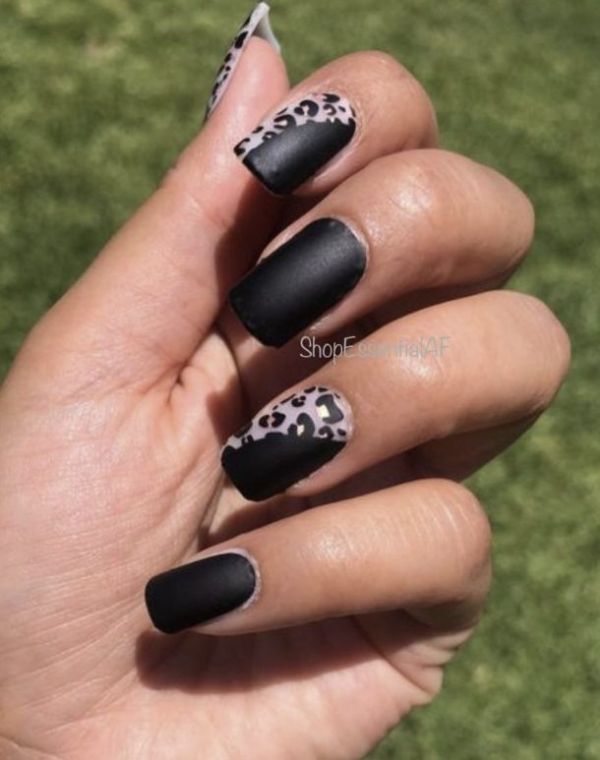 Credits to ShopEssentialAF via Chic Pursuit

Animal prints are always in vogue, and pair nicely with plain black hues for a classy look. 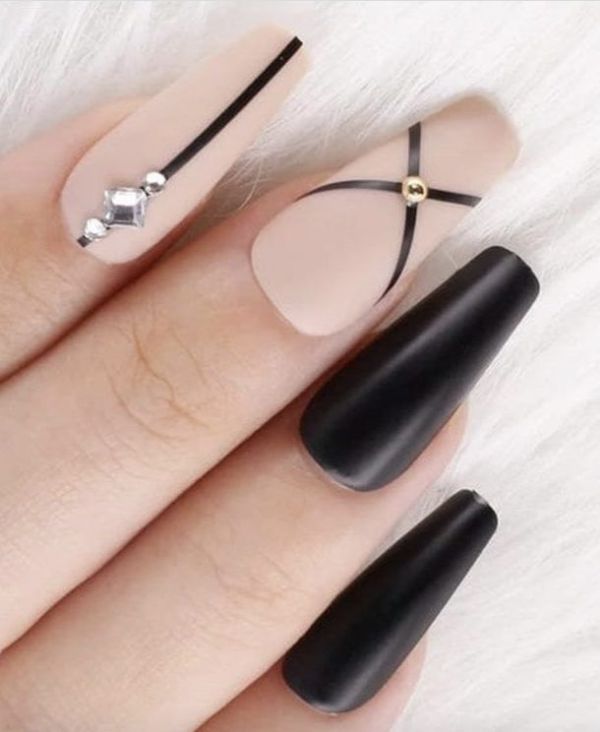 Credits to NailiciousStudio via Chic Pursuit 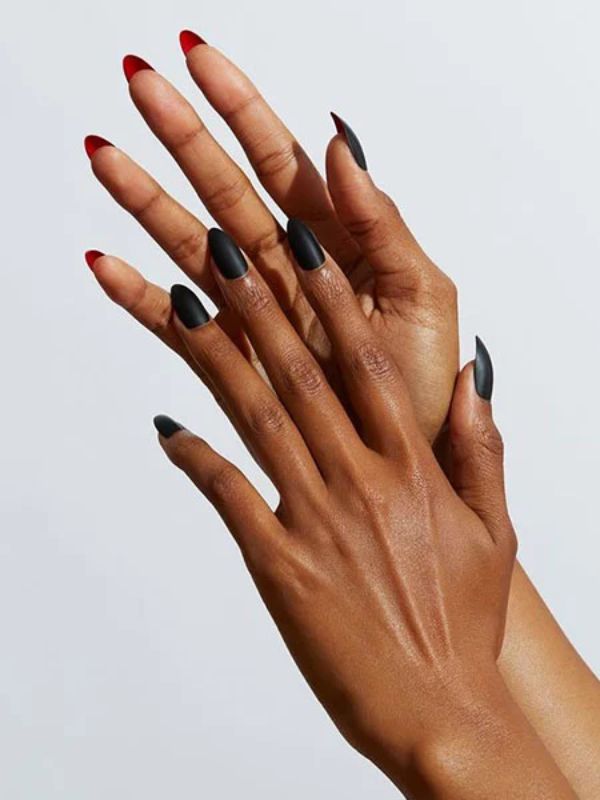 Credits to Static Nails via The Trend Spotter

Wear Christian Louboutin on your digits with pop-on nails that are as fashionable as they are beautiful. 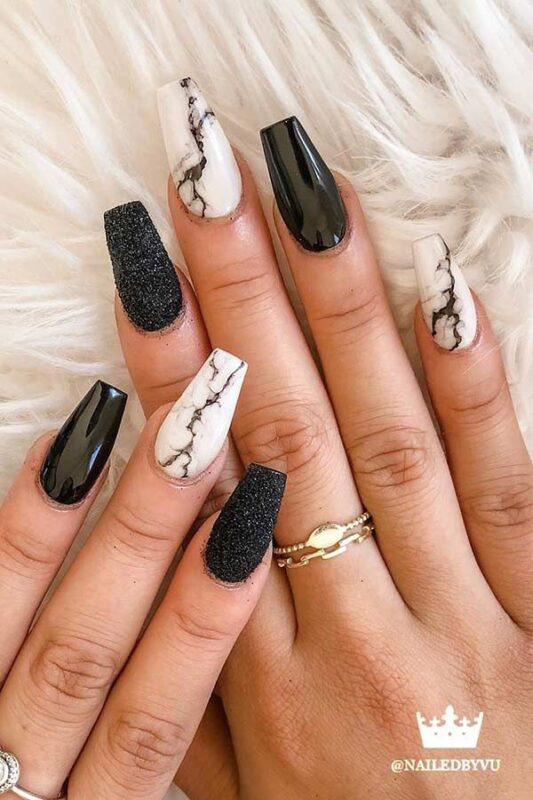 Credits to Vu Huynh via StayGlam

This concept presents 3 designs: marble, glitter, and glossy. It’s great for either long or short nails. 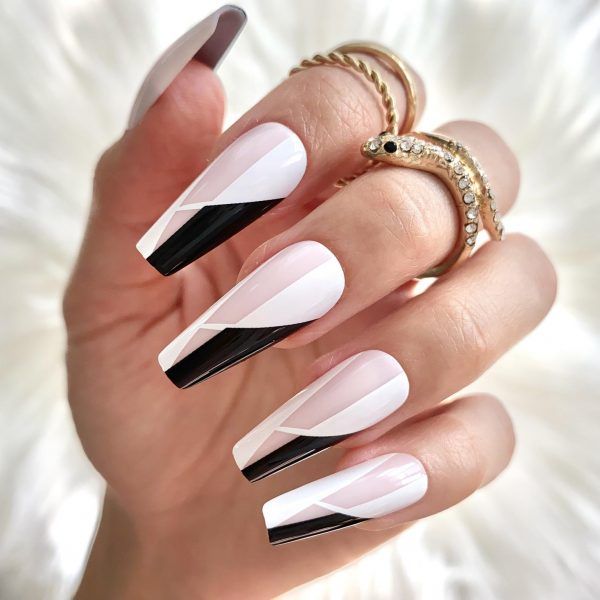 Credits to RedLeopardNails via Chic Pursuit

Pink, white, and black nails never looked so good, and so fresh! 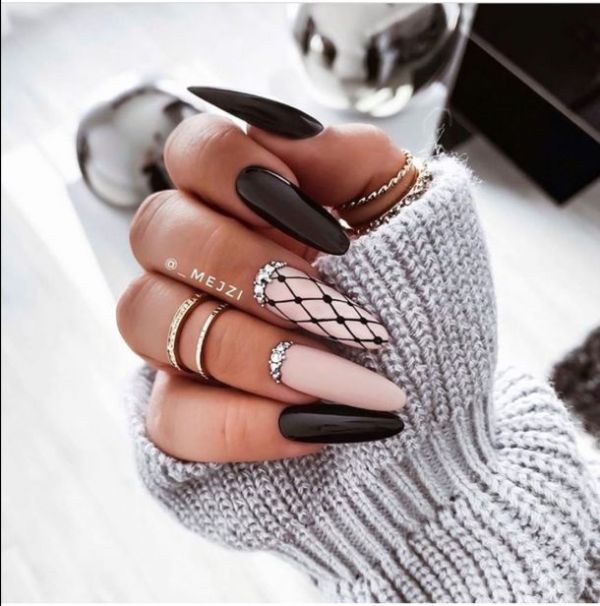 The net pattern on soft pink is a sexy surprise that’s subtle yet highly wearable. 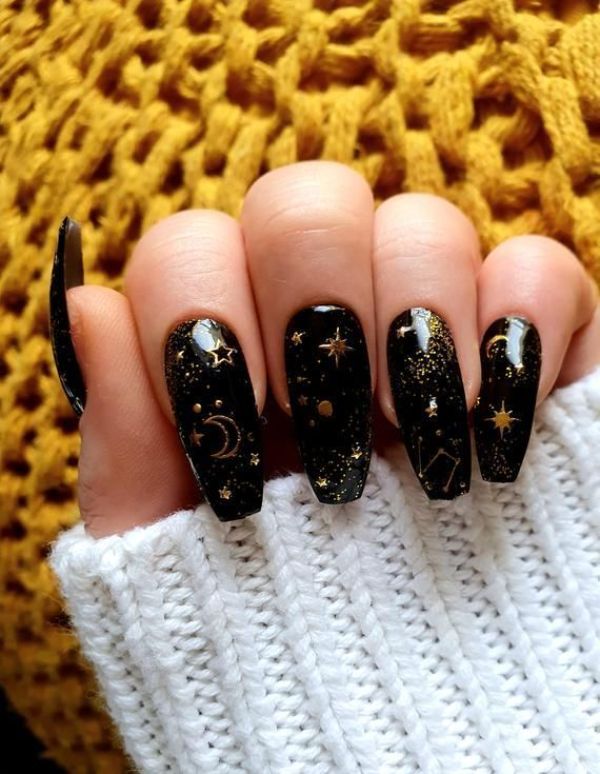 Credits to CBNails via Chic Pursuit

Inspired by astrology, this black nail design will accompany you as you gaze at the stars. 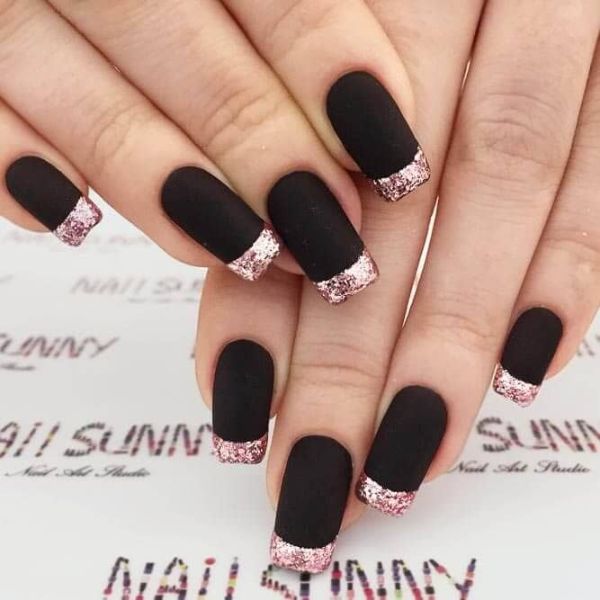 Credits to Nail_Sunny via The Cuddl

Switch up your usual white French manicure with black and pink glitter tips. 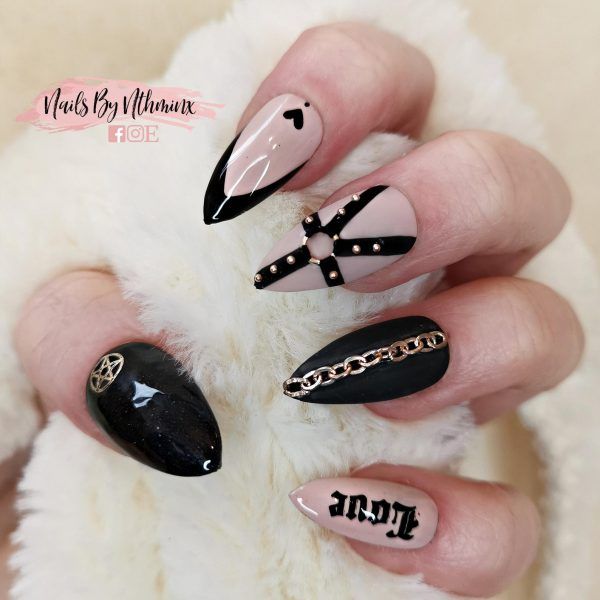 Credits to NailsByNthminx via Chic Pursuit

Don’t let anything hold you back – unless it’s these racy chains and prints. 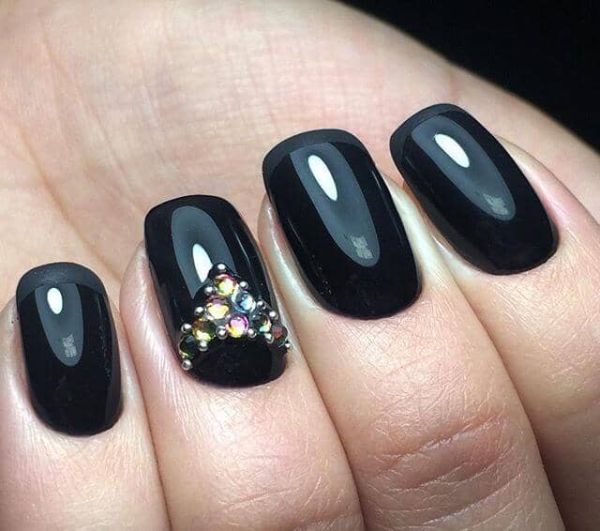 Credits to azali_nail_spb via The Cuddl

Showcase ‘less is more’ by putting pretty rhinestones on just one nail. Get this trendy design with snake print nail sticker then finish it off with matte or glossy polish. 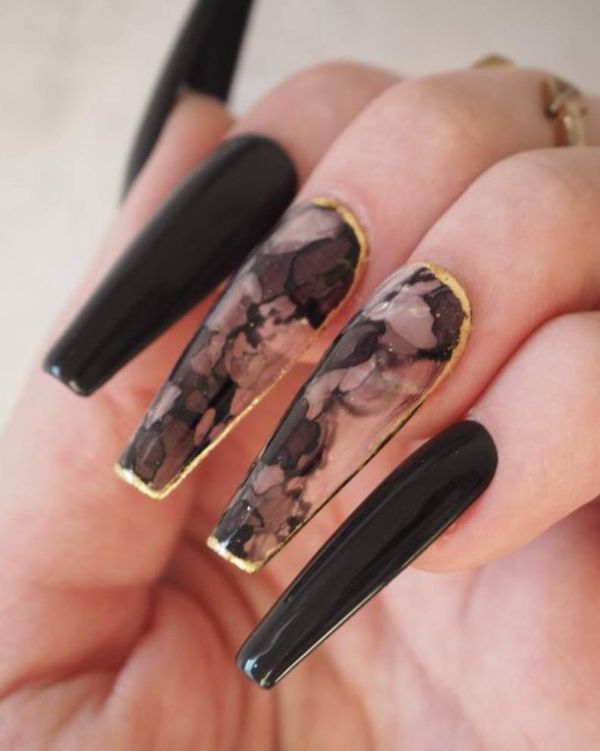 Credits to Etsy via Chic Pursuit

This is not your simple black nail – its translucence will bring luxury and style to any wardrobe.