On these platforms, he portrays a childlike, vibrant, and curious persona (known as Blippi). Blippi is mostly seen donning blue and orange beanie cap, as well as blue shirt, bow tie, and orange suspenders. 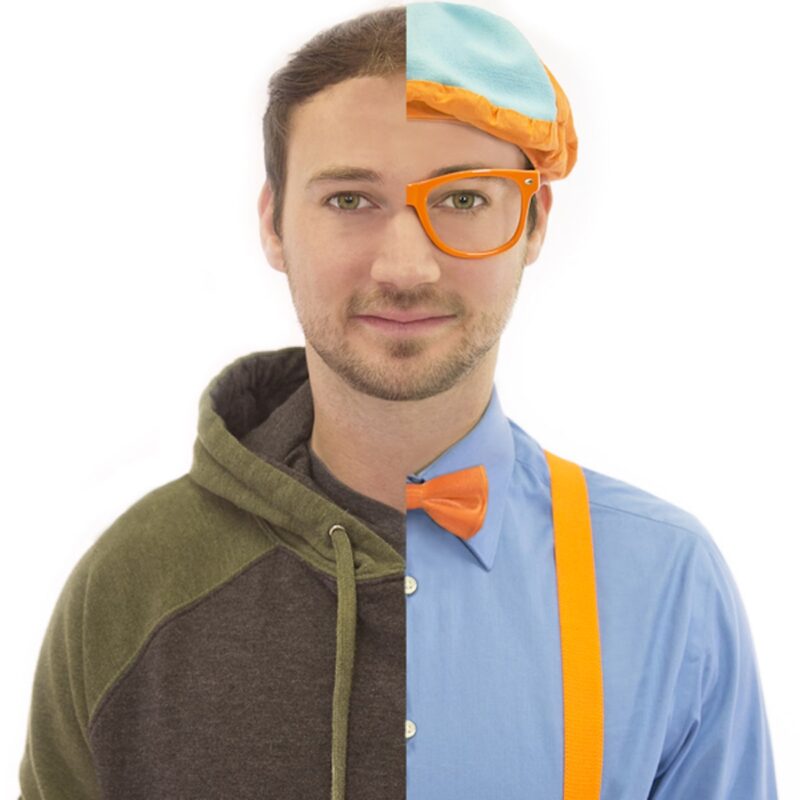 Stevin John was born on May 27, 1988, in Ellensburg, Washington. John has claimed that growing up, he dreamed of becoming a fighter pilot and limousine driver.

Stevin is a military veteran. Before venturing into YouTube, John served in the US Air Force as a loadmaster for the Boeing C – 17 Globemaster III airplane at the 4th Airlift Squadron. His core responsibility in the military was to plan and calculate cargo placement in the aircraft to keep it within the required center of gravity limits for a successful flight.

John conceptualized the idea of Blippi after moving back to his hometown in Ellensburg and watching his then-2-year-old nephew viewing low-quality YouTube videos. He created the character as an adult man who dons brightly-colored clothes and goes dancing in deserted soft play centers across the US for the benefit of YouTube.

On January 27, 2014, John published his first Blippi video. Not only did he star in the video, but he was also its only editor and producer. The video was generally well-received and Blippi followed up later with more videos.

To ensure that his videos reach a wider audience without losing their core message, Blippi decided to blend the elements of entertainment and education. He creatively started to portray Blippi as an educational character but one who still had the mindset of a child. It was not long before Blippi’s videos caught on. As of the time of writing, the Blippi YouTube channel has garnered over 10 million subscribers and 7 billion views.

Blippi occasionally releases videos in Spanish to cater to a wider audience. He has also launched numerous pieces of merchandise to go with his videos, including Blippi Toys as well as DVD and digital downloads.

As of July 1, 2021, Blippi had a net worth of $20 million. He has earned the vast majority of his wealth from his YouTube channel.

The Blippi channel currently boasts more than 10 million subscribers and 8 billion views. The channel can generate approximately 11 million views per day across different countries. According to YouTube commissions on monetized videos, that should work out as around $55,000 in daily revenue, or $20 million per year.

Blippi’s second channel, known as Blippi Toys, has more than 6.5 million subscribers and over 5.5 billion views. The channel generates an average of 4 million views daily, which translates to daily earnings of $20,000 or $7.3 million per year.

For reference, YouTube pays between $2 and $7 for every 1,000 views of a monetized video. Generally, monetized videos range from 40% to 80% of the total views. The range depends on various factors, including the ad inventory, the number of ads in the video, ad engagement, content type, the device the video is played on, and the viewer’s location.

In addition to his YouTube channels, Blippi’s income also comes from Amazon Video. Plus, he also sells his merchandise on the platform.

1. Find your niche and get good at it

Blippi is one of the few YouTubers who target their content entirely to a children audience. It’s a niche that he found after a short stint making gross-out videos, and he has generally excelled in it.

2. Know when something isn’t working anymore

Blippi was wise enough to know when his gross-out videos were no longer achieving their intended purpose. That’s when he started creating children’s entertainment and educational content.

3. Apologize for your mistakes

In 2013, Blippi unearthed a video where he performed the Harlem shake dance on a toilet and ended up defecating on a naked friend. When the video was leaked in 2019, the YouTuber was sincerely remorseful for his conduct back then. He said, “At the time, I thought this sort of thing was funny, but really it was stupid and tasteless, and I regret having ever done it.”

“Blippi to me is a heightened energy, a different version of me, but as a child.”

“I believe that children are super smart and they have good intuition.”

“I wanted to be a fighter pilot, but I soon started to realize the military wasn’t for me.”

“It seems like the kids really enjoy me but the parents do too because they can keep their kids entertained with Blippi and they know it’s safe content that’s educational.”

“Whenever I am thinking about what videos I should make, what Blippi should do, I think about what I would have wanted to do when I was a child.”

Blippi ranks among the wealthiest and most creative YouTubers alive. He has amassed his $20 million net worth creating children-focused entertaining and educational YouTube videos.