Every 12th of February is Darwin Day. It is a worldwide celebration of science held on the birth anniversary of Charles Darwin in 1809. Best known for his work as a naturalist, Darwin developed the theory of evolution to explain biological changes.

Charles Robert Darwin was born in Shrewsbury, England. He was the second youngest of six children. Darwin and his siblings were kids of wealth and privilege. On his paternal side, Darwin came from a long line of scientists. Dr. R.W Darwin, his father, was a medical professional. Dr. Erasmus Darwin, his grandfather, was a distinguished botanist. His mother, Susana, passed away when he was eight years old.

In 1825, at age 16, Darwin got accepted at Edinburgh University, along with his brother Erasmus. A couple of years after, he enrolled at Christ’s College in Cambridge. His father wanted him to be a medical doctor, too. However, the mere sight of blood made Darwin queasy. His father then advised him to be a parson. But Darwin was more inclined to delve into natural history.

In 1831, Charles Darwin started a five-year survey voyage across the globe on the HMS Beagle. His extensive studies and research on specimens guided him to develop his theories. After years and years of research, Darwin published On the Origin of Species in 1859. From then on, he was regarded as one of the best naturalists and biologists to ever live.

Darwin died on April 19, 1882, due to heart failure. He was buried in Westminster Abbey, near the burial site of fellow scientists, Isaac Newton and John Herschel.

Charles Darwin and Abraham Lincoln shared the same birthday. The English botanist and the American president were born on the 12th of February, 1809. It was the same day, but in entirely different settings.

The renowned naturalist was born in his family’s massive Georgian mansion in Shrewsbury. America’s 16th president, on the other hand, came into the world in a rustic cottage in the wilderness of Kentucky.

Darwin patiently waited for over two decades to publish his revolutionary work. His voyage across the world, which concluded in 1836, presented him with indispensable exploration that led to the progression of his theory of evolution and natural selection.

He dragged on the publication due to worry that the spiritual people and the general public won’t be able to acknowledge his radical work. He held on to his theory of evolution until 1858. At that time, he made a statement with another naturalist, Alfred Russel Wallace, who planned to tell the world about a concept same as his.

Darwin made a list of the pros and cons of getting married. He exhibited a logical disposition even in the romantic aspect of his life. In 1838, Darwin made a list with two columns (Marry and Not Marry) on the merits and drawbacks of marital life.

In the pros column, he cited: children, constant companion until they’re old, and someone to look after the house. In the cons column, he listed: liberty to go anywhere, loss of time, and conversation with smart men at clubs. Eventually, the Marry column prevailed. Just a year after making a list, Darwin married Emma Wedgwood, his first cousin.

Darwin was once a divinity scholar. After leaving the University of Edinburgh, he went to Cambridge to take up theology. But his faith wavered when he encountered the harsh truths of slavery during his voyage. It continued to decline when three of his children died. Even so, Darwin in no way described himself as an atheist. Instead, he called himself an agnostic.

Charles Darwin had a taste for exotic animals. He didn’t just research about varieties from different parts of the world – he dined on them, too. When he was in Cambridge, he founded the Gourmet Club a.k.a. the Glutton Club. The group aimed to dine on the “birds and beasts, which were before unknown to the human palate.” To name a few, Darwin had eaten hawk, bittern, armadillo, puma, and ostrich meat.

Darwin was supposed to be buried in the village where he spent the last four decades of his life. After his demise, his family began to prepare for his burial in town. But his friends and colleagues lobbied to have him buried at Westminster Abbey.

Following several publications and the general public joining the campaign, the Dean of Westminster authorized the plan. Darwin was laid to rest in England’s most revered church. 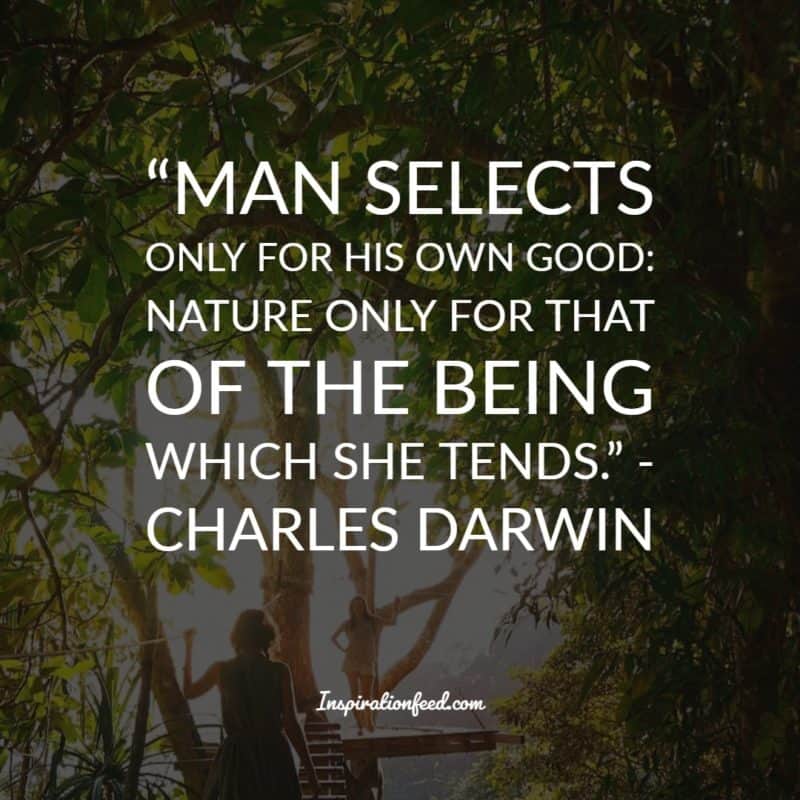 “Man selects only for his own good: Nature only for that of the being which she tends.” – Charles Darwin

“Freedom of thought is best promoted by the gradual illumination of men’s minds which follows from the advance of science.” – Charles Darwin

“Great is the power of steady misrepresentation.” – Charles Darwin

“In the long history of humankind (and animal kind, too) those who learned to collaborate and improvise most effectively have prevailed.” – Charles Darwin

“It is not the strongest of the species that survives, not the most intelligent…It is the one that is the most adaptable to change.” – Charles Darwin

“We must, however, acknowledge, as it seems to me, that man with all his noble qualities… still bears in his bodily frame the indelible stamp of his lowly origin.” – Charles Darwin

“Intelligence is based on how efficient a species became at doing the things they need to survive.” – Charles Darwin

“Blushing is the most peculiar and most human of all expressions.” – Charles Darwin

“The mystery of the beginning of all things is insoluble by us; and I for one must be content to remain an agnostic.” – Charles Darwin

“We stopped looking for monsters under our bed when we realized that they were inside us.” – Charles Darwin

“I am not apt to follow blindly the lead of other men.” – Charles Darwin

“The love for all living creatures is the most noble attribute of man.” – Charles Darwin

“If the misery of the poor be caused not by the laws of nature, but by our institutions, great is our sin.” – Charles Darwin

“If I had my life to live over again, I would have made a rule to read some poetry and listen to some music at least once every week.” – Charles Darwin

“A man who dares to waste one hour of time has not discovered the value of life.” – Charles Darwin

“…Let each man hope and believe what he can.” – Charles Darwin

“One general law, leading to the advancement of all organic beings, namely, multiply, vary, let the strongest live and the weakest die.” – Charles Darwin

“…but if we were intentionally to neglect the weak and helpless, it could only be for a contingent benefit, with a certain and great present evil.” – Charles Darwin

“…for the shield may be as important for victory, as the sword or spear.” – Charles Darwin

“It is always advisable to perceive clearly our ignorance.” – Charles Darwin

“There is no fundamental difference between man and animals in their ability to feel pleasure and pain, happiness, and misery.” – Charles Darwin

“False facts are highly injurious to the progress of science, for they often endure long…” – Charles Darwin

“Man in his arrogance thinks himself a great work, worthy of the interposition of a deity. More humble, and I believe truer, to consider him created from animals.” – Charles Darwin

“We are not here concerned with hopes or fears, only with truth as far as our reason permits us to discover it.” – Charles Darwin

“A scientific man ought to have no wishes, no affections, – a mere heart of stone.” – Charles Darwin

“To kill an error is as good a service as, and sometimes even better than, the establishing of a new truth or fact.” – Charles Darwin

“There is grandeur in this view of life, with its several powers, having been originally breathed by the Creator into a few forms or into one…” – Charles Darwin

“But then with me the horrid doubt always arises whether the convictions of man’s mind, which has been developed from the mind of the lower animals, are of any value or at all trustworthy.” – Charles Darwin

“We will now discuss in a little more detail the Struggle for Existence.” – Charles Darwin

“The very essence of instinct is that it’s followed independently of reason.” – Charles Darwin

“I am not the least afraid to die.” – Charles Darwin

“We are always slow in admitting any great change of which we do not see the intermediate steps.” – Charles Darwin

“In conclusion, it appears that nothing can be more improving to a young naturalist, than a journey in distant countries.” – Charles Darwin

“Wherever the European had trod, death seemed to pursue the aboriginal.” – Charles Darwin

“A fair result can be obtained only by fully stating and balancing the facts and arguments on both sides of each question.” – Charles Darwin