Who Is Chelsea Peretti?

As a screenwriter, Peretti is most noted for writing for ‘Saturday Night Live’ ‘Parks and Recreation,’ among other television projects.

Chelsea Vanessa Peretti was born on February 20, 1978, in Oakland, California, United States, to Anthony Peretti and Amanda Cherkin Peretti. Her father was a criminal defense lawyer and painter, whereas her mother was a schoolteacher.

Chelsea has two brothers and one sister. Her older brother, Jonah Peretti, is best known for being a co-founder of The Huffington Post and BuzzFeed.

Peretti attended The College Preparatory School based on Oakland, before relocating to New York City in 1996 and subsequently attending Barnard College. During her junior year at Barnard College, Peretti took a study year abroad to Royal Holloway – University of London

After completing her college education, Chelsea Peretti moved to Los Angeles, California. Peretti made her television debut in a 2004 episode of Comedy Lab.

In 2006, Peretti portrayed Shonda in an episode of the series Cheap Seats. The following year, she landed a role in the film Twisted Fortune.

In 2008, Chelsea Peretti joined the cast of the television series The Smoking Gun Presents: World’s Dumbest. She left the series in 2013, having appeared in a total of 88 episodes. During the same period, Peretti wrote the screenplay for various series and television movies, including Bobby Bottleservice (2009), The Sarah Silverman Program (2010), and WTF with Marc Maron (2010). She also landed an acting role in the series Louie (2010).

Peretti was cast in the 2011 movie, Guy Talk. The same year, she appeared in as well as wrote the screenplay for the television show Comedy Central Presents.

In 2012, Peretti appeared in two episodes of The Couple and one episode of Hell’s Kitchen. She subsequently appeared in ‘The Greatest Event in Television History’ and ‘High School USA!’

Chelsea Peretti wrote the screenplay for two episodes of Saturday Night Live in 2013. The same year, Peretti began portraying Gina Linetti in the series Brooklyn Nine-Nine, in what would become her most iconic television role to date. She maintained her role in the series until 2021, making a total of 108 appearances.

The following are other noteworthy television series and movies that Chelsea Peretti has contributed to over the years;

Related  Will Ferrell’s Net Worth (Updated 2022)

Chelsea Peretti has enjoyed a stellar writing career over the years, Peretti has written for numerous reputable outlets, including The Village Voice, Playgirl, Details, and American Theatre Magazine.

She has also been a notable contributor to various online publications, such as The Huffington Post.

In the music industry, Peretti is most noted for her extended play (EP) titled Foam and Flotsam, which was released on April 21, 2020. She collaborated with numerous artists on most of the songs in the EP. 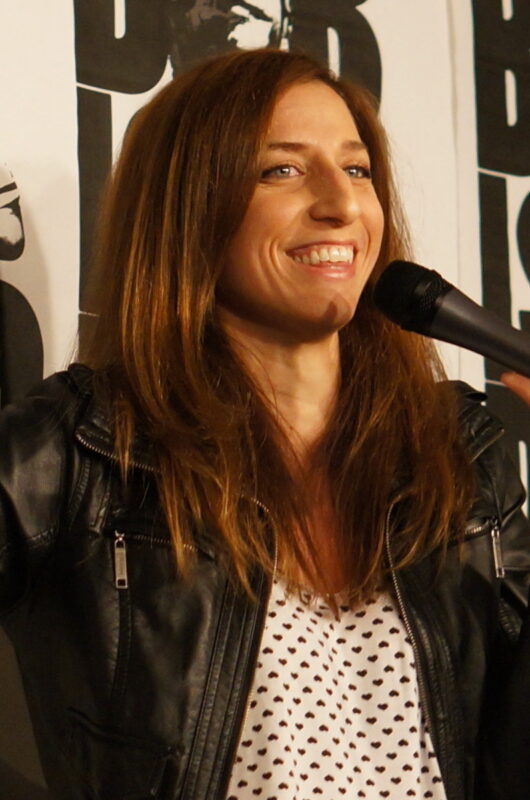 As of January 1, 2022, Chelsea Peretti had a net worth of $20 million. That’s her combined net worth with her comedian and filmmaker husband Jordan Peele.

In fact, Peele seems to have brought more money into the marriage than Peretti. The filmmaker is remembered for signing a lucrative deal with Universal Pictures in 2019, estimated to be between $300 and 400 million.

Chelsea Peretti is probably best known as an actress and comedian. However, Peretti actively pursues multiple other ventures, including screenwriting, singing, and writing.

It doesn’t matter how fast you get to the top. What counts is how long you stay there. One reason Peretti has remained on her fans’ lips is that she has consistently made film and television appearances since she burst onto the scene in 2004.

Even after earning herself a spot among Hollywood’s most valuable actresses, Chelsea Peretti didn’t sit back and wallow in the glory of her achievements. Peretti has continually endeavored to challenge herself by pursuing ventures outside her main occupation, such as singing.

• I feel like women are frequently seen as guests in the comedy world.
• I would say that I have a love-hate relationship with almost everything in my life, including stand-up.
• If you text ‘I love you’ and the person writes back an emoji – no matter what that emoji is, they don’t love you back.
• On tour, it’s either call ex-boyfriends or tweet a lot. You’re just looking for any proof that you’re not completely alone.
• Sometimes when I’m nervous, thats when the most interesting things happen.

Chelsea Peretti is an accomplished actress and comedian most noted for her role in the series Brooklyn Nine-Nine.

Peretti has appeared in numerous other films and television shows. She has also enjoyed a successful career as a screenwriter and author. Her current net worth stands at $20 million.