Let’s be honest, when you have a few friends over and alcohol is involved, any game at all can be made into a drinking game. We have all been there at least once, playing “drunk tic tac toe” or “drunk hide and seek”. However, little did we know back then that in the future, board games made specifically for getting people drunk would become a hugely popular thing.

In today’s market, you can buy hundreds of card games and board games with new and improved rules that cater specifically for parties and gatherings with alcohol involved! These games are perfect in a host of scenarios like family nights in (adult family that is), get-togethers with friends or house parties/college parties. Even doing the research for this article myself, I found myself adding more and more games that I had never heard of before into my Amazon watchlist.

Of course, alcohol is not compulsory in any of these games, and you can substitute alcohol for juice or soda as you wish. Also be sure to drink responsibly and if needed, have a designated driver. With that being said, this article looks to give you a simple top 10 list (in no particular order) of the best drinking board games that will make any night in, any gathering or any party one to remember! 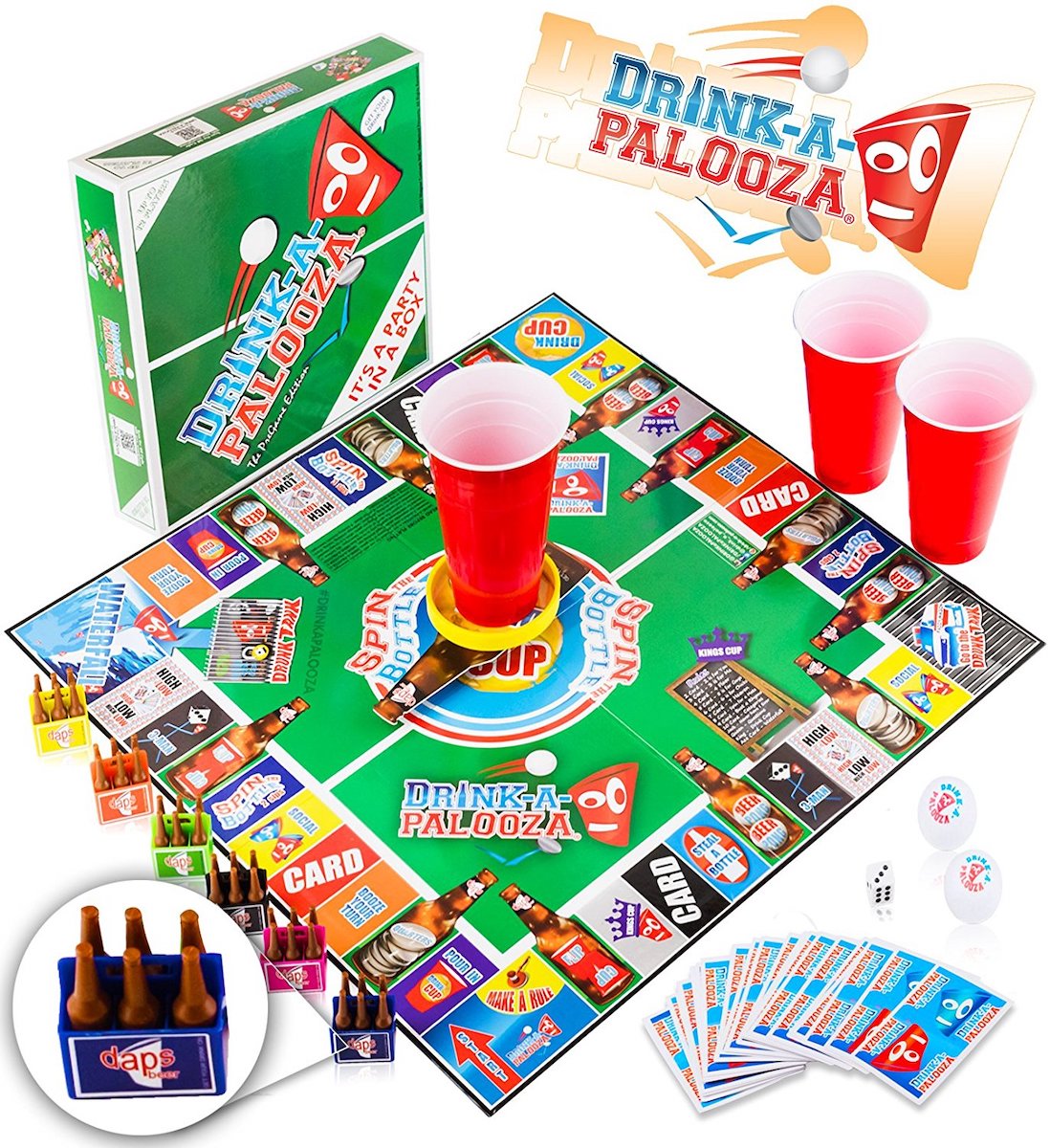 If you are looking for a drinking game that has pretty much everything you need, then this is the one for you. Combining a variety of the most popular drinking games into one behemoth of a board game, Drink-a-palooza is designed to get you and your friends drunk as quick as possible. It is laid out like monopoly, with a spot in the middle that holds the “community cup”, this is a cup you do NOT want to have to drink from.

What I love about this game is the variety of challenges you have to undertake in order to win. The aim of the game is to collect 6 mini bottles. You collect them by landing on bottle spaces and successfully completing a task associated with that space. The task could be completing a game like beer pong or flip cup (so I hope you’ve been practicing), or simply taking a shot.

If you do not land on a mini bottle space however, you can still benefit from the drinking activities or dares associated with landing on the other spots. Regardless of where you land or how many bottles you collect, this game will get everyone to have fun, or at least get them drunk!! 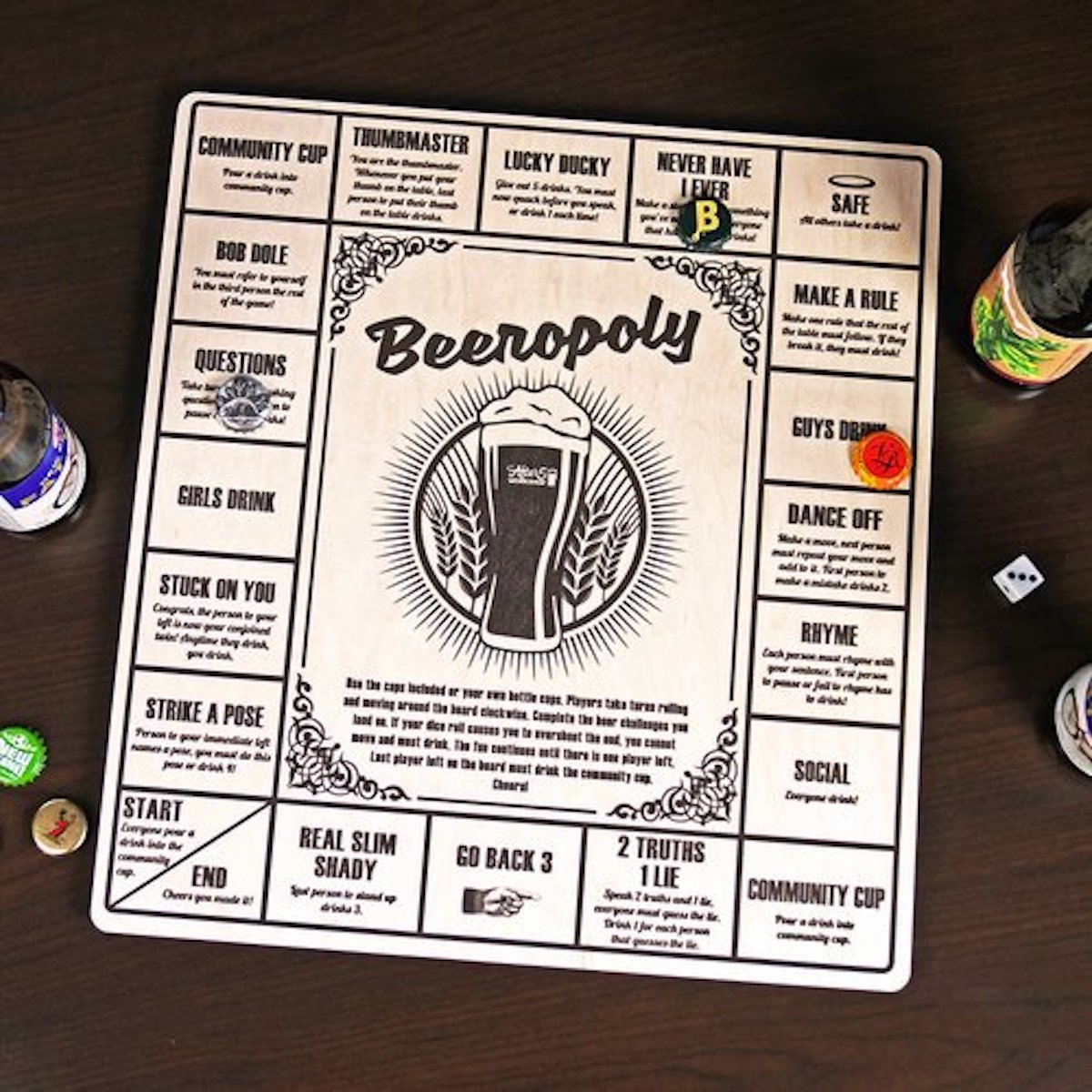 This drinking board game is so easy to follow and so much fun to play. Simply roll the dice and move around the board like you would in monopoly, only instead of buying hotels and taking rent from people, you’re drinking. That is all. The spaces each give you different objectives, like “girls drink”, “dance off” or “community cup” where you have to add some of your drink into the community cup, landing on the wrong space can be pretty costly and can even mean you have to down whatever is inside the cup.

Depending on what people are drinking, that can get pretty disgusting, trust me. The pieces are bottlecaps which is pretty rustic and cool, and the rules are easy to understand, meaning no confusion and you can jump straight in. The game is quite expensive at about $40-45, but you will be making some hilarious memories and they are priceless.

This one kind of explains itself, doesn’t it? Drunk Jenga, or “Tipsy Tower” is a fun and creative way to play an old classic. While not a conventional board game in that you are not rolling a dice and moving around a board, each of the Jenga blocks that you remove will have a specific task written on them.

Some of the tasks include “waterfall” where everyone has to drink until the person on their right stops, girls/boys drink etc. You can also make your own commands for the game and personalize it for you and those around you to make it even more fun.

The commands can range from single player dares to group dares, so even if it is not your go, nobody is safe. Ultimately, the player who knocks the whole tower down has to finish their drink, so you will need steady hands! The beauty is, the longer you play, the less likely you are to be steady, so things can turn crazy really fast! 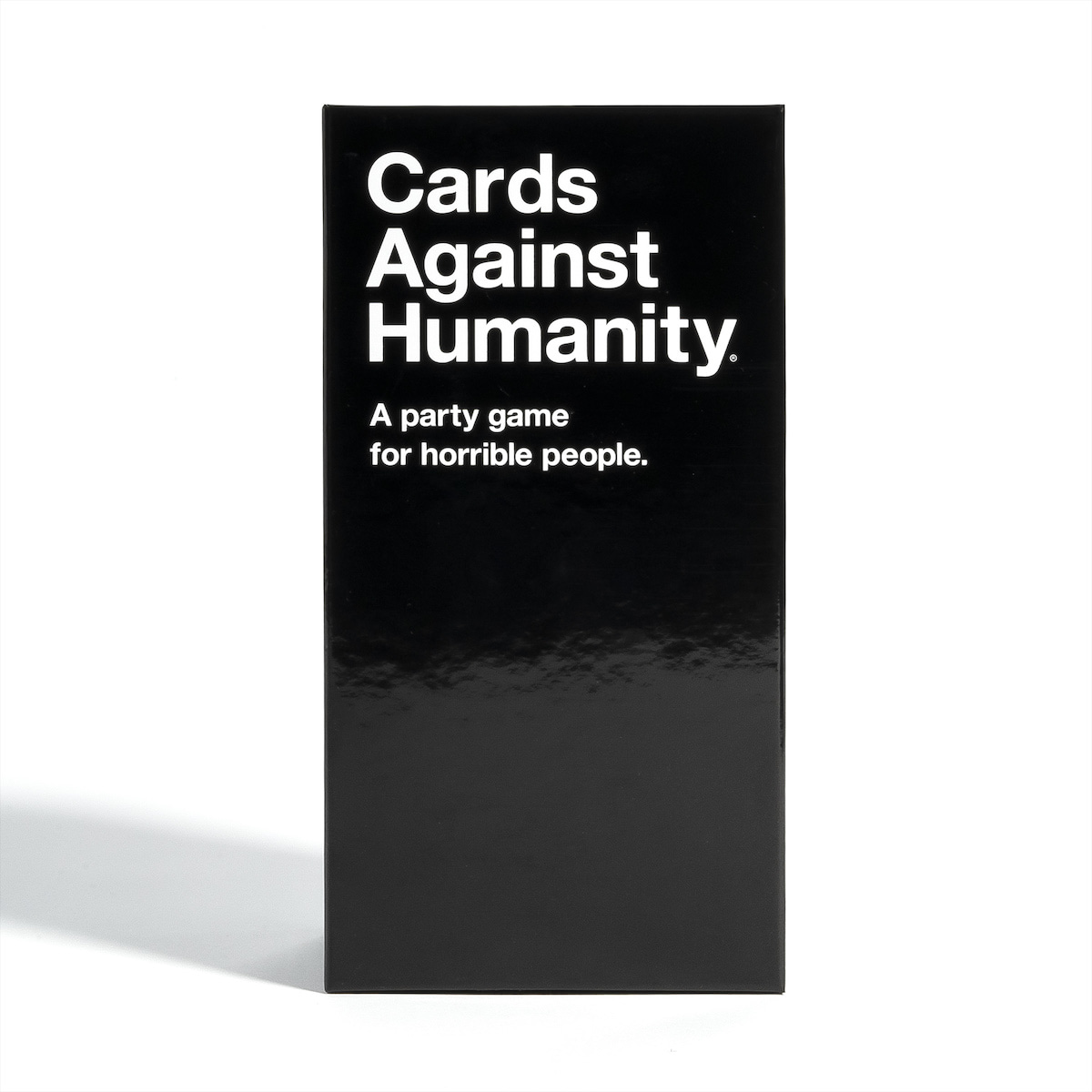 Not only is Cards Against Humanity the ultimate party game, it is also a perfect drinking game too, and offers some hilarious ways to get you and your friends drunk really fast. The aim of the game is simple, there are 80-100 black cards, these are title cards, so if it is your go, you will read it, it might be “my favorite way to de-stress after a long day is (blank).

Everyone has 10 white cards each (there are 400 in total) and has to pick the white card that they think is funniest and matches up best with the black card. The ‘card czar’ then reads the combinations out and picks a winner. There are three ways that you can turn this hilarious and politically incorrect game into a drinking game.

Related  6 Ways To Save Money On Your Wedding 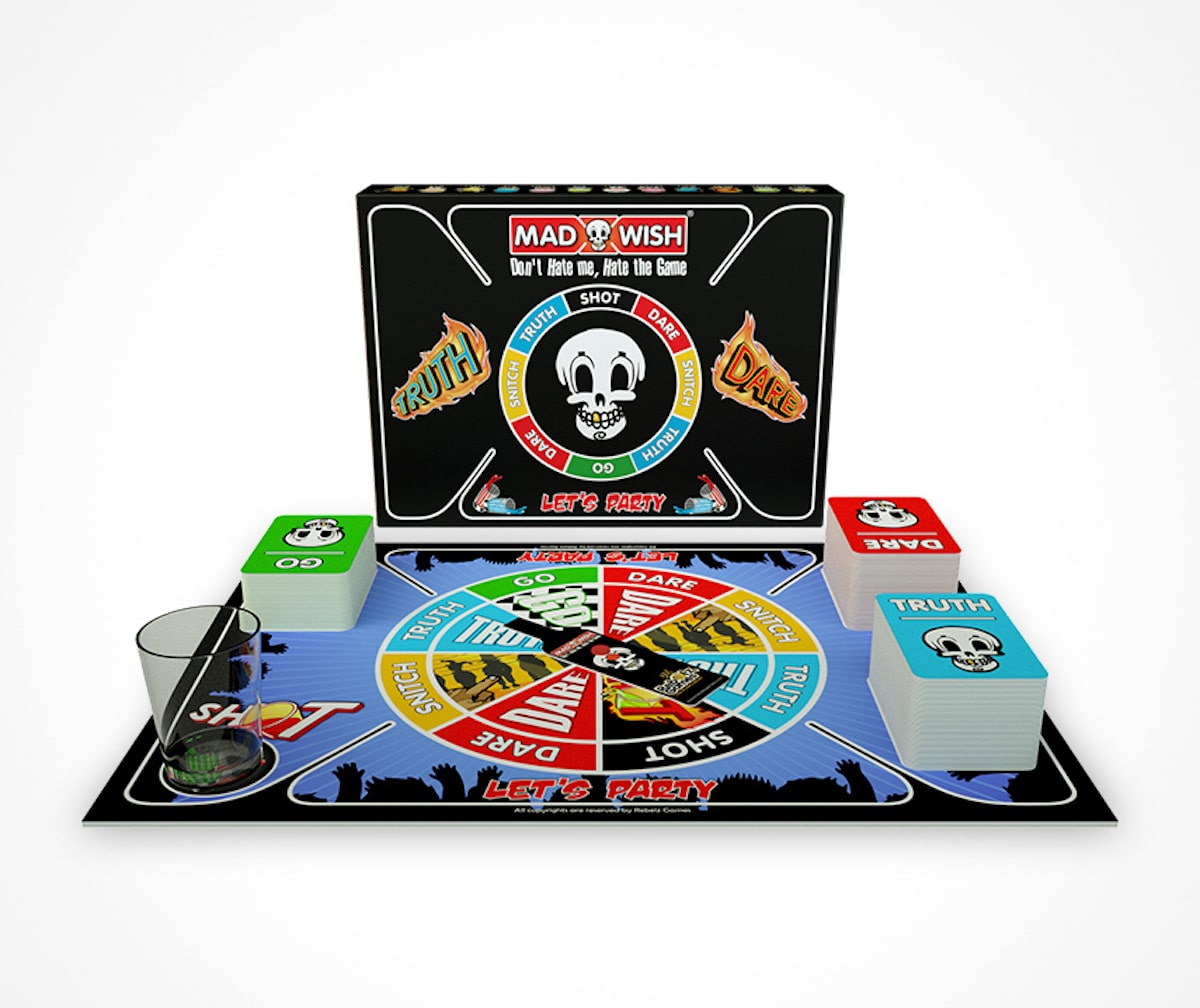 Picture truth or dare, but a lot crazier and a lot more adult oriented! The board itself is a circle and in the middle is a spinning bottle! Simply spin the bottle and do whatever the space tells you to do! If it lands on “truth” pick a card from the truth pile, if you don’t want to answer, then take a shot! It is the same with “dare”.

Other spaces will lead you to either doing something fun or getting someone else to do something fun! It has won awards for “best party game” due to its innovative twist on a basic concept and it is super well priced as well at about $20-25. Perfect if you and some friends want to pool some money together and get a quick, fun, and messy drinking board game! 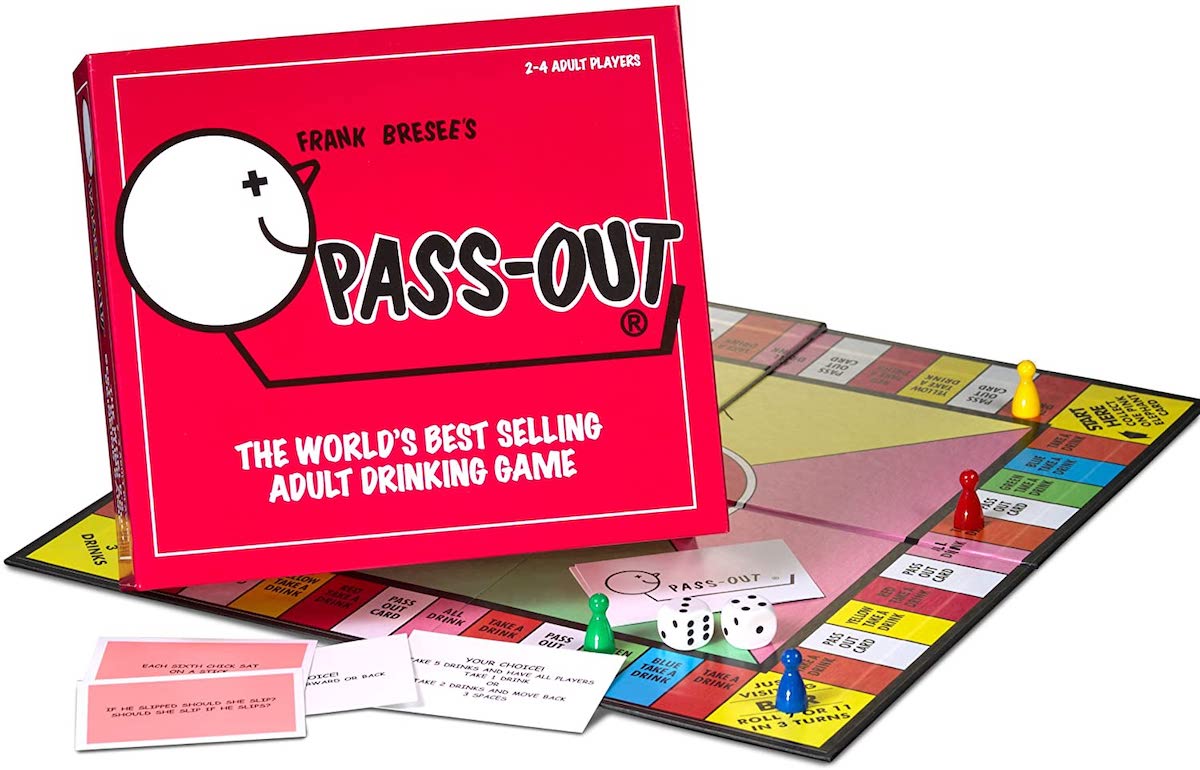 Often touted as the “best” party game available, Pass Out is one of the most fun and easy to play games on the list. It is similar to monopoly, but there is alcohol involved (of course) and there are a few other fun rules attached too! Each square has a different color, and there are 4 sections, each represented by a color, this means that if you land on a green square that says “take a drink” then the players with pieces in the green section have to take a drink!

However, you can just lower it to 5 pink elephants and spare everyone the pain of having to recite drunken tongue twisters, but where is the fun in that!! The one downside to this game is its price, it can come in at about $50, so perhaps a few of your friends can help to spread the cost. 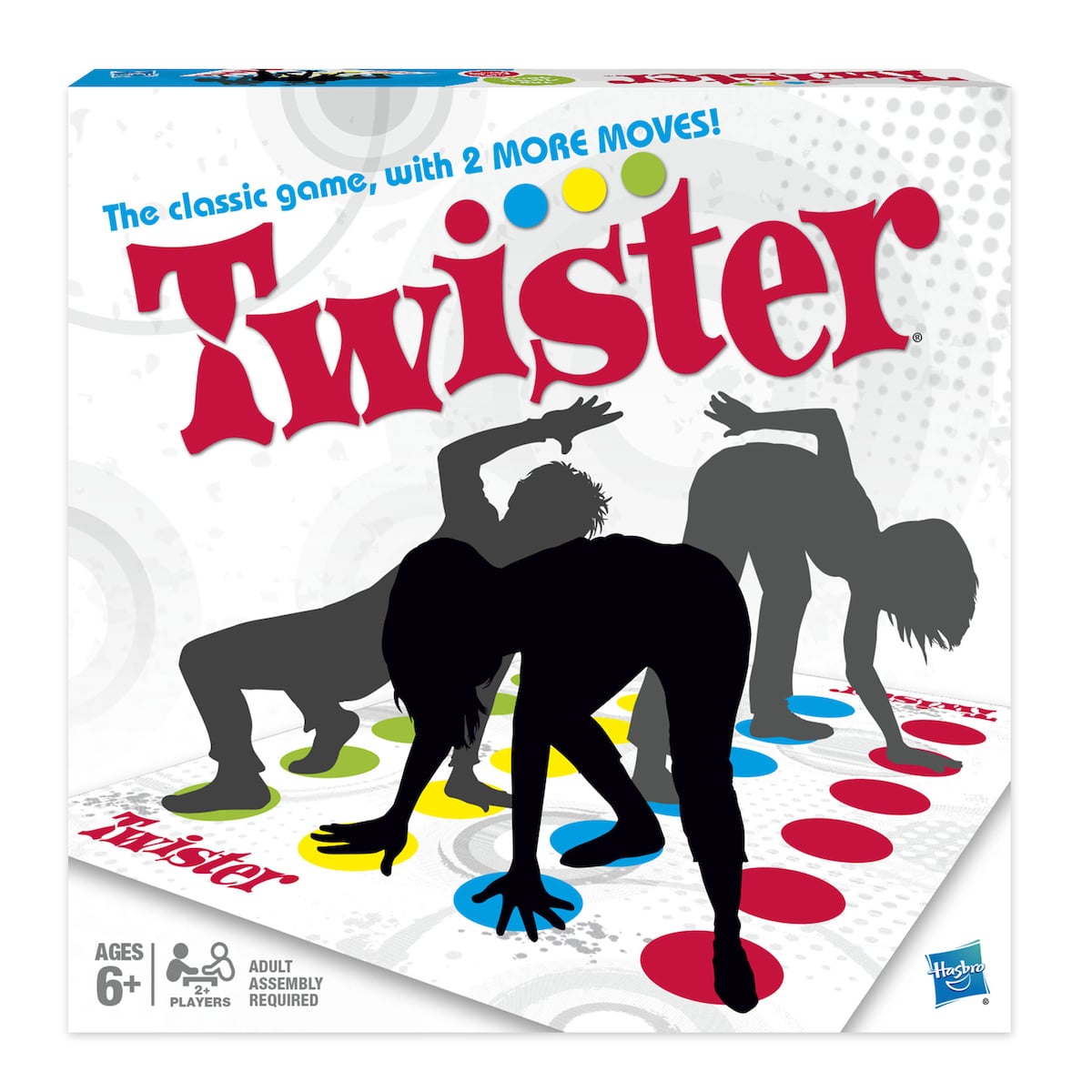 Although it may not be a board game technically speaking, there is a board involved, so I guess that qualifies it to make the list! Anyway, drunk twister is almost guaranteed to send one, or more of you and your friends to the A&E department at your local hospital, but at least it is something that you can tell the kids and grandkids about in future!

You can buy twister mats that are 2x the size of the original mat to give people more of a chance, and what I love about this is that you can also doctor up that spinner a little bit and add in some funny and crazy commands and dares! It is one of the cheaper games on the list and is bound to have everybody laughing and of course, drinking! 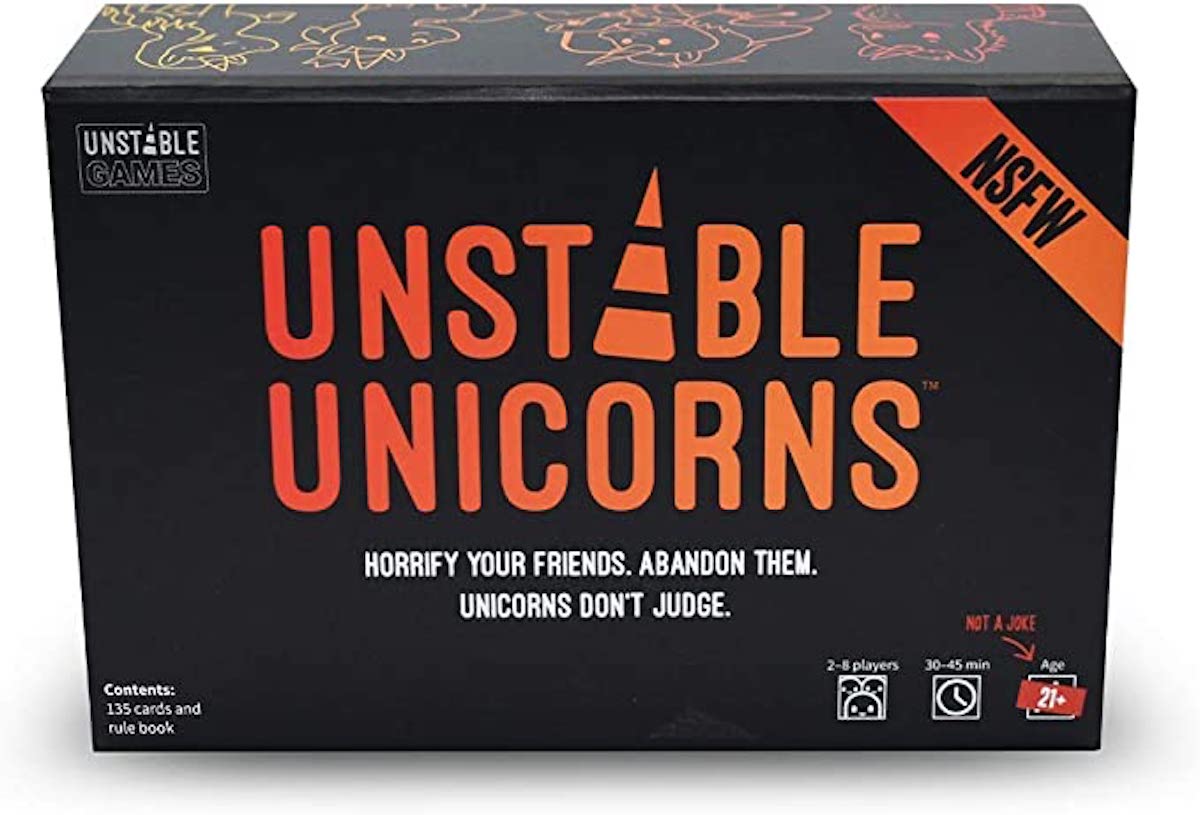 The aim of this game is sabotage! Probably one of the more complicated games on the list, the NSFW edition of Unstable Unicorns is all about collecting 7 unicorns for your “stable” all the while, you are trying to sabotage and prevent your friends from collecting unicorns themselves. Use magic cards, upgrade, and downgrade both your and your opponent’s stables, and be as stealthy as possible in doing so, trying not to get caught is the ultimate way to win this game.

How do I make it a drinking game? I hear you say, well simply take a drink every time you lose a unicorn or take a shot every time you are caught out or if someone uses a “neigh card” on you! There is a variety of editions of Unstable Unicorns available, many of the editions are catered for a younger audience as well, so this is a good game to play with families or with younger people at gatherings. As for friendly gatherings or parties, the game seems a little too complex considering the fact that most players will be intoxicated pretty quickly. 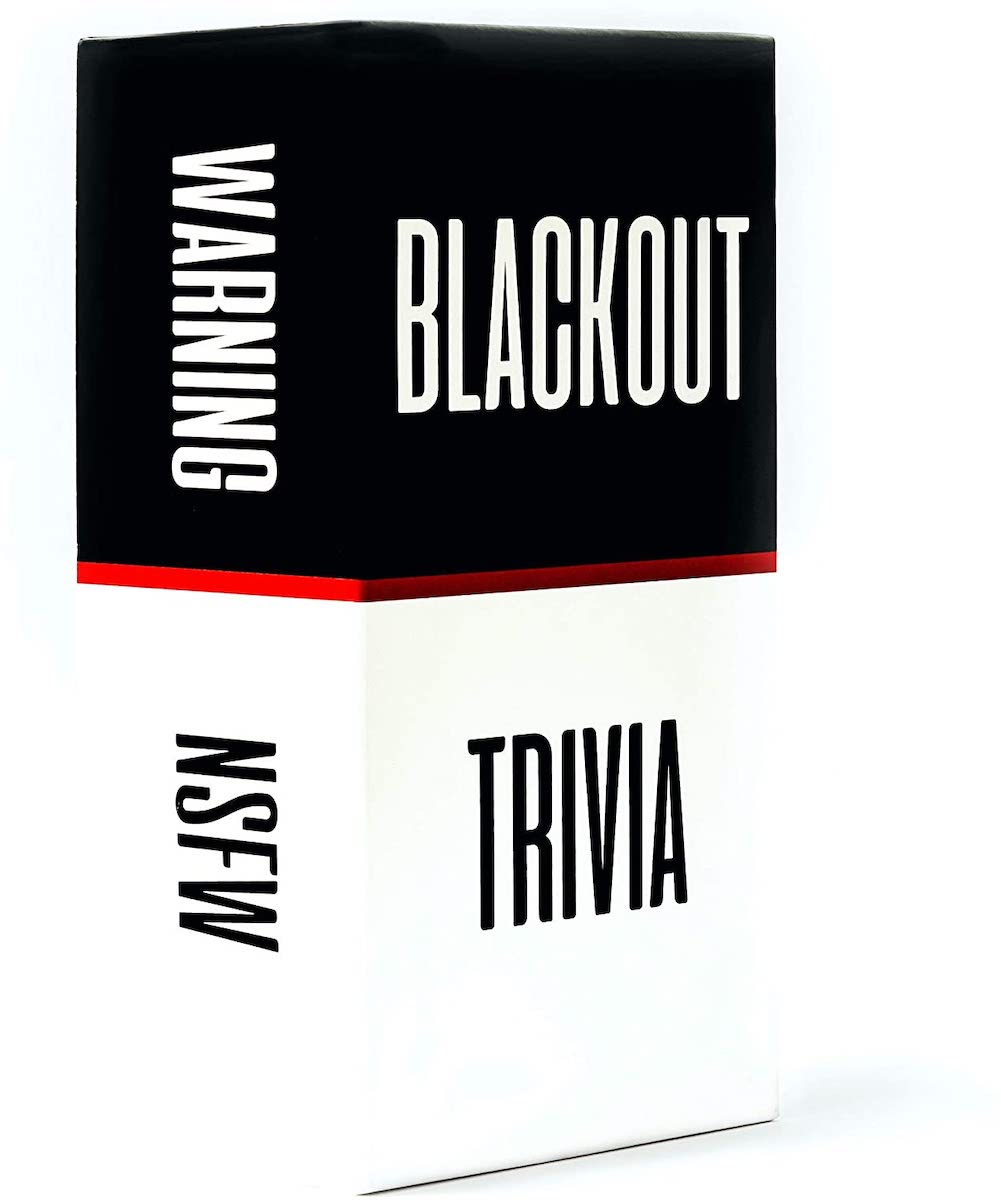 Here is another game that will test your knowledge, your pride, and your ability to drink a lot of alcohol. Blackout trivia is exactly what it says on the tin, there are black trivia cards, red trivia cards and white challenge cards, all made with the aim of getting you and your teammate(s) drunk and doing hilarious and fast-paced challenges as fast as possible.

The reviews for it online are hugely positive, some do suggest that it is a bit TOO wild, so trigger warning for anyone that might be offended easily or is not into wild or crazy nights, but for $30 and with over 500 hilarious cards, Blackout Trivia is a game that will keep you and your friends entertained for hours. Perfect for pre-gaming before a night out, or for a fun and alcohol fuelled night in, it ticks all of the boxes. 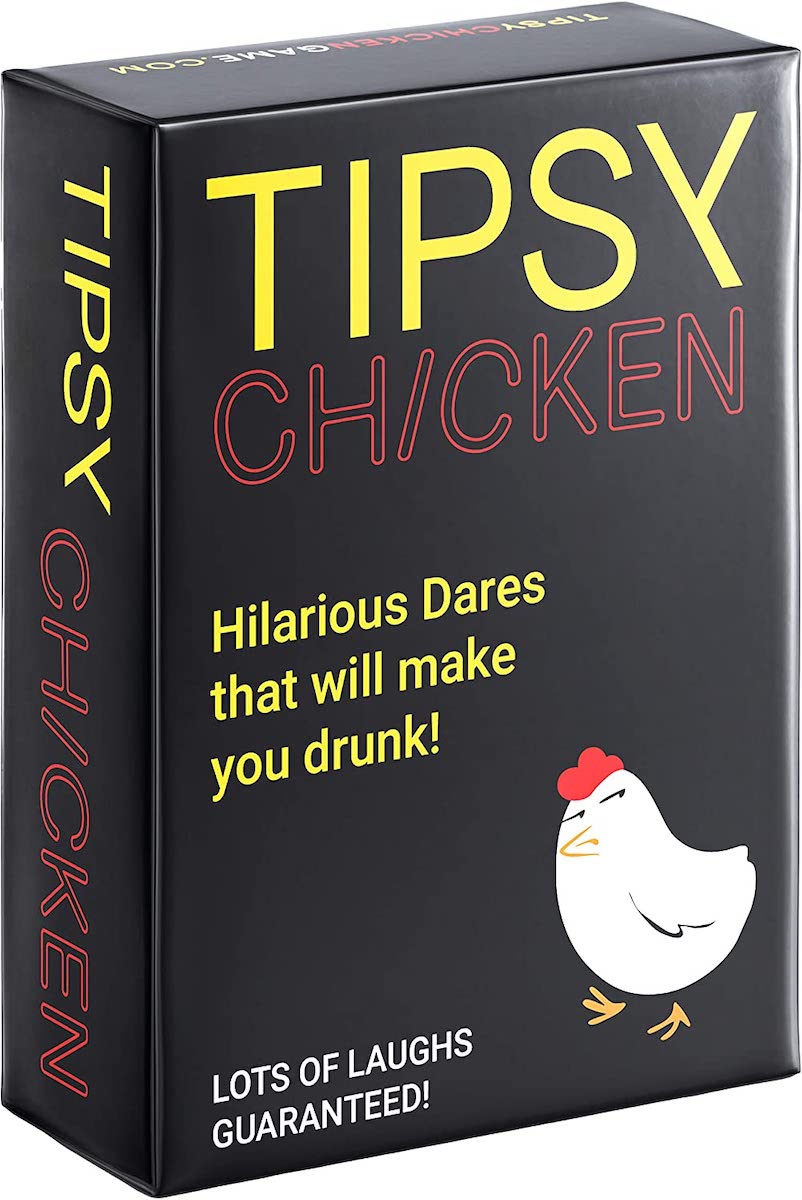 Last, but by no means least, is Tipsy Chicken, a game full of dares that will determine who is the most fearless out of your friend group! When it is your turn, simply accept and complete the dare and get a GOAT reward card, or chicken out and get a chicken card. The first player to get 13 GOAT cards is the winner!

There are some hilarious sober dares too that do not involve alcohol, but they are just as funny, a personal favourite is having to eat food off of somebody’s arm or letting any of the other players add something to a glass of water and you have to drink it! It is simple, fun and does not cost a bomb either, priced at about $25-28, it is in the middle of the road in terms of pricing on this list.