Lately there have been a ton of photos popping up all over the web of people dominating nature – for example, those rather popular photo techniques of showing someone holding the sun, or having some other kind of direct interaction with it. This has also been done with animals, clouds, mountains, famous landmarks and a number of other objects.

If you have been curious about what this fashionable photography process is, it is called “Forced Perspective”. This is a way of changing the size of an object, the location or the context of an environment by utilizing perspective and optical illusion tricks.

Using angle, proximity, position and props, you can set up a very interesting, inspiring and often humorous looking picture that will be sure to grab a lot of attention.

Five Examples of Forced Perspective at Its Best

This is perhaps one of my all time favorite forced perspective photos. At first glance your mind might have some trouble working out what is going on. You have one man sitting on the ground, his back against the wall.

Another is seemingly running forward to aid a third, who is hanging from a protrusion in the wall between them. But upon further inspection (and with a tilt of the head) you realize that all three are actually laying on the ground. The protrusion is a fire hydrant and a car going by in the far side of the picture turns the whole image around. Simple, brilliant and well made.

This one shows how you can give the impression of infinite distance with a few people and a flat background. The desert setting is barren and fascinating, and the colors of the ground meeting the gorgeous blue of the sky clear to the horizon is breathtaking.

But the focal point of the picture is a set of seven people evenly spaced into the distance. Each is striking the same pose. The way that they are set up makes it look like the chain of people could be going on for miles. In reality, they are placed a few feet from one another all the way back. 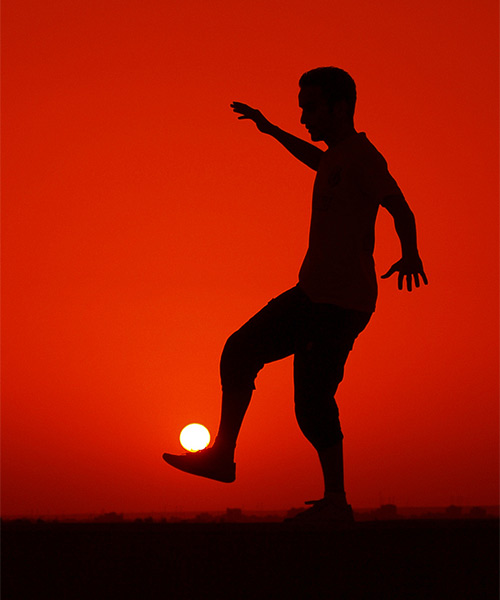 This is one of those sun perspective photos I was talking about earlier. It works by putting someone on a generally flat surface outside during sunset, when the flaming star is low in the sky. From there, the person poses in a way that makes it appear small and being handled in some manner by the subject.

In this case they ignored the usual convention of having him holding in, and instead waited for the sun to be at a lower point, dipping almost to the horizon. He then pretends to balance it like a soccer ball on the top of his foot.

The colors in the background of the sky mix with the fact that he is in complete silhouette to make an awesome shot that is more memorable than most sun perspective photos.

This is another popular photo perspective style. It shows a grown man being ‘dangled’ by a young child, possible his daughter. Using distance as a way of creating a different size is a simple method of generating a forced perspective.

This is one that is used continuously in movies, on television and in art. It gives the illusion of a more dramatic size difference by positioning the camera to catch two figures a number of feet from one another. It is very easy to do, and will be one of the biggest tools used for anyone interesting in this kind of photography.

The problem with using famous landmarks for perspective shots is that they are often overdone.

I have lost count of the number of photos I have seen where someone is using their fingers to look like they are squeezing the Eiffel Tower, or keeping the Leaning Tower of Pisa upright by resting it on their backs. Yes, it is a cute tourist concept for a personal album. But it is a bit tired for any other purposes.

This shot manages to bring something new to the method by taking advantage of something that was there already. The crane was placed and left by construction workers, so it was not a set shot. Instead, the photographer found a location that would give them the perfect angle and used it along with their chosen landmark to create something new and exciting.

Each one of the examples above gives you a look at the different practices that are used in forced perspective. In the end you will be using four different tools to create different types of image in this genre:

Most of the picture can be done through general setup. A location and angle are set, and the subject(s) are used with or without additional objects. The environment will also lend context or additional material for you to create your shot.

Editing will be the final process, though in some cases this might not be necessary. Most photographers will use editing to enhance the shot. Sometimes this is as simple as just turning it to a different angle, like in those pictures that shot the world as upside-down.

It isn’t difficult to create these illusions. It really comes down to being creative enough to think of opportunities to do it. Once you put yourself in that mindset you will see endless possibilities, and from there it is just setting it up. In the meantime we have collected some of the best examples below, enjoy!

Note: All the images are linked to their original authors, we do not take credit for any of these works.