Who Is Greg Gutfeld?

Gutfeld is best known for being the current host of Gutfeld!, a late-night talk show that airs on the Fox News Channel. He’s also one of the five hosts and panelists on The Five, a political talk show that also airs on Fox News.

Gutfeld is considered one of the longest-serving Fox News talk show hosts. Before landing his current hosting roles, he hosted a late-night talk show on the network known as Red Eye.

Greg Gutfeld is also a brilliant author. He has written close to ten books so far, four of which were featured on the New York Times bestsellers list.

Gutfeld attended Junípero Serra High School and later graduated from the University of California, Berkley, in 1987 with a bachelor’s degree in English. 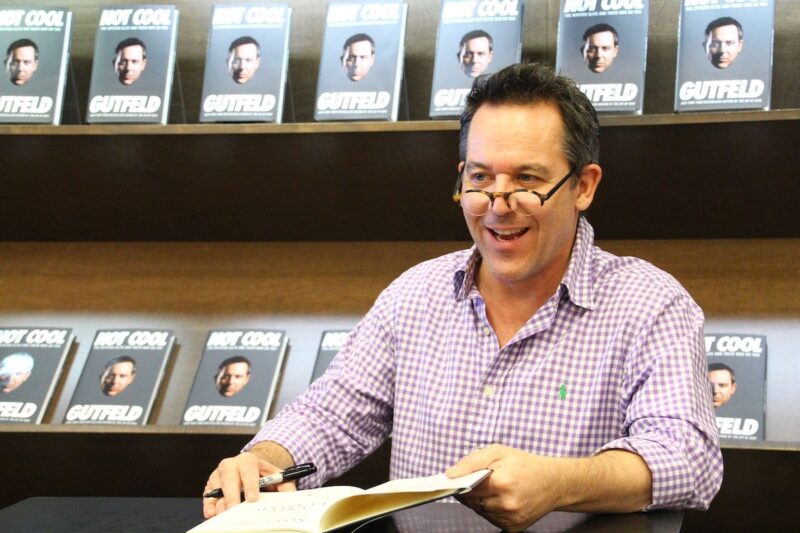 After graduating from college, Greg Gutfeld became an intern at The American Spectator, working as an assistant to conservative writer R. Emmett Tyrrell. He later worked as a staff writer at Prevention magazine before becoming an editor for a variety of Rodale Press magazines.

In 1995, Gutfeld was hired by Men’s Health magazine as a staff writer. Four years later, he earned a promotion to become the publication’s editor-in-chief.

In 2000, Greg Gutfeld was replaced as Men’s Health editor-in-chief by David Zinczenko. Gutfeld later became editor-in-chief of Stuff magazine and was an instrumental force behind the magazine’s astronomical growth in the early 2000s. During his tenure as editor-in-chief, Stuff magazine’s circulation increased to 1.2 million from just over 750,000. However, Gutfeld was later fired from Stuff following a publicity stunt in which he hired several dwarfs to cause mayhem during a conference of the Magazine Publishers of America.

Between 2004 and 2006, Greg Gutfeld worked as an editor of Maxim magazine. In 2005, Gutfeld became one of the first contributors to the newly-launched The Huffington Post. He continued contributing to the publication until October 2008.

On February 5, 2007, Gutfeld became the host of Red Eye, a late-night hour-long talk show on Fox News. He hosted the show until February 2015, after which he was succeeded by Tom Shillue.

On July 11, 2011, Gutfeld became one of the hosts and panelists of The Five, the political talk show aired on Fox News. On May 31, 2015, he started hosting The Greg Gutfeld Show, a weekly late-night talk show that also aired on Fox News. The show’s name was eventually changed to Gutfeld! on April 5, 2021.

Other notable books by Greg Gutfeld include:

• Lessons from the Land of Pork Scratchings
• The Bible of Unspeakable Truths
• The Joy of Hate: How to Triumph over Whiners in the Age of Phony Outrage
• Not Cool: The Hipster Elite and Their War on You
• How To Be Right: The Art of Being Persuasively Correct
• The Gutfeld Monologues: Classic Rants from the Five
• The Plus: Self-Help for People Who Hate Self-Help

Greg Gutfeld has undoubtedly enjoyed an illustrious journalism and television career. He has also earned millions from his various endeavors. As of April 1, 2021, Gutfeld had a net worth of $13 million.

Greg Gutfeld reportedly earns $7 million annually from Fox News alone. Coupled with his other income streams, such as earnings from book royalties, it’s safe to assume that Gutfeld makes $8 million to $10 million annually.

Gutfeld’s self-titled show which airs on Fox News remains his biggest hosting gigs to date. In May 2020, Nielsen reported that the show was averaging 2.862 million viewers across four episodes. The ratings placed Greg above renowned hosts like Jimmy Fallon, Stephen Colbert, and Jimmy Kimmel, and also earned him an unsolicited tweet from President Donald Trump. The tweet read…

“Wow! Congratulations to Greg Gutfeld, a one-time Trump Hater who has come all the way home. His ratings easily beat no talent Stephen Colberg, nice guy Jimmy Fallon and wacko ‘last placer’ Jimmy Kimmel. Greg built his show from scratch, and did a great job in doing so.”

Greg Gutfeld’s journalism career wasn’t without its challenges. However, Gutfeld is remembered for leaving his mark in most publications that he worked for. For instance, during his tenure as editor-in-chief of the Stuff, the magazine’s circulation increased from 750,000 to a whopping 1.2 million.

2. Own up to your mistakes

During a segment of Red Eye that aired on March 17, 2009, Gutfeld made some mean remarks targeted at the Canadian government’s military efforts in Afghanistan. The remarks, which were posted on YouTube just three days following reports of casualties of four Canadian soldiers in Afghanistan, sparked widespread outrage. However, Gutfeld would later apologize, claiming that his remarks were made with good intentions.

Greg Gutfeld was once a fierce critic of President Donald Trump. However, he later turned into one of Trump’s most vocal defenders. Gutfeld even added his voice to the growing calls for vote recount following the hotly-contested 2020 presidential elections in which Trump lost to Democratic nominee Joe Biden.

“A funny thing about tolerant people? They’re really only tolerant when you agree with them.”

“A Smith & Wesson does more for empowering women than Feminism ever could.”

“Celebrities are the doormats of power.”

“Private citizens and companies are always seen as evil and greedy, because they want to profit. But the government pick your money any chance it can get, but they’re never called greedy.”

“The first mistake is trying to explain morality to a terrorist. Like trying to teach a rock to drive. It is impossible.”

Greg Gutfeld is a journalist, political commentator, television talk show host, and author who has a net worth of $13 million. Gutfeld started his professional career as a writer and editor for numerous magazines before shifting his focus to television. He’s currently considered one of the most influential political commentators on the Fox News Channel.