Apple has been advertising for nearly 39 years. They started in 1976 and since then, the world has witnessed the company’s evolution – whether it was through adverts or innovative gadgets and machines.

Apple ads have made us wonder, laugh out of pure joy, cry, and most importantly, they made us ask ourselves – What is Apple up to now?

Apple’s first ad resembled a spammy newsletter. The kind you get in your mail box every Sunday morning. Using whitespace as a design element wasn’t on Apple’s set of rules back then. You can clearly see that their 1976 ad was text heavy, and it displayed only two images. Sprinkled with a lot of text bolding, it made it look like they were on a tight budget and covering every inch available was crucial. 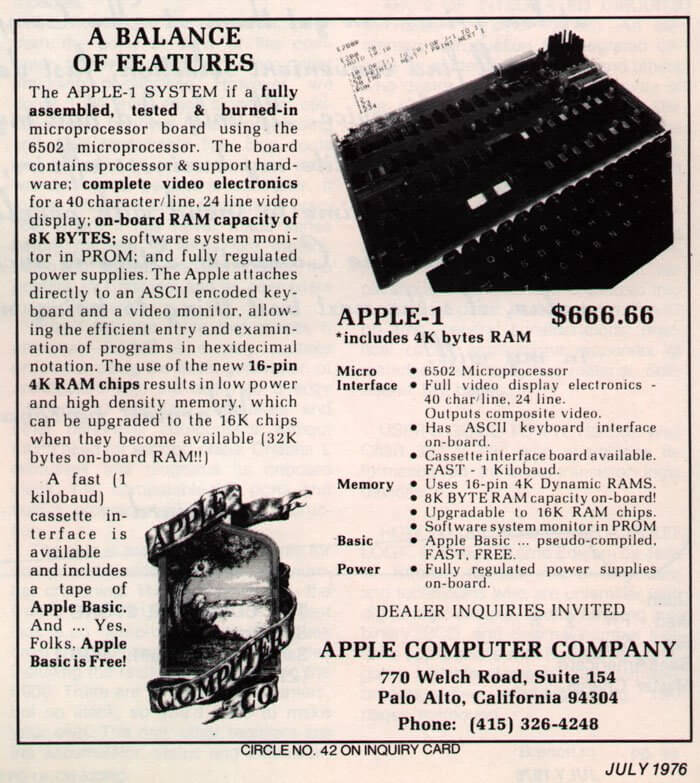 In 1979, Apple ran one of their worst ads – it was titled The Garden of Eden.

Yup, that’s a naked man holding an Apple computer, but bear with me just for a little. Get passed Adam and take a look at the text. This ad featured a competition of sorts. The winner was granted a one week trip to Hawaii for two. 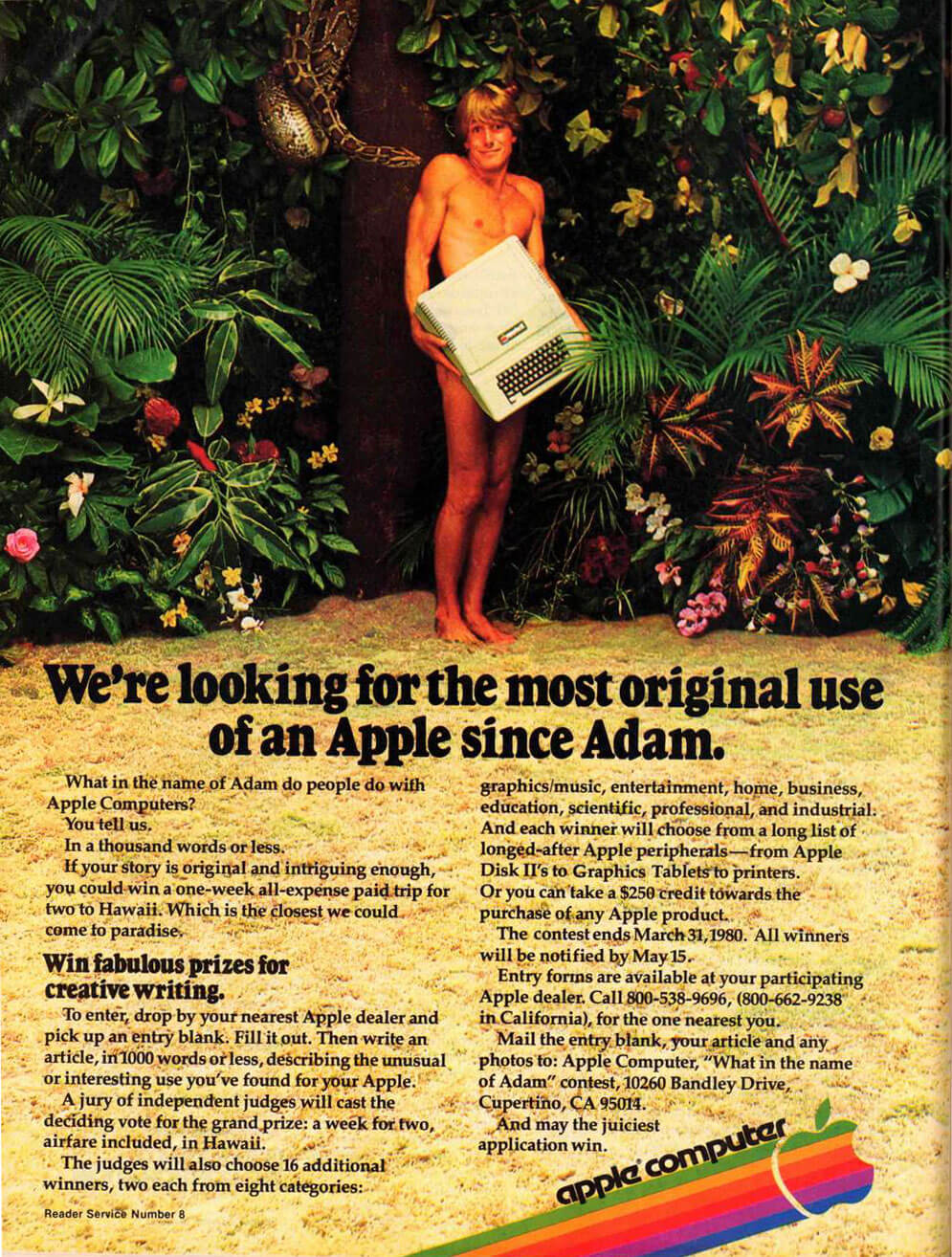 It was time for Apple to step up their game, and they did so in the 80s.

Well, they didn’t do so at the beginning of the decade.

They still didn’t have brand recognition, but the company was working to find what best suits their style. Their first experiments in the 80s were, uhm, pathetic, to say the least.

Still going hard with text heavy ads that were light on images, Apple tried hard to convince tech enthusiasts that everyone needs a computer – an Apple computer especially. 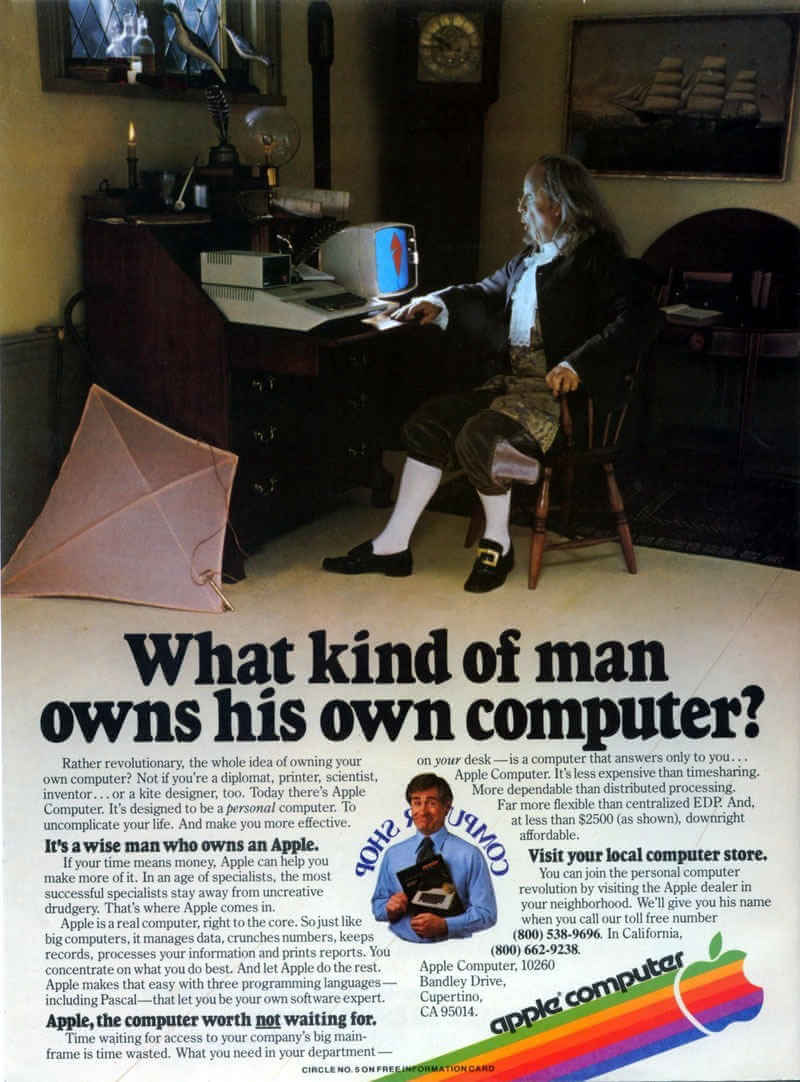 Thomas Edison, Henry Ford and Ben Franklin are all using an Apple computer. Who needs an actual kite when you have a virtual one, amirite guys? Guys?

One failed experiment, another one to go I guess.

In 1981 Apple decided to try out humor and they almost got it right. Only if it were a little bit longer than 30 seconds. The commercial actually made me laugh because Dick Cavett’s delivery is spot-on, even though, to today’s standards, it’s obviously cringe-worthy and forced.

Talk show host Dick Cavett plays the role of a chauvinist man-pig that asks the poor little, seemingly, stay at home woman misogynistic questions. Is the little wifey enjoying her Apple computer to store her recipes? Does she manage to get her pretty head around this complicated machine?

Welp, guess what Dick, she’s trading gold futures. While Cavett continues to ramble about how Apple computers are the best, the woman’s delivery at the end is so satisfying – I also own a small steel mill.

It’s funny and engaging, but after about five years Apple still didn’t have brand recognition.

1984 arrived and with it the infamous super bowl ad directed by Ridley Scott.

It was the turning point for Apple. Set in a dystopian world a la 1984, written by George Orwell, the commercial suggests that the totalitarian movement is Microsoft’s PC and that only the new Apple computer can bring freedom to the enslaved masses.

Honestly, it was a great ad, but it still didn’t quite convey that Apple vibe. 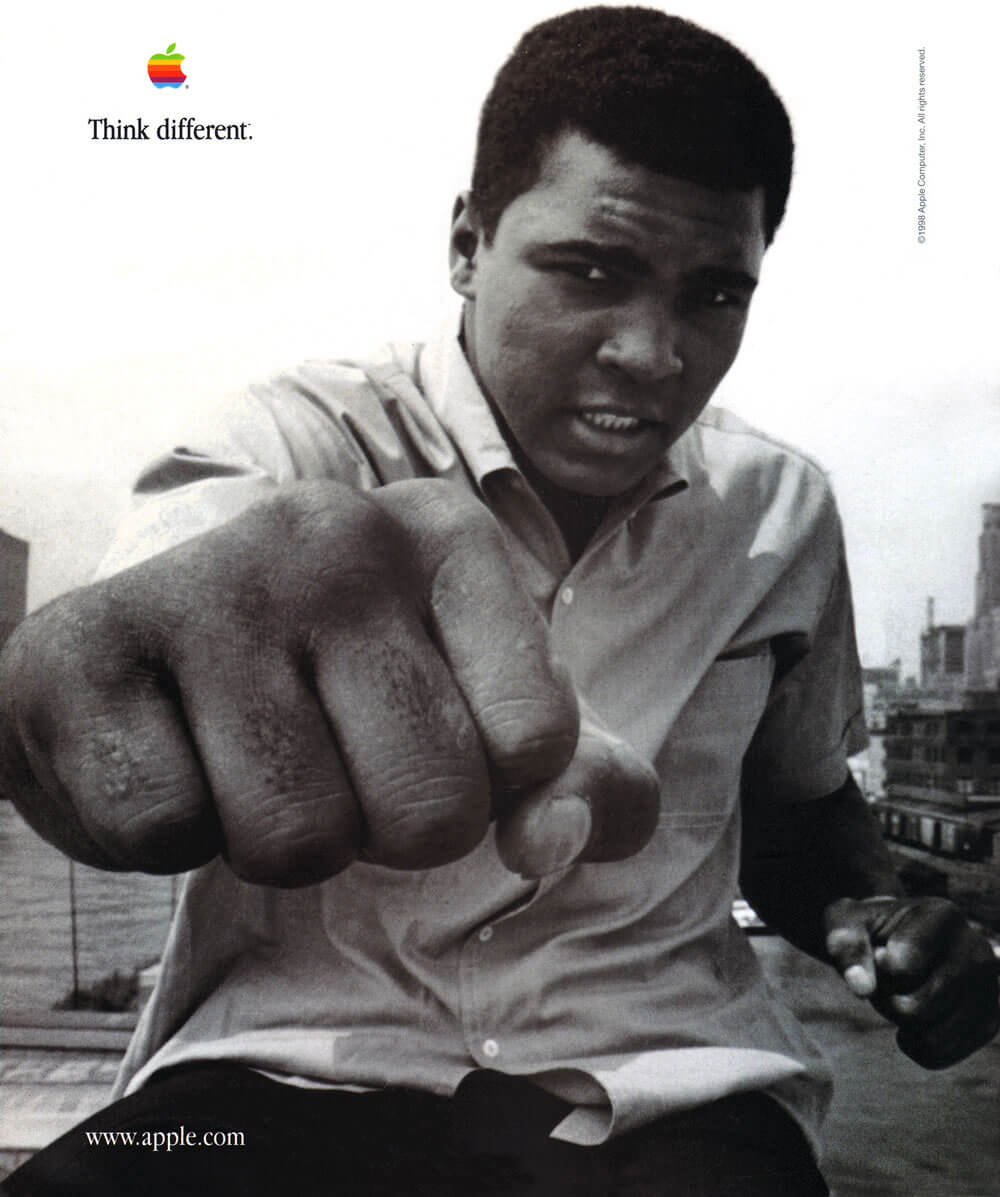 The 90s were great and confusing. However, Apple managed to make a name for itself not only with their gadgets and machines, but also with their ad campaigns. Finally, we had something different.

With the iMac launch in the 90s, the company shifted for more artistic-friendly ads. The importance of using whitespace as a design element has its origins in this era.

No more text heavy ads and Apple’s new logo Think different got the company’s brand recognition that they have always wanted. Frankly, it’s one of my favorite Apple advert campaigns to date.

The 90s were filled with a vibrant and full of life palette of colors. Apple’s new line-up of computers were the perfect products for commercials. Ads were jolly, euphoric and gleefully fun.

During the 90s, every student wanted an iMac and everyone wanted to pick the color that matched their personality. 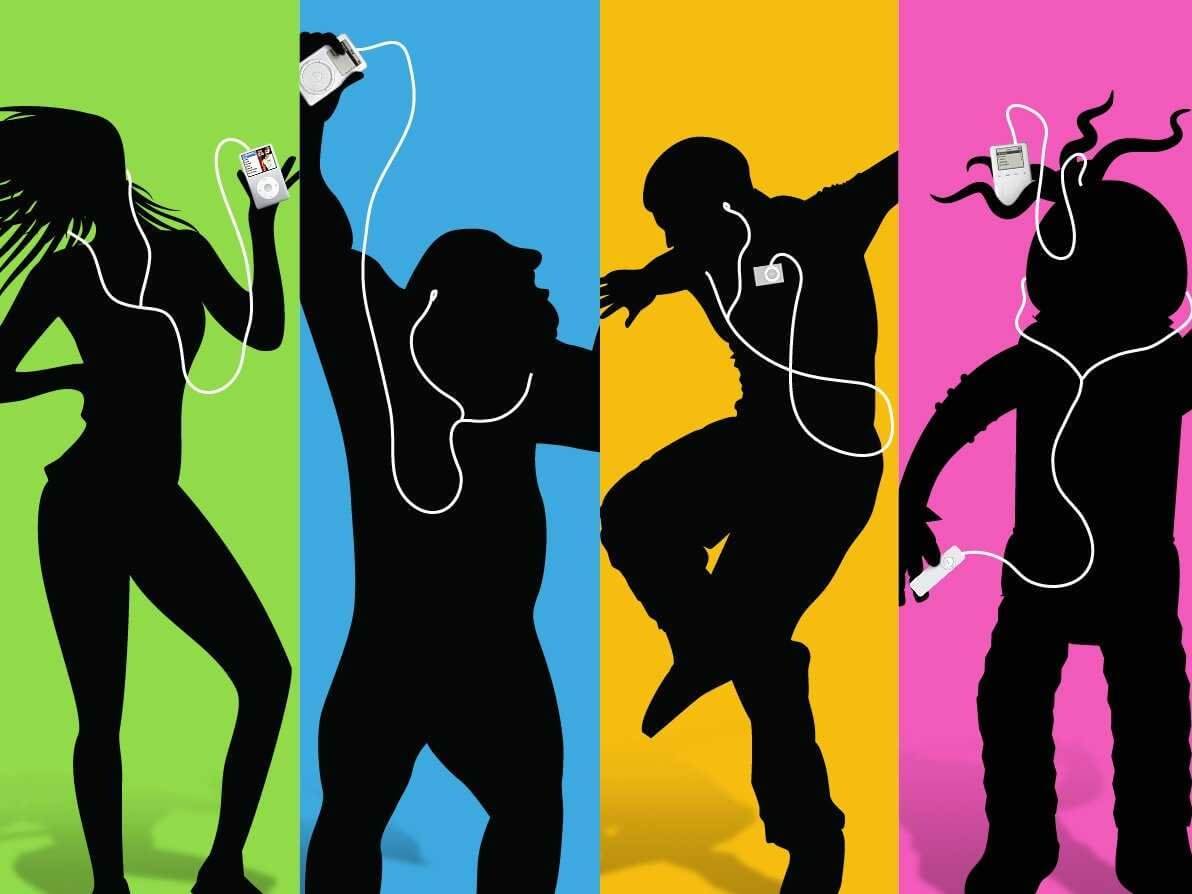 By the year 2005 Apple was known around the world as one of the most innovative tech companies. The iPod launch put Apple on a pedestal for some. Regardless what you might think of their products, they really know how to pick ad agencies.

Steve Jobs initially disliked the proposal for the popular iPod silhouette ads, according to Business Insider. The commercial showcased silhouettes dancing to the music from an iPod, with a colorful and eye-catching background.

Steve Jobs was known for disliking advertisements that would later become iconic for Apple.

In 2006 we watched the Mac versus PC campaign. Justin Long was the cool and laid-back Mac and John Hodgman was the jittery and confused PC. Consistency, along with Wes Anderson symmetry, was key. All of the ads in the campaign were shot on a white background, with Justin and John discussing various topics from apps to computer functionality.

They were highly entertaining and these commercials run for three consecutive years.

Apple is known across the world as a leading company in the tech and entertainment industry. They have changed quite a lot over the past 39 years. Ads turned from being text hogs with little to no images, to humoristic and engaging commercials filled with art.

One ad that just stuck with me in this new modern-Apple era was the Change.

It highlights how easy it is to record music on your iPad – whether it is vocals, drums, lead or rhythm parts. Fun fact, Change was filmed entirely on an iPad.

Apple showcases how their product can be used to write and record music, and in the end you can even film your music video clip.

Apple Watch commercials were great too – emotion-provoking, amusing, and a little bit self-assuring that if you want something you can do it, regardless of your age.

Apple’s new device is currently leading smartwatch sales across the world and a next gen Apple Watch is rumored to be released next year.

We’re more than curious to see what Apple comes up with next. More so, considering that they are planning on unveiling a new Apple TV and a new iPhone this September.

I started writing as soon as I learned what to do with my hands. Now I write about emerging technologies, and everything gadget-related. I tend to take my coffee dark as night and sweet as sin. Also, I tend to love Neil Gaiman to bits.