When you need inspiration, who do you usually turn to?

It’s normal for anybody to have someone they listen to whenever they need motivation. Most people turn to their family. Several pour their heart out to their friends, expecting great advice in return. A good number look up to their bosses and expect them to share secrets to success with them.

But aside from these examples, you may have someone of influence whose story has inspired you in so many ways. You may not know these influential folks personally, but their words are enough to give you that boost you need to keep moving forward.

Walt Disney is one of those great individuals that a lot of people look up to for inspiration. This is not surprising at all, of course. The man has indeed done great things and has inspired generations.

Walt Disney was not exactly born into a well-off family. He often fell asleep in class when he was young, simply because he had to wake up early to do newspaper rounds and come home late at night after doing the same task.

Somehow, he knew early on what his passion was. He was already taking art classes during his free time. He also became a cartoonist for his high school paper. Eventually, he started earning a living with his skills.

It was his passion for what he did that made him experience the success he achieved for the rest of his life.

The Words of Walt Disney

As someone who has been through so much, it is understandable that Walt Disney would have so much wisdom about life in general.

This is also the reason why most Disney movies have so many lessons in them. Walt Disney is not someone who just wishes to entertain – he is also someone who wishes to set the right example and inspire people to become successful the same way he did.

Below are some of the most inspiring quotes from Walt Disney. Take the time to think about each of these lines. Who knows? These could be the fire you need that would set you on your way to success. 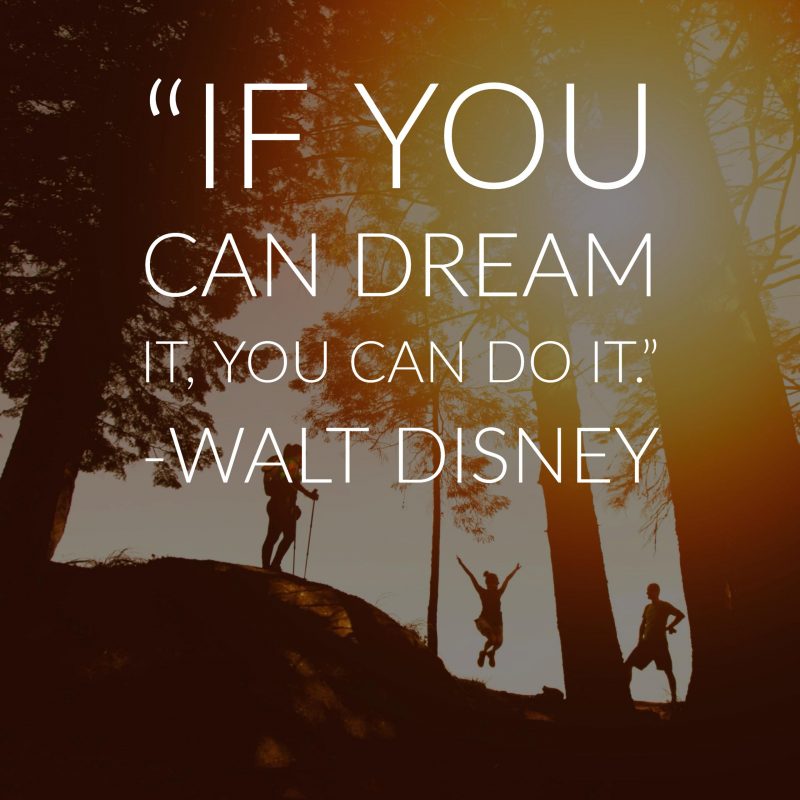 “All our dreams can come true, if we have the courage to pursue them.” – Walt Disney

“The more you like yourself, the less you are like anyone else, which makes you unique.” – Walt Disney

“It’s kind of fun to do the impossible.” – Walt Disney

“The way to get started is to quit talking and begin doing.” – Walt Disney

“There is more treasure in books than in all the pirate’s loot on treasure island.” – Walt Disney

“When you believe in a thing, believe in it all the way, implicitly and unquestionable.” – Walt Disney

“I only hope that we don’t lose sight of one thing – that it was all started by a mouse.” – Walt Disney

“We believed in our idea – a family park where parents and children could have fun together.” – Walt Disney

“I try to build a full personality for each of our cartoon characters – to make them personalities.” – Walt Disney

“You’re dead if you aim only for kids. Adults are only kids grown up, anyway.” – Walt Disney

“I always like to look on the optimistic side of life, but I am realistic enough to know
that life is a complex matter.” – Walt Disney

“Of all our inventions for communication, pictures still speak the most universally understood language.” – Walt Disney

“When you’re curious, you find lots of interesting things to do.” – Walt Disney

“I do not like to repeat success, I like to go on to other things.” – Walt Disney

“Times and conditions change so rapidly that we must keep our aim constantly focused on the future.” – Walt Disney

“Whenever I go on a ride, I’m always thinking of what’s wrong
with the thing and how it can be improved.” – Walt Disney

“A man should never neglect his family for business.” – Walt Disney

“Disneyland will never be completed. It will continue to grow as long as there is imagination left in the world.” – Walt Disney

“Disneyland is the star, everything else is in the supporting role.” – Walt Disney

“All cartoon characters and fables must be exaggeration, caricatures. it is the very nature of fantasy and fable.” – Walt Disney

“I never called my work an ‘art’. It’s part of show business, the business of building entertainment.” – Walt Disney

“Crowded classrooms and half-day sessions are a tragic waste of our greatest nationals resource – the minds of our children.” – Walt Disney

“We did it Disneyland, in the knowledge that most of the people I talked to thought
it would be a financial disaster – closed and forgotten withing the first year.” – Walt Disney

“I believe in being an innovator.” – Walt Disney

“I would rather entertain and hope that people learned something than educate people and hope they were entertained.” – Walt Disney

“I have no use for people who throw their weight around as celebrities, or of those who fawn over you just because you are famous.” – Walt Disney

“Of all the things I’ve done, the most vital is coordinating those who work with me and aiming their efforts at a certain goal.” – Walt Disney

“I have been up against tough competition all my life. I wouldn’t know how to get along without it.” – Walt Disney

“When people laugh at Mickey Mouse because he’s so human; and that is the secret of his popularity.” – Walt Disney