Music has evolved throughout time and Johnny Cash is a household name that probably holds little familiarity to recent generations. The “Man in Black” was blessed with a rich baritone voice. He sang songs that celebrated the good things in life, as well as songs inspired by some of life’s sad realities and ironies.

Johnny Cash is a timeless country musician who influenced later artists not only of the same genre, but even rock artists such as Bob Dylan. Like many artists of various generations, Cash fought his own demons, led a colorful life, but emerged as a man who is more than just an icon. R. Cash, later known as Johnny Cash, was born on February 26, 1932 to Southern Baptist parents residing in Kingsland, Arkansas. Johnny wasn’t born with a silver spoon. At an early age, he worked in cotton fields with his parents.

The Great Depression, which occurred during those years, taught him a great deal as his family struggled to survive. This would later inspire him to compose songs based on the experiences and insights he had during this time.

Amidst this sad reality that he and his family had to go through, Mrs. Cash knew how to play the guitar and taught Johnny how to use it. By 12 years of age, he was already writing songs and singing them. By the time he was in high school, he sang for a radio station, KLCN.

In the 1950s, young Johnny enlisted in the United States Air Force during the Cold War and met Vivian Liberto. He was then stationed in Landsberg, Germany as a Morse Code Operator and it was here that he made his first band, the Landsberg Barbarians. After three years of being in the Air Force, he returned home and married her.

After 12 years of marriage, 4 daughters, drug and alcohol abuse, and womanizing, Vivian decided to call it quits and filed for divorce.

But while he was still married to Vivian, Johnny met June Carter in 1955 and the two became very close friends while touring together in the early 1960s. Two years after his divorce with Vivian, Johnny married his long-time friend and they had a son together.

June Carter belonged to a family of singers and after marrying Johnny, the two of them worked and made music together until the end.

The Man in Black Before he became a success, Johnny had to go through different jobs before he finally got into the music scene. He never lost sight of becoming a musician as he was set on becoming one.

In 1954, he signed a contract with Sun Records of Sam Phillips, the same person who discovered Elvis Presley. Johnny performed with other artists including Elvis and soon became well known in 1957 as a top artist.

Johnny frequently wore black during his performances. In fact, he wrote a song with the same title, Man in Black. In this song, Johnny explains the reason why he always wore black clothes. At a deeper level, Johnny had a special place in his heart for the poor and the downtrodden. Johnny even made sure to perform for prisoners all over the country free of charge.

Man in Black also reflected Johnny’s darker emotions. The pain and suffering he personally experienced in certain moments of his life. Aside from this, the song’s lyrics also talk about corruption and war.

Johnny Cash has written and sung songs for over 40 years and has been given special recognition and worthy awards for his life’s work. He has sold millions and millions of copies and has become quite an American asset. An older Johnny also starred in his own shows: Cash! and The Johnny Cash Show. The Johnny Cash Show was aired on television for three years, from 1967–1970. The show also featured other music artists such as Bob Dylan, Eric Clapton, Neil Young, and Stevie Wonder, to name a few.

Johnny’s fame has earned him millions of dollars but with his love for the poor, Johnny used his money to support organizations which catered to people with mental health problems, special children, battered or abused women, cancer societies, and Youth for Christ, among many others.

Johnny and his second wife, June Carter Cash, have written and sung songs together as husband and wife. June has helped Johnny get over some of his addictions and personal struggles and never left his side. When she died in 2003, months before he did, Johnny lived for nothing else but music until his death 4 months later.

Johnny Cash expressed himself, his thoughts, and his passions through his music. Even when music has drastically evolved over the years, Johnny Cash’s deep voice can still be heard, and his timeless songs still played.

Here are the best quotations that came from the lips of the man in black:

“All your life, you will be faced with a choice. You can choose love or hate…I choose love” – Johnny Cash

“I’m not bitter. Why should I be bitter? I’m thrilled to death with life.” – Johnny Cash 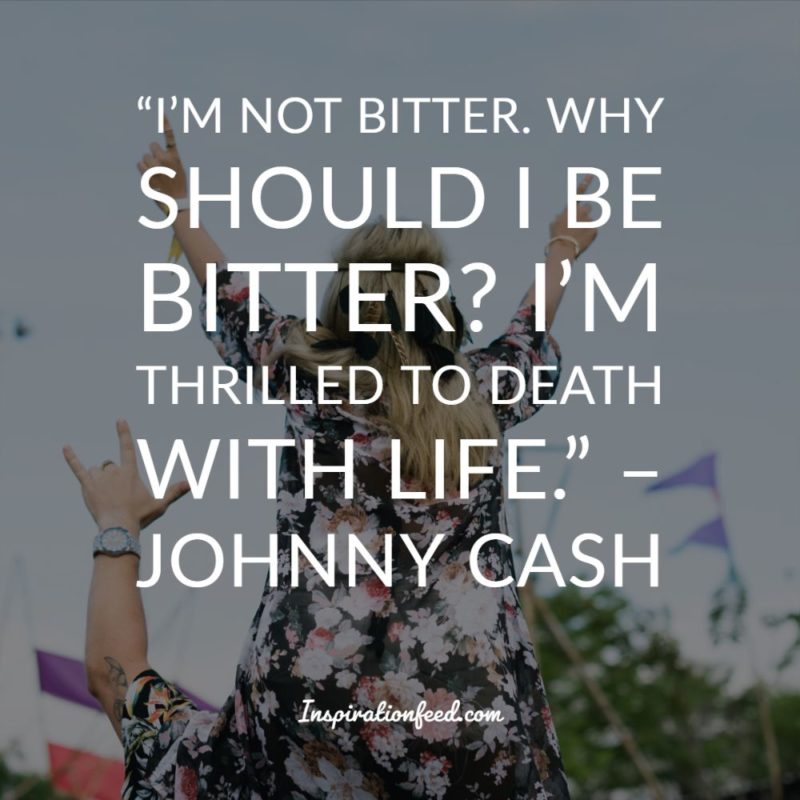 “My arms are too short to box with God.” – Johnny Cash

“They’re powerful, those songs. At times they’ve been my only way back, the only door out of the dark, bad places the black dog calls home.” – Johnny Cash 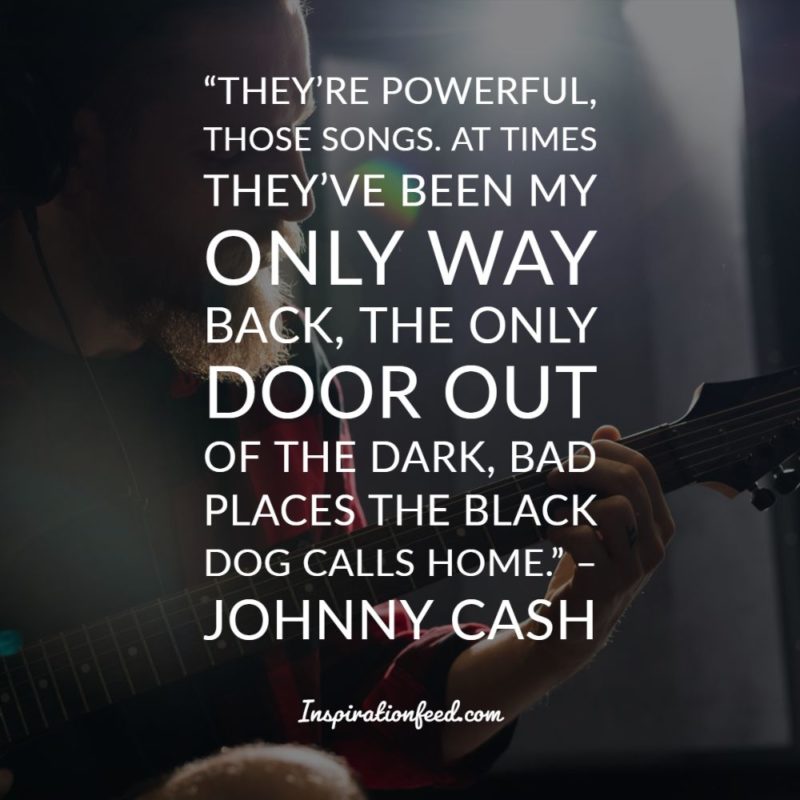 “I took the easy way, and to an extent I regret that. Still, though, the way we did it was honest. We played it and sang it the way we felt it, and there’s a lot to be said for that.” – Johnny Cash

“I have tried drugs and a little of everything else, and there is nothing in the world more soul-satisfying than having the kingdom of God building inside you and growing.” – Johnny Cash 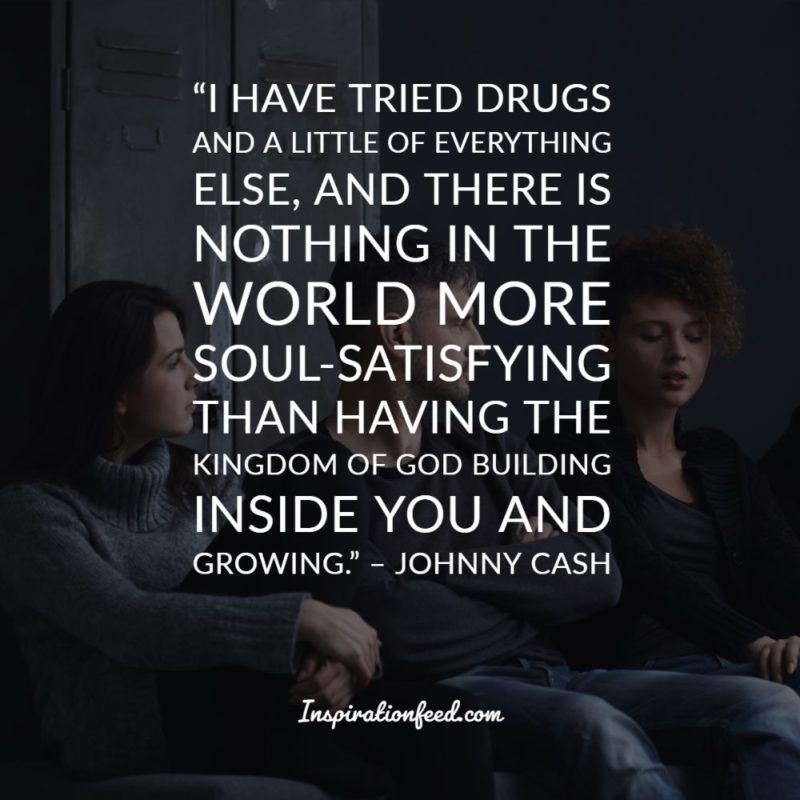 “However, neither he nor anyone else could have become the star Elvis was. Ain’t nobody like Elvis. Never was.” – Johnny Cash

“Success is having to worry about every damn thing in the world, except money.” – Johnny Cash 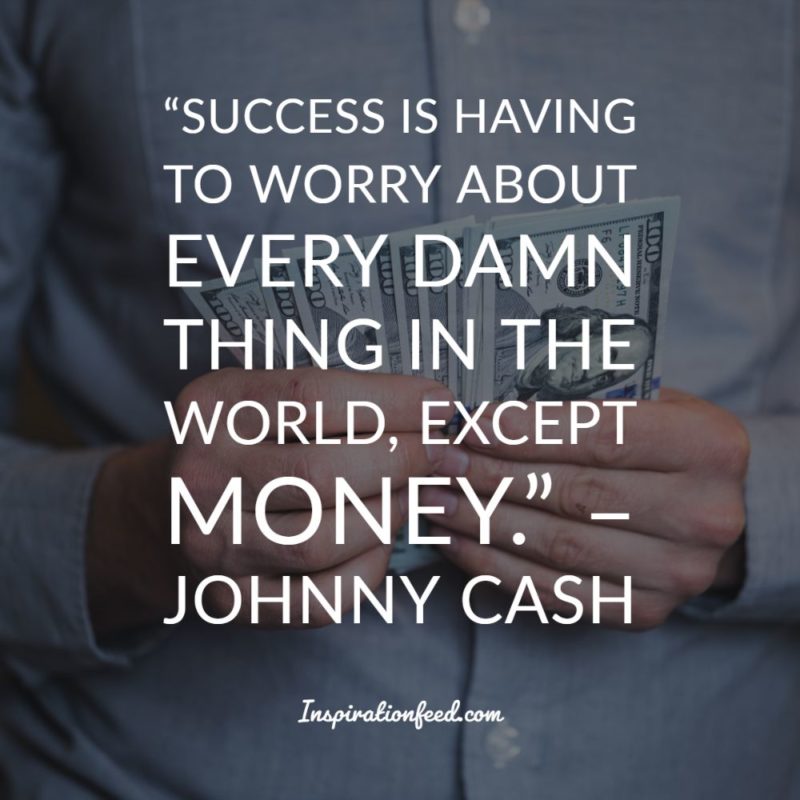 “Let me tell you, Mr. teacher when you say you’ll make me right, in five hundred years of fighting not one Indian turned white” – Johnny Cash

Related  30 Powerful Sun Tzu Quotes About The Art Of War

“You build on failure. You use it as a stepping stone.” – Johnny Cash 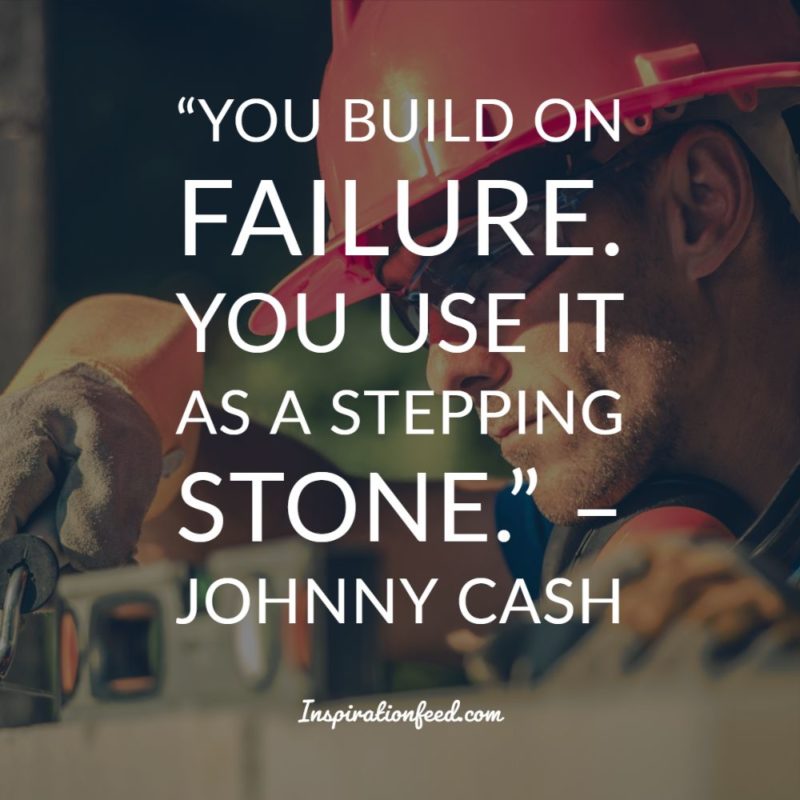 “When it gets dark and everybody’s gone home and the lights are turned off, it’s just me and her.” – Johnny Cash 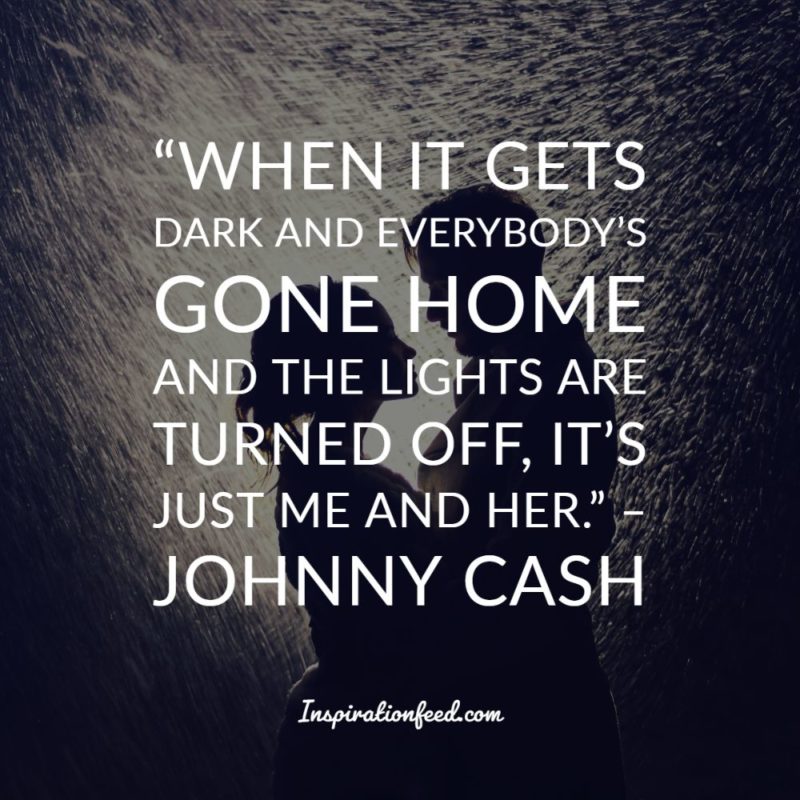 “There’s no way around grief and loss: you can dodge all you want, but sooner or later you just have to go into it, through it, and, hopefully, come out the other side.” – Johnny Cash 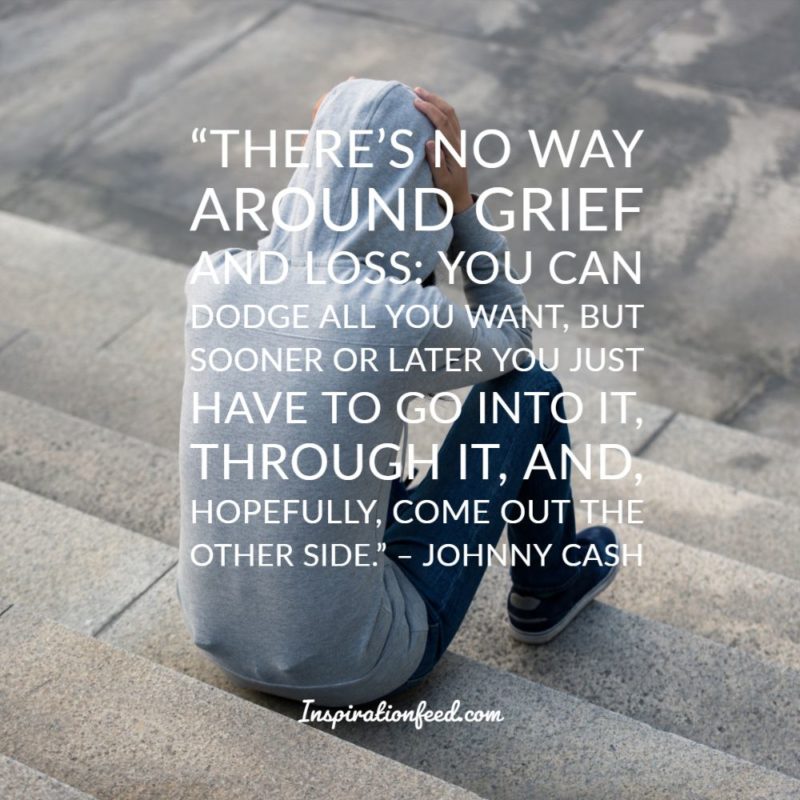 “Everybody was wearing rhinestones, all those sparkly clothes, and cowboy boots. I decided to wear a black shirt and pants and see if I could get by with it. I did and I’ve worn black clothes ever since.” – Johnny Cash 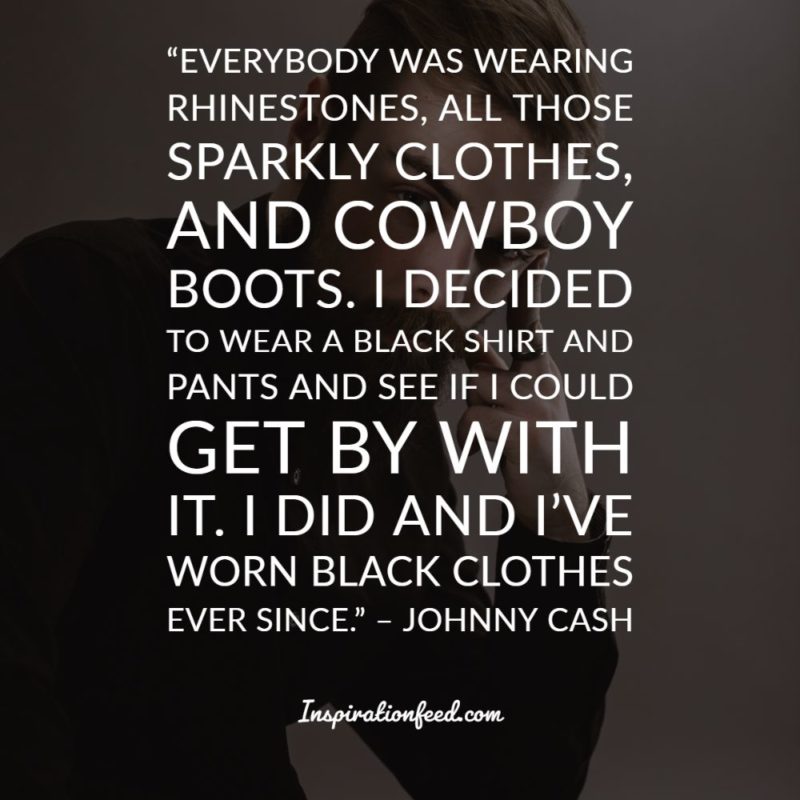 “I keep a close watch on this heart of mine. I keep my eyes wide open all the time. I keep the ends out for the tie that binds because you’re mine, I walk the line.” – Johnny Cash

There’s no more simple life with simple choices for the young.” – Johnny Cash

“This business I’m in is different. It’s special. The people around me feel like brothers and sisters. We hardly know each other, but we’re that close.” – Johnny Cash 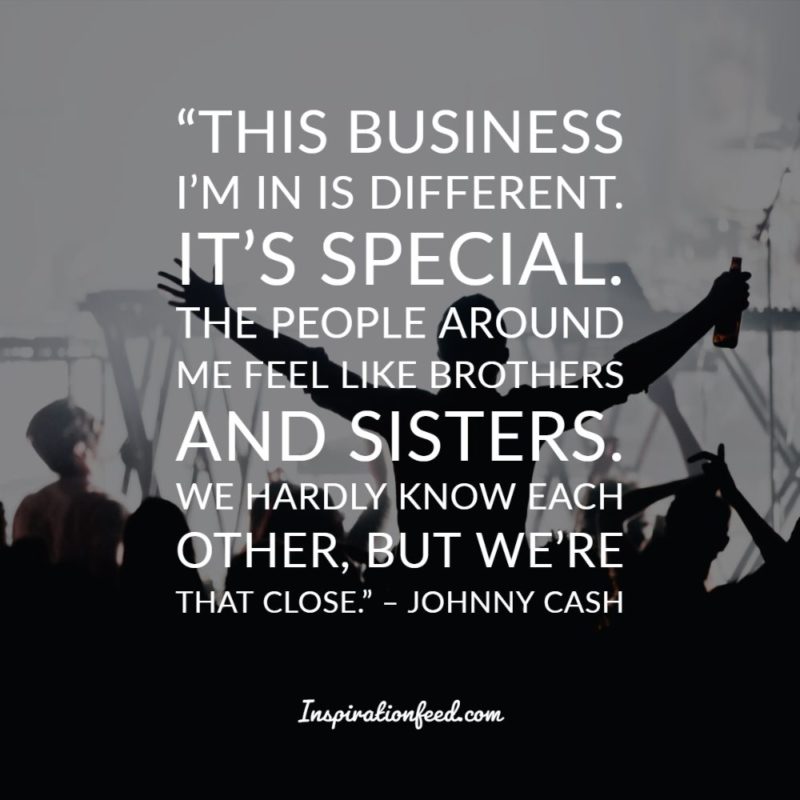 “The beer and the wurst were wonderful, but I was dying to be back in the South, where the livin’ was easy, where the fish were jumpin’, where the cotton grew high.” – Johnny Cash

“Somehow there’s been an immediate bonding between total strangers. We share each other’s triumphs, and when one of us gets hurt, we all bleed – it’s corny, I know, but it’s true.” – Johnny Cash “I wear the black for the poor and the beaten down, Livin’ in the hopeless, hungry side of town.
I wear it for the prisoner who has long paid for his crime, but is there because he’s a victim of the times.” – Johnny Cash

“I’ve never experienced anything like this before. It’s great. It turns up the heat in life.” – Johnny Cash 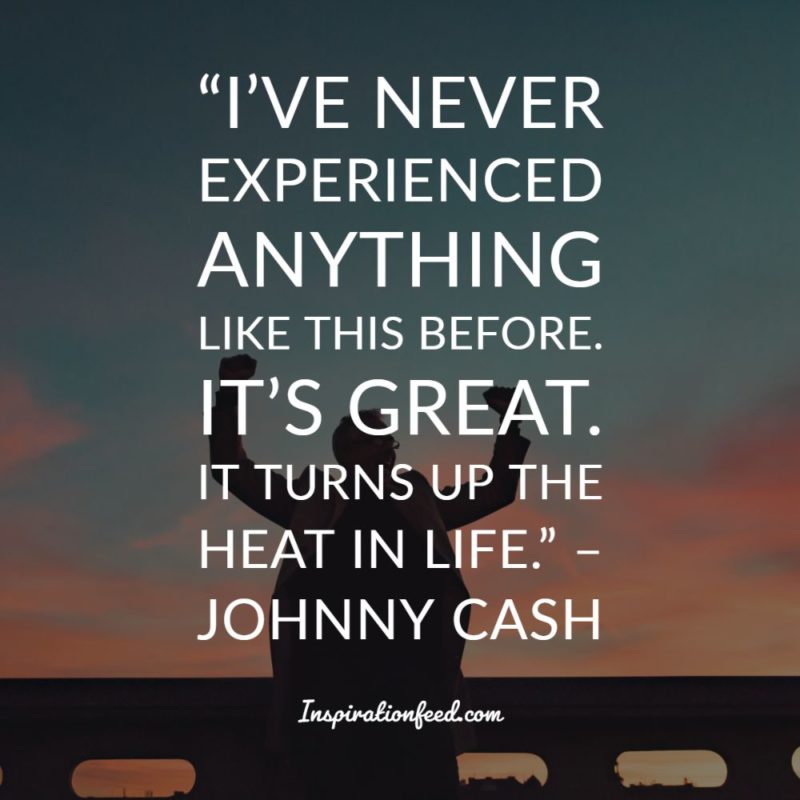 “It’s still my symbol of rebellion — against a stagnant status quo, against our hypocritical houses of God, against people whose minds are closed to others’ ideas.” – Johnny Cash

“I don’t have Paul’s calling – I’m not out there being all things to all men to win them for Christ – but sometimes I can be a signpost.” – Johnny Cash “The only really frightening thing about Cinnamon Hill belongs in the realm of the living and serves to remind me that some of them – just a few of them, a tiny minority-are much more dangerous than all the dead put together.” – Johnny Cash

“Sometimes I can sow a seed. And post-hole diggers and seed sowers are mighty important in the building of the Kingdom.” – Johnny Cash 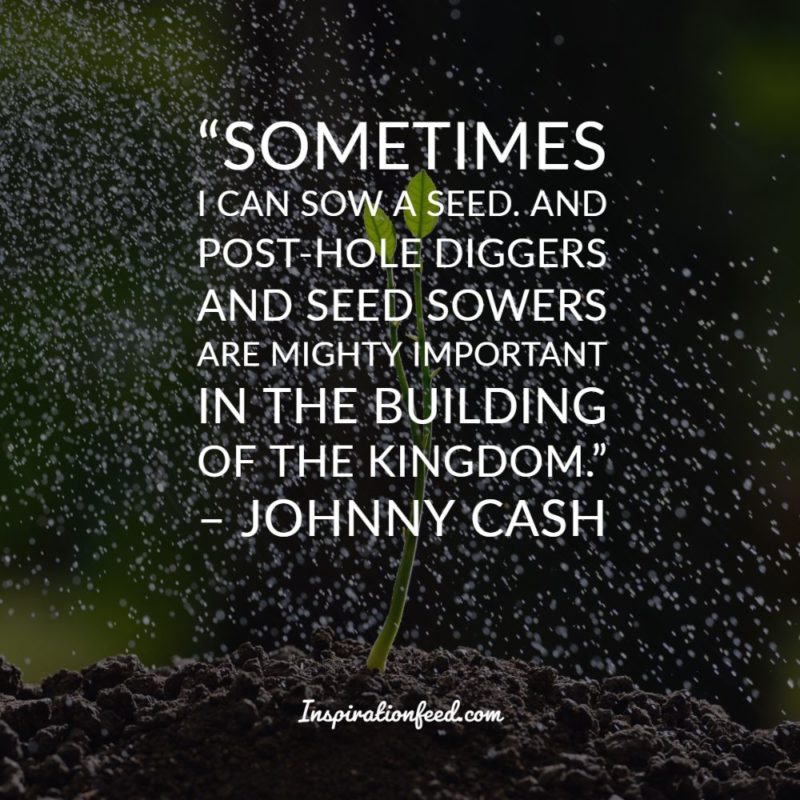 “My children love me, but they don’t understand. And I got a woman who knows her man. Drive on, don’t mean nothin’, drive on” – Johnny Cash

“Well you may throw your rock and hide your hand. Workin’ in the dark against your fellow man. But as sure as God made black and white, what’s down in the dark will be brought to the light” – Johnny Cash 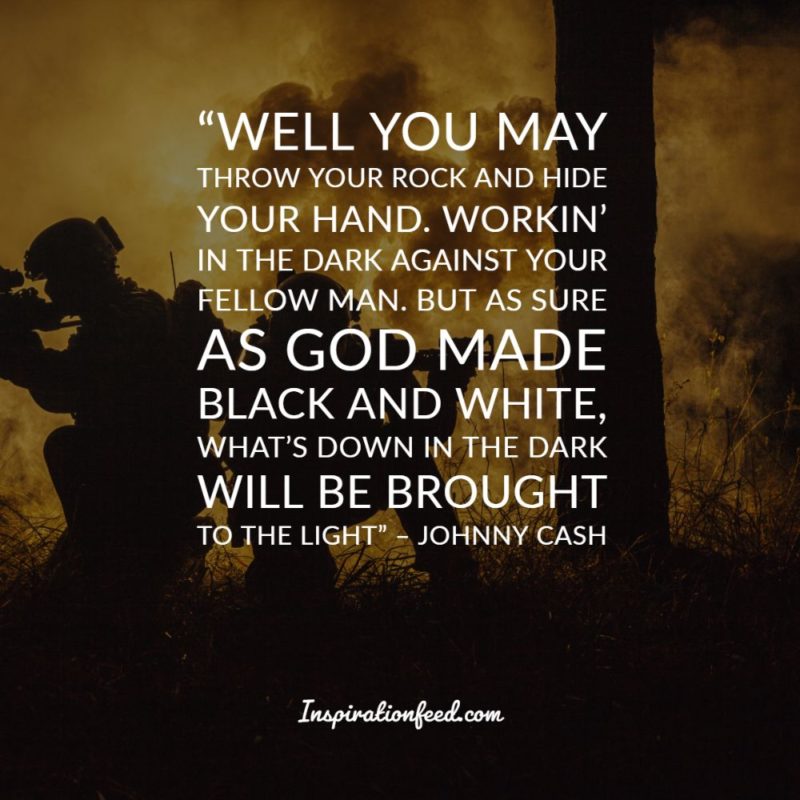 “The beast in me is caged by frail and fragile bars.” – Johnny Cash

“Well, I’d love to wear a rainbow everyday, and tell the world that everything’s okay. But I’ll try to carry off a little darkness on my back. ‘Til things are brighter, I’m the man in black.” – Johnny Cash 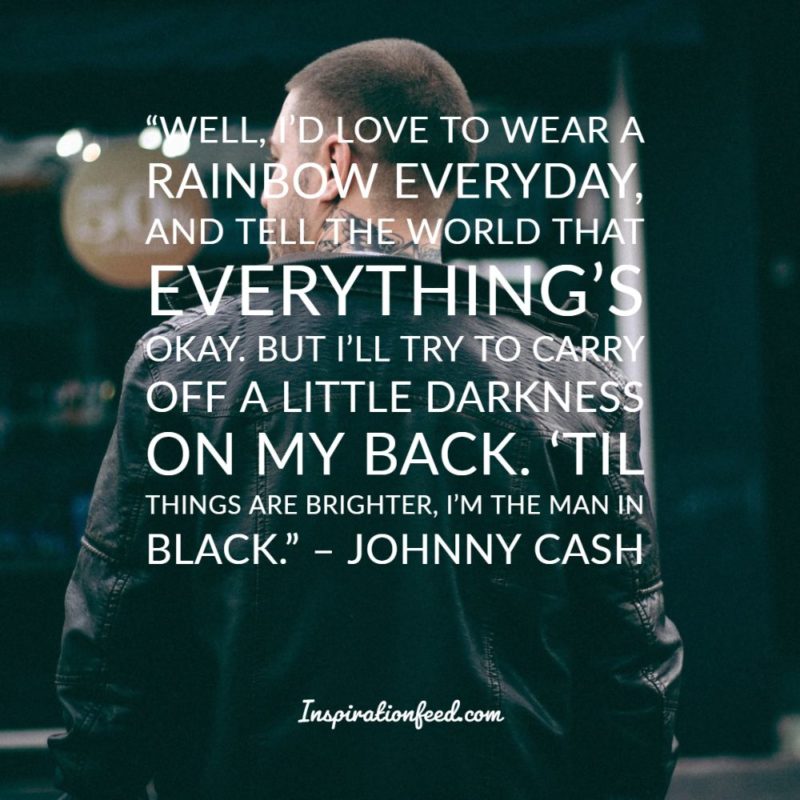 “That he would pause in his killing to go about the business of preparing for the living knowing that he will immediately return to the business of killing?” – Johnny Cash

“Beneath the stains of time the feeling disappears, you are someone else I am still right here.” – Johnny Cash

“To be a good man, to try to live my life the way God would have me, to turn it over to Him that His will might be worked in my life, to do my work without looking back, to give it all I’ve got, and to take pride in my work as an honest performer.” – Johnny Cash 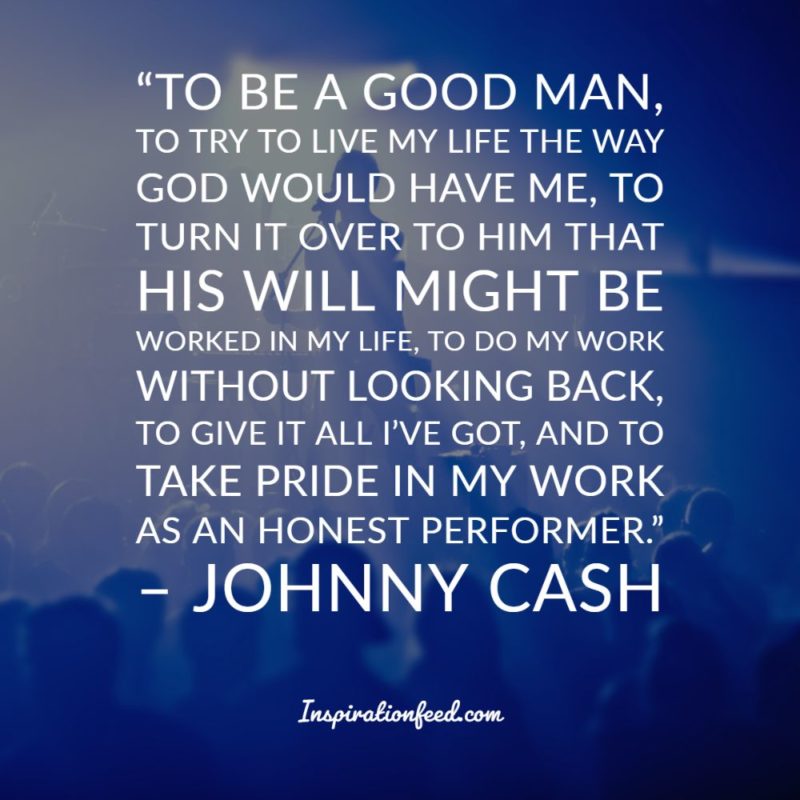 “I shot a man in Reno just to watch him die.” – Johnny Cash

“Of emotions, of love, of breakup, of love and hate and death and dying, mama, apple pie, and the whole thing. It covers a lot of territory, country music does.” – Johnny Cash 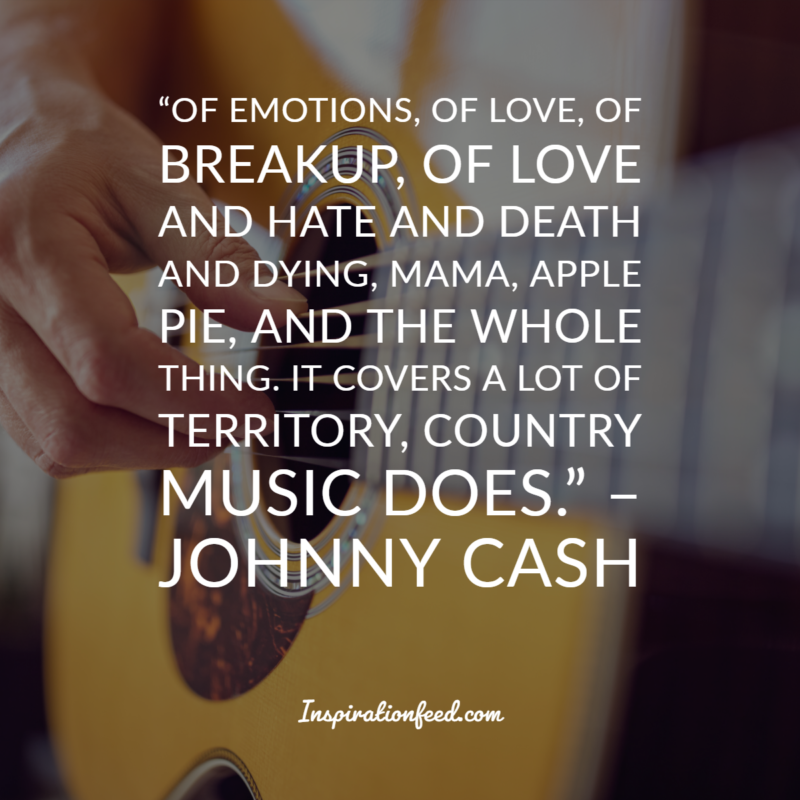 “People call me wild. Not really though, I’m not. I guess I’ve never been normal, not what you call establishment.” – Johnny Cash

“For you I know I’d even try to turn the tide.” – Johnny Cash 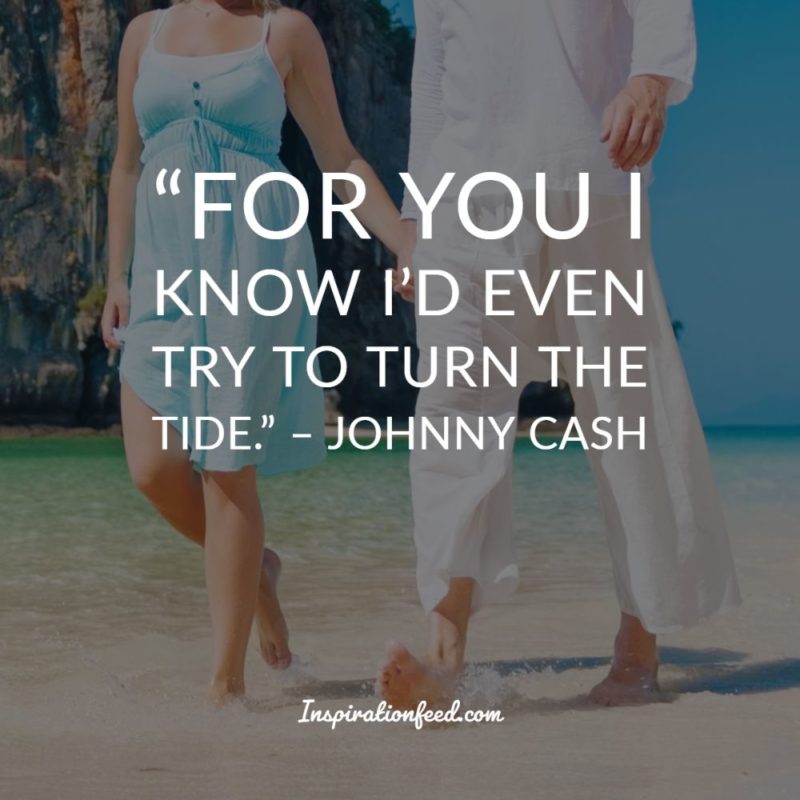 “It’s good to know who hates you, and it’s good to be hated by the right people.” – Johnny Cash

“Truth, said the Master, cannot be hid. But he didn’t say slap it in the face of my kids.” – Johnny Cash 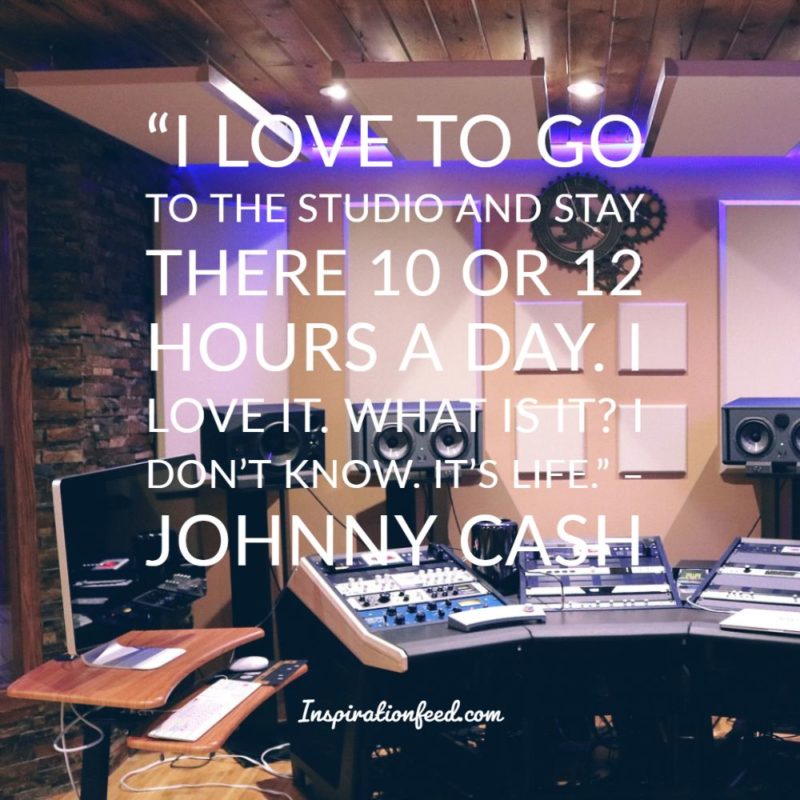 “Sometimes I am two people. Johnny is the nice one. Cash causes all the trouble. They fight.” – Johnny Cash

“How well I have learned that there is no fence to sit on between heaven and hell. There is a deep, wide gulf, a chasm, and in that chasm is no place for any man.” – Johnny Cash 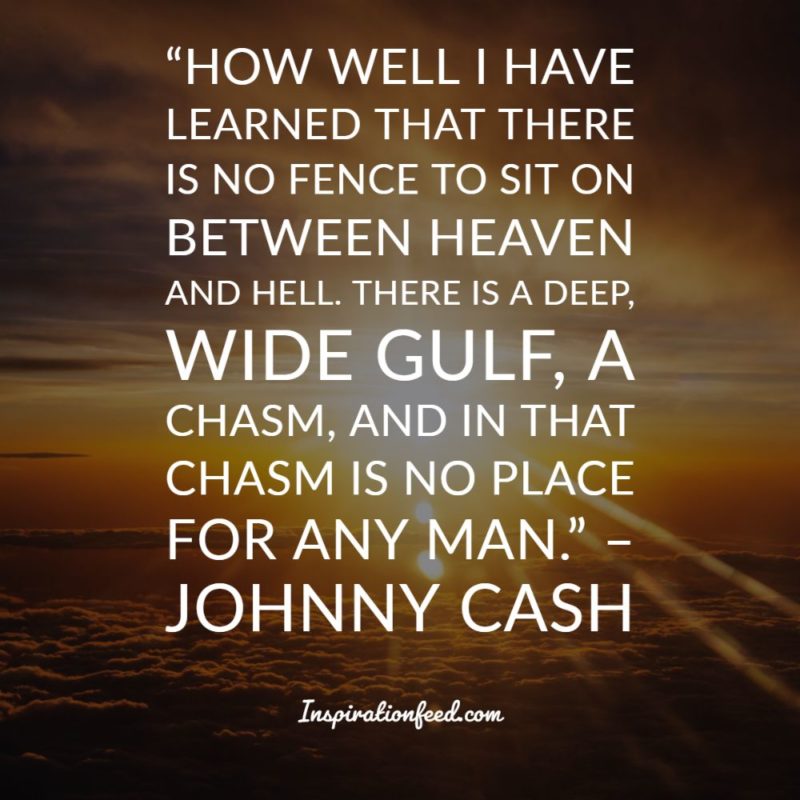