Who Is JoJo Siwa?

As a dancer, JoJo Siwa became famous after appearing on the show Abby’s Ultimate Dance Competition, where she appeared alongside her mother, Jessalynn Siwa. Her popularity increased exponentially following her appearances on Dance Moms.

But while Siwa’s rise to the limelight was mostly due to her dancing talents, she achieved real success after launching her YouTube channel. As of 2020, her YouTube channel had racked up 3.3 billion views and 12 million subscribers.

Siwa’s efforts haven’t gone unnoticed either, as she is the recipient of multiple awards, including:

JoJo Siwa was born on May 19, 2003, in Omaha, Nebraska, to Tom Siwa and Jessalynn Siwa. Her father is a chiropractor, whereas her mother is a professional dance instructor.

JoJo Siwa kicked off her dancing career by finishing as a top-5 finalist on the second season of Abby’s Ultimate Dance Competition. She was the youngest contestant in the show. Soon after, she began to appear on Dance Moms.

In May 2016, Siwa officially launched her music career by releasing the song Boomerang. The video to Boomerang has received over 900 million views as well as more than 2.5 million likes.

Following the success of Boomerang, Vivid Seats recognized Siwa as the Breakout Artist of the Year in 2018. The same year, Siwa announced that she would embark on her first concert tour titled D.R.E.A.M. The Tour. The tour, which would officially kick off on May 17, 2019, in Phoenix, Arizona, was scheduled to cover numerous locations in 52 cities across the US, Canada, UK, and Australia.

Other popular tracks by JoJo Siwa include Kid in a Candy Store, Hold the Drama, Every Girl’s a Super Girl, and High Top Shoes. All of her songs are available on her YouTube channel.

JoJo Siwa has also dabbled in acting. She made her film debut in 2018 by playing Victoria in the movie Blurt! The following year, she voiced Jay and Kira in The Angry Birds Movie 2.

As of July 1, 2021, JoJo Siwa had a net worth of $17 million. Siwa has earned her millions from numerous endeavors, including singing, dancing, acting, modeling, vlogging, writing, and endorsement deals.

Siwa is also an astute investor and has launched several lucrative businesses. One of her most notable business ventures is a line of bows released in 2016, known as JoJo’s Bows. JoJo’s bows are sold at a fashion-accessory company targeting 6-12-year-old girls, called Claire’s.

Some unconfirmed reports claim that JoJo has sold over 40 million bow ribbons to date. If these reports are true, then she definitely commands a net worth way higher than $17 million. That’s especially considering the huge popularity her bows continue to garner in the US and UK, and that a single bow cost between £8 and £12 in the UK alone.

In 2017, JoJo Siwa partnered with J.C Penney to release several products, including bedroom décor and a doll designed in her likeness.

As an author, JoJo has released numerous books targeted at young children, including:

1. It’s never too early to begin

Although she is only 17 years old, JoJo Siwa has achieved a level of fame and fortune that many people won’t accomplish in ten lifetimes.

2. Have a defining symbol

Siwa is famous among her fans for her bows, which characterize most of her music videos. According to her, the bows symbolize power, confidence, and believing-ness.

JoJo Siwa is a dancer, singer, model, vlogger, actress, and author…all rolled up into one. It appears that she understands one of the cardinal rules for success – income diversification. 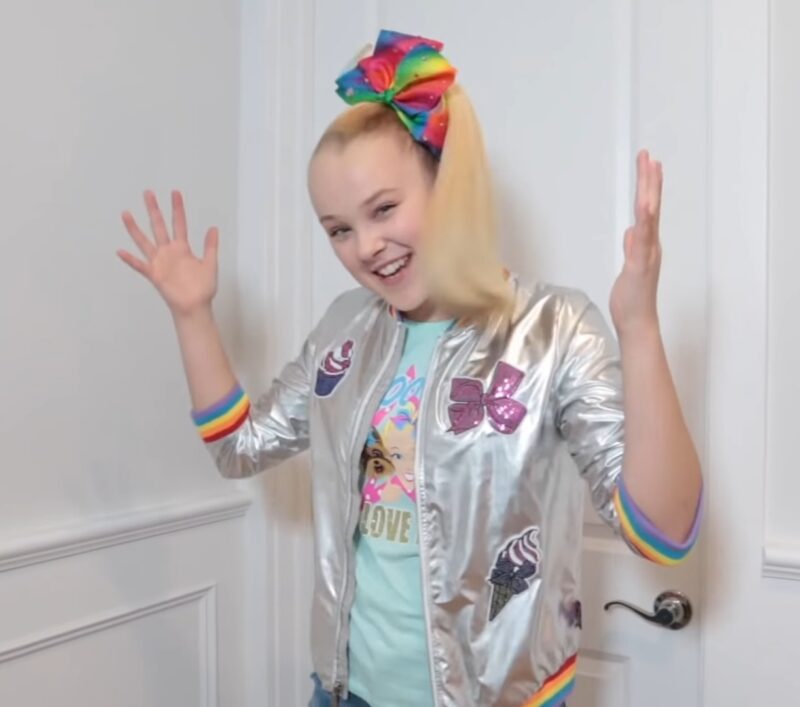 “I wake up saying every day’s another chance to rock it.”

“Nothings ever perfect that’s part of all the fun.”

“Something’s going to happen and I think it’s really big.”

“We do it better when we’re together.”

“Won’t let the haters get their way. I’mma come back like a boomerang.”

JoJo Siwa may be only seventeen years old. But she has already earned herself a spot among the world’s most influential vloggers and dancers. And with so many years ahead of her, there’s no limit to how much fame and fortune she’ll amass if she can only maintain her form.