Who Are Jonathan And Drew Scott?

The Scott brothers are best known for starring in the television series, the Property Brothers, as well as the show’s spin-offs like ‘Brother Vs. Brother,’ ‘Buying and Selling,’ and ‘Property Brothers: At Home.’ The Property Brothers program, which is produced by Cineflix Media, stars Jonathan as the contractor and Drew as the realtor.

Besides running the Property Brothers television and home improvement franchise together, Jonathan and Drew have also pursued other careers either jointly or independently. 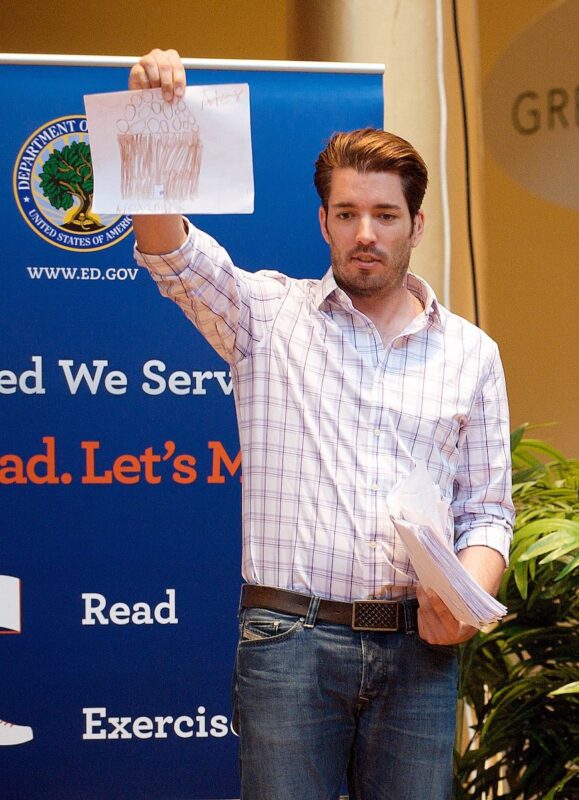 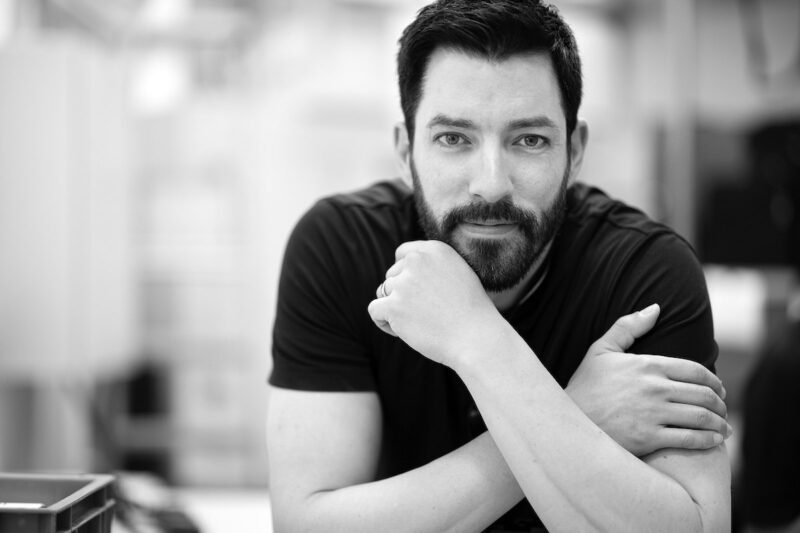 Jonathan and Drew Scott were born on April 28, 1978, in Vancouver, British Columbia, Canada, to Jim Scott and Joanne Scott. Jonathan was born four minutes before Drew.

At the age of seven, Jonathan and Drew Scott’s father, Jim Scott, encouraged the twin brothers to get jobs. The two brothers looked for jobs through various ‘help wanted’ ads but were unsuccessful. They subsequently started a business called JAM, in conjunction with their mother Joanne. JAM is an acronym for Jon, Andrew, and Mom. The business dealt in making nylon-wrapped clothes hangers, which the twin brothers would sell from door to door.

Jonathan and Drew Scott continued looking for real jobs while running their business. The twin brothers eventually stumbled upon an ad recruiting child clowns and decided to give it a shot. After completing classes with various recreation parks, Jonathan and Drew were hired for the job. They initially made C$10 per gig but eventually earned as much as $100 per hour.

Inspired by his experience as a child clown, Jonathan Drew decided to pursue a full-time career as a performer. By the age of ten, he could already create his own magical props. To further his career as an illusionist, Jonathan began studying the definitive volumes of ‘Tarbell Course in Magic.’ He also consulted and befriended various professional illusionists, such as Shawn Farquhar and David Wilson. He ultimately joined established illusionist foundations, such as the International Brotherhood of Magicians and the Vancouver Magic Circle, through which he honed his magician skills even further. By the age of 16, Jonathan Scott was already an award-winning illusionist.

Drew Scott also leveraged his experience as a child clown to venture into the acting industry. Drew started acting in theater as well as improv and sketch comedy from a fairly young age. But as Jonathan began to gravitate towards magic, Drew opted to focus on playing basketball and acting. He landed roles in major television shows, including Breaker High, Smallville, and Madison.

Jonathan and Drew Scott developed an interest in real estate after watching their father renovate their family properties. As early as eight years, the twin brothers would help their dad build and repair decks, barns, and fences, usually at a fee. The Scott brothers were also known for rearranging furniture in their family home even when they were still children.

After graduating from high school, Jonathan and Drew Scott attended the University of Calgary, where they pursued a business management course. Despite their shared interests in the entertainment industry, the twin brothers opted to pursue a program in business and not entertainment.

During their first semester in college, Jonathan and Drew made a $250 down payment for a 7-bedroom property located across the street, using a vendor take-back mortgage. After cleaning and repairing the property, the twins sublet the remaining five rooms for a monthly profit of $800. They sold the house a year later for a profit of $50,000 profit.

After flipping homes for several years, Jonathan and Drew eventually acquired their realtor licenses and founded their own real estate company known as Scott Real Estate Inc.
In 2006, Drew moved to Vancouver
to pursue an acting career. Later that year, he opened up a branch of Scott Real Estate in Vancouver. He ran the company’s Vancouver branch, whereas Jonathan remained in Calgary to take care of the company’s major operations there.

In 2008, right in the wake of the real estate market crash, Jonathan Scott began acquiring cheap properties in the United States. The same year, Jonathan and his now-ex-wife Kelsy Ully as well as older brother James Daniel, moved to Summerlin, Nevada. He opened a branch of Scott Real Estate there and started leasing properties at 80% of the market rates. Around the same time, Jonathan also began to revive his interest in pursuing a career as an illusionist.

In Vancouver, Drew Scott auditioned for a television reality show known as Realtor Idol. Although the show never saw the light of day, it gave Drew an opportunity to market their real estate company. The producers of Realtor Idol developed a show which was tentatively titled My Dream Home, before being renamed Property Brothers.

In 2010, Jonathan and Drew’s film production company Dividian Production Group was renamed Scott Brothers Entertainment. The twin brothers expanded the company into film, television, and digital production, with offices across Canada and the United States. As Dividian Production Group expanded, so did the popularity of the Property Brothers television show and property renovation business. The Property Brothers TV series spawned several spin-offs, such as Buying and Selling (2012 – present) and Brother vs. Brother (2013 – present).

In addition to their success with the Property Brothers real estate and television franchise, Jonathan and Drew Scott have also involved themselves in various other endeavors.

In 2013, the twin brothers and their elder brother James Daniel hosted the radio program ‘Off Topic with the Scott Brothers’ for Corus Entertainment in Canada. In 2016, the twins appeared on an episode of the NPR radio show, ‘Wait Wait… Don’t Tell Me!’ The twin brothers have also appeared on numerous television shows, including ‘Hell’s Kitchen’ and ‘Playing House,’ as well as their own web series ‘Tiny House Arrest.’

In 2015, Jonathan and Drew founded an outdoor furniture line known as Scott Living. The line launched on QVC, and its products have since appeared on the shelves of renowned furniture retailers like Lowe’s, Bed Bath & Beyond, Costco, and Orchard. The same year, Jonathan and Drew authored their first book, ‘Dream Home: The Property Brothers’ Ultimate Guide to Finding & Fixing Your Perfect House’. The book was released in April 2016 and debuted at #9 on The New York Times Best Seller list. The twins have since followed with two more books, including a memoir titled ‘It Takes Two: Our Story’ and an illustrated children’s book titled ‘Builder Brothers: Big Plans.’

Jonathan and Drew also dabble in music. The twins recorded two country singles as part of filming their ‘At Home on the Ranch’ reality TV series. They include “Hold On” and “Let the Night Shine In.” On January 12, 2017, the brothers released their third song, titled “My House.”

Jonathan and Drew Scott’s Net Worth 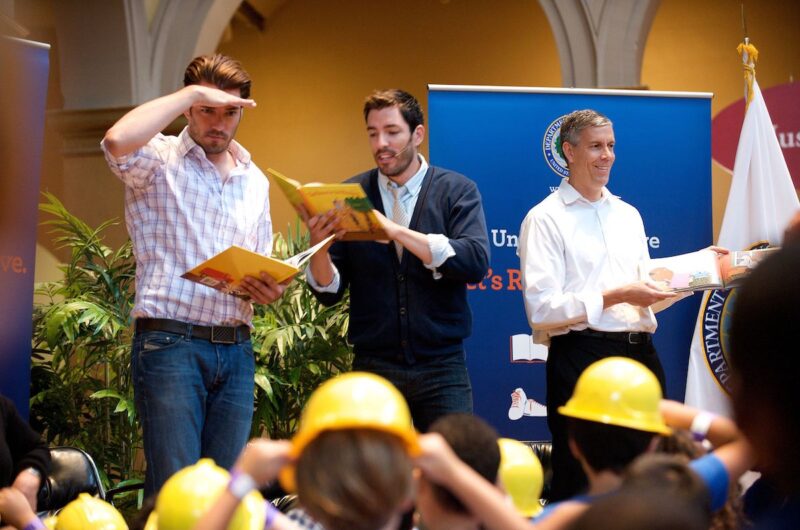 As of April 1, 2021, Jonathan and Drew Scott had a combined net worth of $200 million. The twin brothers have earned much of their wealth from their highly successful real estate and television franchise, Property Brothers.

Besides the Property Brothers franchise, Jonathan and Drew have undertaken numerous other endeavors in the real estate industry. A notable mention is their outdoor furniture line called Scott Living, released in 2015. By the end of 2016, Scott Living had generated more than $100 million in revenue.

Outside of real estate and television, Jonathan and Drew earn from acting, film production, singing, and writing. The twin brothers also draw their paychecks from speaking engagements.

Lessons from Jonathan and Drew Scott

1. When we come together, the sky is the limit

Jonathan and Drew have achieved far more than they could ever have imagined, thanks to a strong partnership they’ve fostered over the years. Well, some may argue that the Scott brothers’ fates are intertwined, seeing as they’re identical twins. But their incredible success in real estate and television is still not an achievement to be scoffed at.

2. A great investor turns every adversity into opportunity

Jonathan Scott started buying properties in the United States in the wake of the 2008 real estate market crash. Although he began by leasing his properties at 80% of the market rates, he leveraged the opportunity to market their real estate company, Scott Real Estate Inc.

3. You only grow when you move forward, not backward

In 2013, an Alberta college recruited Drew Scott to play basketball for its team. Drew was 25 years older at the time and had since abandoned his dreams of pursuing a professional basketball career. He reckoned that accepting the offer was a step backward. Therefore, he turned it down and chose to focus on their real estate business.

“As comfortable as I am being single, nothing beats sharing your happiness with someone you love” ~ Jonathan Scott

“When the economy collapsed, our construction company was in Calgary, but the U.S. was further along in the recession, so I made the move down to Vegas” ~ Jonathan Scott.

“When the economy collapsed, our construction company was in Calgary, but the U.S. was further along in the recession, so I made the move down to Vegas” ~ Jonathan Scott

“I think that’s the main thing – when people watch TV and they can see that you’re truly passionate about what you do, they can see it. They know it. And that’s what they’re drawn to” ~ Drew Scott

“It’s so important for people to have a space that they love, and that you wake up happy every morning in your house. A big part of that is what you have for your furniture, your art, your décor” ~ Drew Scott

Jonathan and Drew Scott are Canadian twin brothers who have a combined net worth of $200 million. The twins made their millions courtesy of their illustrious real estate and television careers. Jonathan and Drew have also pursued other ventures over the years, including acting, singing, and writing.