Who Is Magic Johnson?

Magic Johnson was born on August 14, 1959, in Lansing, Michigan, to Earvin Johnson Sr. and Christine Johnson. His father was a General Motors assembly worker, whereas his mother was a school janitor.

Johnson began playing basketball while attending Everett High School. After high school, he proceeded to Michigan State University where he continued to nurture his basketball talents.

In 1979, Johnson was drafted to NBA’s franchise, The Los Angeles Lakers. He played for The Lakers until 1991, where his career was cut short in the wake of a revelation that he had contracted HIV. He rejoined the club as a coach near the end of the 1993-1994 NBA season and as a player in the 1995 – 1996 season.

Determined to continue playing basketball professionally, Magic Johnson founded and played for the Magic Johnson All-Stars for the duration he was not with The Lakers. Some of his notable achievements include winning 5 NBA championships, 3 NBA Finals MVP, and 12 NBA All-Star.

Magic Johnson may have retired from basketball. But he still earns big time from his various business ventures. As of August, 1, 2021, Magic Johnson had a net worth of $600 million. He owes a significant portion of his wealth to his successful career on the court.

In addition to his basketball career (both as a player and coach), Johnson also makes money from hosting talk shows, film production, television production, and lots of lucrative business investments.

During his career as a basketball player, Magic Johnson earned nearly $50 million in salary. That includes the $25 million contract that he signed with the Lakers in 1981, as well as a few extension contracts that saw him earn even if he did not play.

Throughout his professional basketball career, Johnson also minted several millions from lucrative endorsement contracts. Some of the notable brands that he worked with include Converse and Campofrio.

The following is a highlight of Johnson’s earnings over the early years of his career:

Note that while he retired from The Lakers in 1991 and rejoined the club in 1996, Magic Johnson was still earning from the NBA side. His $14.6 million salary in 1994 and 1995 was a result of a contract that he signed which allowed him to earn even if he did not play.

Magic Johnson’s most notable real estate property is a home located in Beverly Hills that he co-owns with his wife.

Magic Johnson has involved himself in numerous entrepreneurial ventures after his retirement. He has since established a business empire known as Magic Johnson Enterprises, through which he undertakes most of his business investments. The company owns Magic Johnson Theaters, as well as a promotional marketing company and a movie studio.

Another notable business investment by the legendary basketballer is a 5% stake that he purchased in The Lakers way back in 1994. Johnson spent $10 million to acquire the stake, which he would later sell in 2010 to billionaire Patrick Soon-Shiong at an estimated cost of $50-60 million. 2010 was probably Magic Johnson’s most financially successful year in his retirement. In addition to cashing in on his 5% stake in The Lakers, Johnson also sold his Starbucks chain for $75 million.

In March 2012, Magic Johnson teamed up with a group of investors, including Guggenheim Partners CEO Mark Walter, to purchase The Los Angeles Dodgers at a cost of $2 billion. He reportedly contributed $50 million towards the deal. 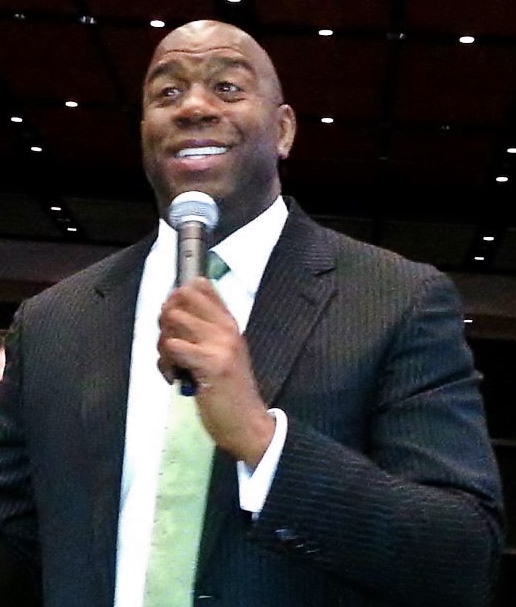 1. Keep your eyes on the prize

While attending Everett High School, Magic Johnson was repeatedly assaulted and bullied on account of his race. He held back from fights and confrontations with his white schoolmates, as he had his eyes fixed on the bigger prize.

2. Accept who you are

After testing positive for HIV, Johnson immediately went public on his status in what was seen as a prudent act of self-acceptance.

3. Apologize for your mistakes

Soon after discovering that he was HIV-positive whereas his wife and unborn child were negative, Johnson apologized for having cheated on his wife.

“All kids need is a little help, a little hope and somebody who believes in them.”

“Any guy who can maintain a positive attitude without much playing time certainly earns my respect.”

“Being able to touch so many people through my businesses and make money while doing it, is a huge blessing.”

“I tell you, it’s funny because the only time I think about HIV is when I have to take my medicine twice a day.”

Magic Johnson is unarguably one of the greatest basketball players ever to have graced the court. In him, we learn numerous valuable lessons on focus, self-acceptance, and wealth creation.