Rihanna is a Barbadian singer-songwriter, actress and businesswoman who is famous for her diverse musical style that blends various genres.

Throughout her career, Rihanna has successfully reinvented herself, embracing different personas and alter egos. She has since sold more than 250 million records, making her one of the best-selling and arguably the richest self-made musicians in the world.

Some of the awards and accolades that Rihanna has won include;

In addition to her incredible music talent, Rihanna is also one of the most inspirational figures in the music industry. She made the Time magazine’s list of the 100 most influential people in the world between 2012 and 2018. RiRi, as she’s known among a section of her fans, is also a savvy businesswoman and has launched several lucrative business ventures. 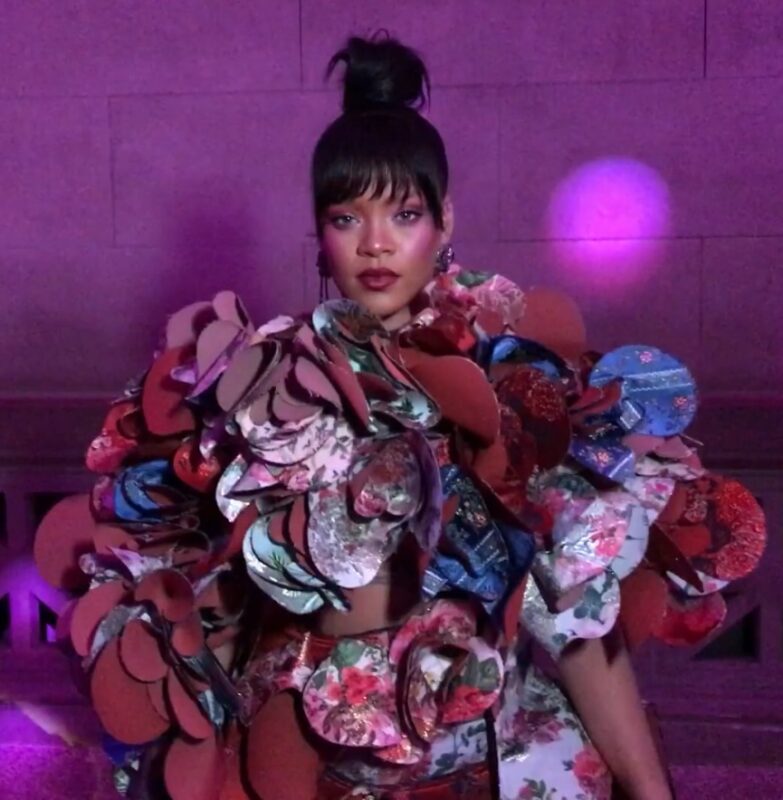 Rihanna was born on February 20, 1988 in Saint Michael, Barbados, to Ronald Fenty and Monica Fenty. Her father was an alcohol and cocaine addict, and often abused her mother physically.

The young Rihanna would intervene to break up the fights and as a result, suffered numerous concussions that led to frequent migraines during her childhood. When she was 14, her parents divorced and her health immediately began to improve.

Rihanna attended the Charles F. Broome Memorial Primary School and Combermere School. However, she chose not to graduate from high school in order to pursue her musical career.

In 2005, Rihanna moved to the US after signing with Def Jam records. She released her first single the same year, titled Music of the Sun. A year later, Rihanna released yet another sensational hit – A Girl like Me. That’s how her musical career took off. To date, Rihanna has released scores of singles, albums, and even landed roles in a couple of movies.

The following are some of the albums that Rihanna has released to date:

As of June 1, 2020, Rihanna had a net worth of $600 million. She has earned much of her wealth from album sales and successful tours. Reports indicate that Rihanna has sold more than 60 million albums as well as over 250 million records.

But while Rihanna broke onto the music scene way back in 2005, she did not earn significantly from her tours until the 2010s. The Last Girl on Earth Tour (2010–2011), which promoted her studio album Rated R, is considered as her first successful world tour.

According to Billboard, the Diamonds World Tour is unarguably Rihanna’s most successful tours as it sold out a whopping 84 out of the 87 stops made.

Like most musicians, Rihanna has also profited immensely from lucrative business partnerships and endorsement deals.

In 2015, the Pon de Replay hit maker signed a $25 million contract with Samsung. The deal saw her endorse Samsung’s Galaxy line of products as the global electronics giant sponsored her 2016 Anti World Tour.

In addition to Samsung, Rihanna has also partnered with online music streaming services like YouTube. According to statistics by Ron Nation, the singer-songwriter is the most viewed female musician on Vevo/YouTube, having garnered more than 11.8 billion views on YouTube and 21 Vevo certificates.

Billboard reports that she earned at least $7.6 million from streaming alone in 2016. That same year, Rihanna earned up to $10.1 million in royalties and $2.5 million in sales. Still on streaming services, it’s worth noting that Rihanna owns a stake in the streaming service Tidal.

Rihanna also makes big bucks from her Fenty Beauty Line, which is a joint partnership between her and the luxury goods company, LVMH. According to estimates, the brand generated about $100 million worth of revenue in the first two months of signing a partnership deal with the singer.

The brand’s total value is estimated to be somewhere between $1.5 and $2 billion and Rihanna owns a 15% stake in it. Rihanna’s investment in the fashion industry also includes her Savage X Fenty which launched in 2018. Not to mention, up to 11 fragrances that she released before launching her lingerie and makeup lines.

The following are other brands that Rihanna has entered into partnerships with:

Rihanna has also had a stint on the big screen. She has featured in films like Home, Annie, and Ocean’s 8. While it’s unclear how much she earns from her big screen gigs, it’s safe to imagine that she takes home some huge paychecks.

That’s especially considering that films she has featured on have been a commercial success. Ocean’s 8, for instance, made $41.5 million during its box office opening. 1. Anyone can make it

Rihanna is among the many musicians who comes from a broken family. As a kid, she bore the brunt of her dad’s physical abuse and suffered frequent headaches as a result of trying to break up her parent’s frequent fights. That she eventually rose from such a deprived childhood to become the big brand she is today is quite something.

Despite her desire to graduate from high school, Rihanna chose not to and instead, left high school to pursue her musical career.

3. Passion for your job will get you places

Rihanna is a passionate singer and that evidently shows whenever she takes to the stage. It’s that very passion that has kept her going since she broke onto the scene in 2005.

“Dancing was always part of my culture growing up in Barbados. When I shot my 1st video I worked really hard with my choreographer to perfect the routines.”

“I am a child but I have to think and act like a woman, this business forces you to.”

“I want to give people a taste of the Caribbean, and show them the fun side of me.”

“My mother would kill me if I posed nude! My mother raised me with certain standards.”

“People think, because we’re young, we aren’t complex, but that’s not true. We deal with life and love and broken hearts in the same way a woman a few years older might.”

Rihanna’s success in the music industry is attributed to her resilience, passion, and incredible ability to reinvent her image. Not only has she made millions out of it, she is also an idol to many aspiring musicians around the world.