Despite their fearsome reputation, sharks are incredibly adorable creatures that aren’t trying to kill us unless we cross their path at the wrong time. That’s just one of the many interesting facts about these colossal sea dwellers.

Read below for more jaw-dropping shark facts that you probably didn’t know. 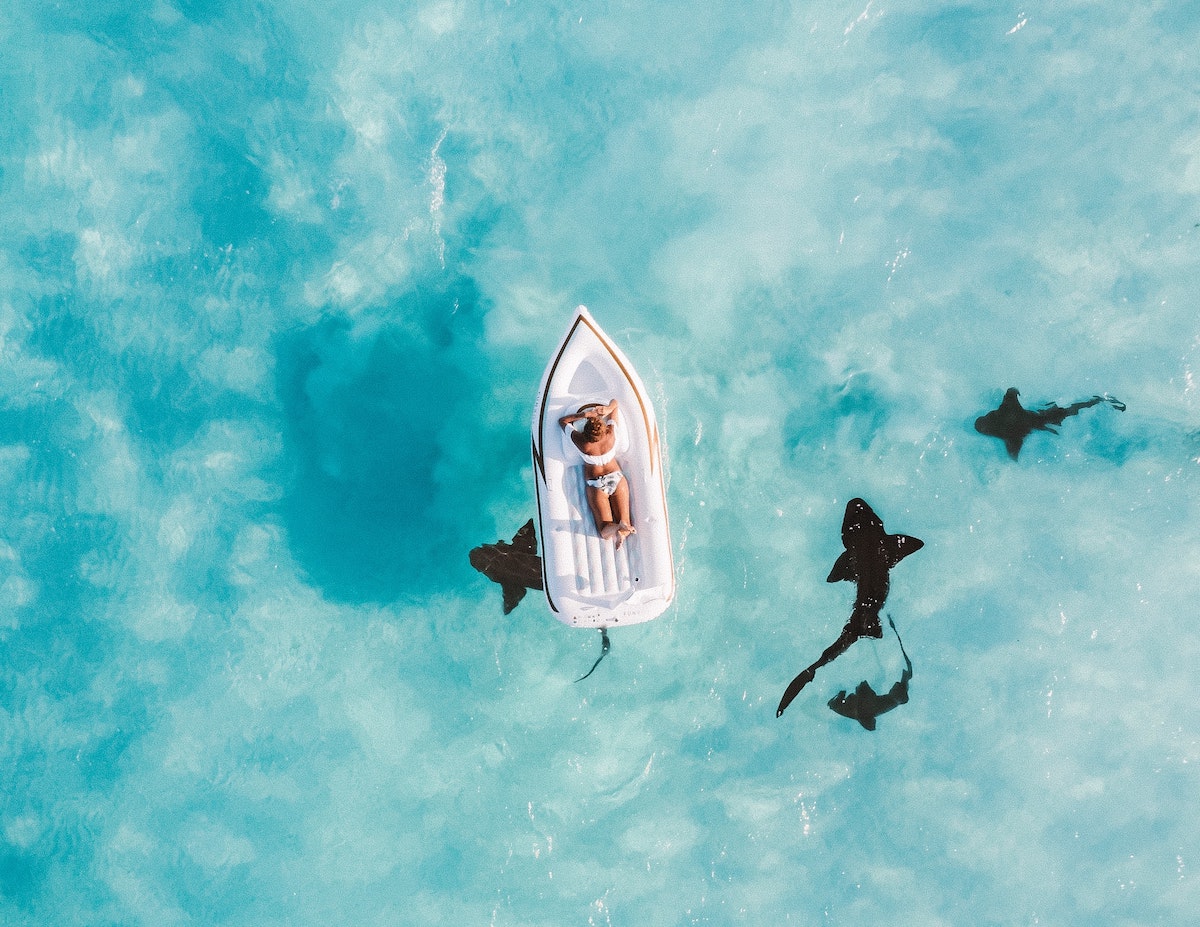 1. Sharks are fish because they live in water and breathe through gills.

2. However, many people do not consider sharks as true fish because their bodies have cartilage instead of bones.

4. Shark heads vary in size and shape. Some are small and more symmetrical while others are odd-shaped and rather frightening.

5. A shark’s body is covered in teeth-like scales called denticles, which give their bodies a sandpaper texture.

7. Fins are a shark’s most resourceful external body part as they help with motion, balance, steering, and protection.

8. Sharks have remarkably long tails, with some able to reach 3 meters.

11. The longest shark species is the whale shark.

12. The shortest shark species is the spined pygmy shark.

13. Comparatively, most sharks are intermediate in size and measure about the same length as fully-grown humans.

14. Sharks come in different weights too. The heaviest can weigh up to 5,000 pounds (2,270 kilograms) while the lightest will only weigh a few grams.

15. Expectedly, the whale shark is the heaviest shark species while the spined pygmy shark is one of the lightest of all shark species. 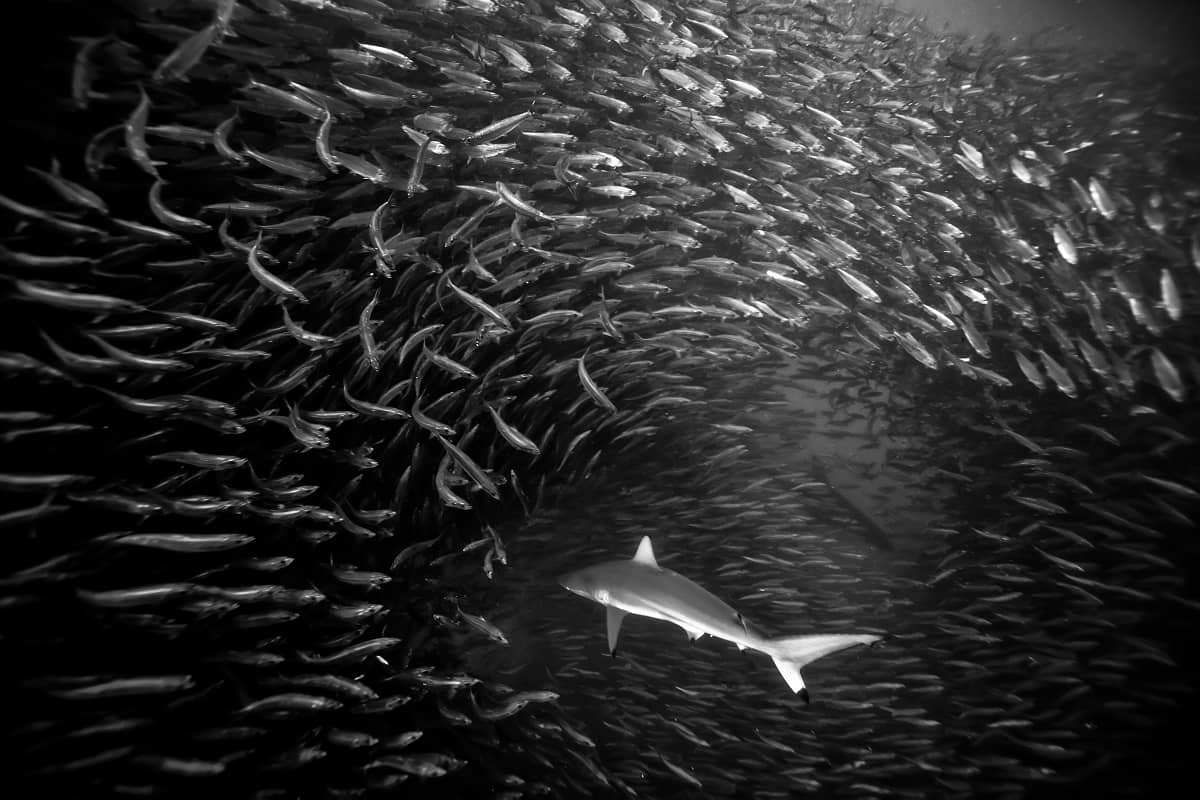 18. The origin of the word “shark” is shrouded in mystery. However, many people believe that the word derives from the Old Dutch word ‘schurk,’ which loosely translates to ‘predator,’ ‘villain,’ or ‘scoundrel.’

19. The first mention of the word “shark” with respect to the sea creature was in a 1688 work by John Wilkes.

20. Sharks have been around for over 400 million years. Scientists believe that some of the earliest sharks existed as far back as the Devonian age.

21. Scientists also believe that about ten shark families existed during the Devonian age. These families would later branch off to become the numerous shark species we know today.

22. Sharks have survived five major planet extinction events. The last of these events happened around 65 million years ago and led to the extinction of dinosaurs.

23. Many sharks haven’t changed their fundamental features for over 150 million years. For instance, the broadnose sevengill sharks can be traced back 190 million years.

24. The Cladoselache is among the earliest known shark species. These fish measure 1.2 meters in length.

25. The Megalodon shark was the largest shark predator. It measured 12 – 21 meters long and has been extinct for over 2.6 million years.

26. Another famous extinct shark was the Stethacanthus. This shark lived 345 to 280 million years ago and was noted for its flat, scale-covered fins.

28. Sharks and humans belong in the same kingdom – Kingdom Animalia.

29. Sharks belong in the phylum chordata, a taxonomic unit whose members have backbones.

30. Sharks are found in the class chondrichthyes, whose members mainly include jawed fish with cartilaginous skeletons. Other members of this group include rays, skates, and chimaeras.

31. Sharks are further grouped into the subclass elasmobranchii. Members of this group have no swim bladders, rigid dorsal fins, and five to seven pairs of gill clefts that open independently to the fish’s exterior.

34. There are at least 50 different shark genera.

35. Researchers have since identified over 400 different shark species. 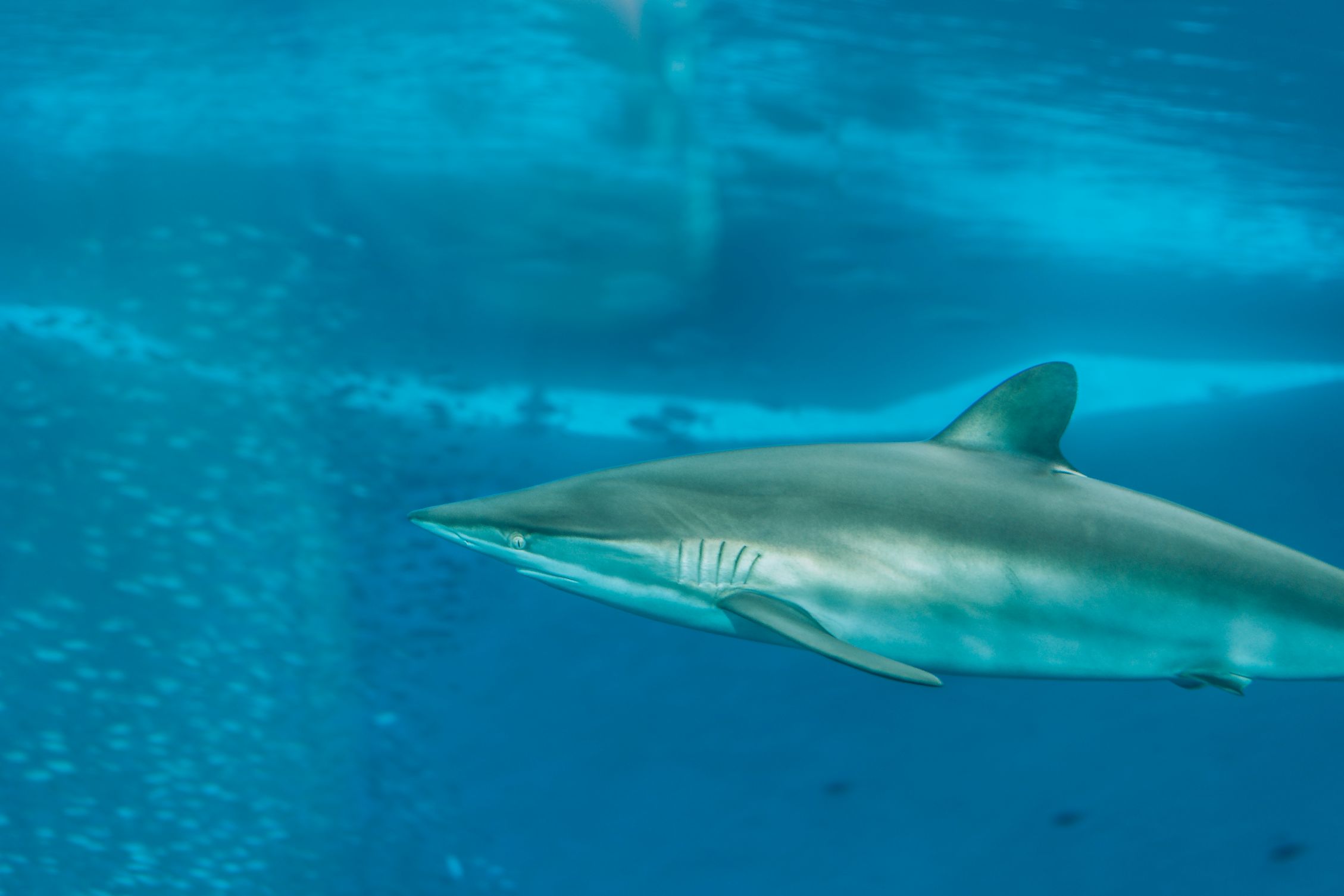 36. Sharks are saltwater fishes. That explains why they mostly inhabit seas and oceans.

37. Sharks aren’t adapted for freshwater due to their rather high internal salt levels, which would become diluted when exposed to freshwater.

38. Besides dehydrating sharks, freshwater would also dull their senses and impair their buoyancy.

39. However, certain shark species like the bull shark have incredible physiological adaptations that make them able to live in fresh water.

40. There are at least one billion sharks in the world. That’s one shark for every 7 – 8 humans.

41. Blue sharks are among the most common and widespread shark species.

43. Most sharks live in the USA and Australian oceans.

44. The Arctic and Antarctic regions have the least number of sharks.

45. Sharks generally prefer warmer to colder temperatures. That explains their small number in the Arctic and Antarctic regions.

46. However, sharks are cold-blooded creatures whose internal body temperature self-adjusts to match the external water around them.

47. Sharks are APEX predators that sit at the very top of the ocean food chain. These sea monsters directly impact all the other marine species underneath them and play a key role in maintaining balance in the ecosystem.

48. As apex predators, sharks eat virtually any sea creature that they can get in their jaws. These range from regular fish to dolphins, small whales, sea lions, and even other sharks. Smaller shark species prefer smaller prey like crabs, clams, squids, lobsters, and mollusks.

49. Most sharks are inherently carnivores. However, recent studies indicate that the whale shark might be Earth’s largest omnivore.

50. Sharks are highly cannibalistic animals who won’t mind turning on their own, especially when their regular prey are in short supply.

51. Sharks are scavengers too. These animals won’t go on the hunt when there’s a smell of carrion nearby.

53. Sharks can go two – three days, sometimes up to weeks, without a meal. That’s because they’re cold-blooded, hence do not burn energy as fast as warm-blooded animals do.

54. Sharks hunt by first sensing their prey (using their elaborate senses of smell) and then ambushing them.

55. Most sharks are also athletic hunters. They’ll leap completely out of the water as they ambush their prey from below.

56. Sharks are generally solitary hunters. They prefer to hunt and eat alone.

57. However, some shark species love to hunt in groups, ostensibly to increase their odds of catching prey. A noteworthy mention is the sevengill shark.

58. Sharks generally don’t chew their food. Instead, they prefer to swallow it whole, bones and all.

60. Although sharks are the oceans’ apex predator, many smaller shark species are prey to other marine dwellers. Common animals that eat sharks include orcas, otters, seals, sea lions, larger fish, other shark, and sperm whales.

61. Like most animals, humans are a shark’s biggest threat. 63. Shark teeth are continuously replaceable. One shark may have as many as 50,000 teeth in its lifetime.

64. Certain shark species, such as the captive lemon, can lose their teeth every week.

65. Sharks have incredibly powerful jaws. Using a jaw power meter known technically as gnathodynamometer, scientists have been able to record the shark’s maximum force applied to a single tooth as 132 pounds. That’s the equivalent of a tooth-tip pressure of 42,674 pounds per square inch.

66. Shark’s upper and lower jaws move independent of each other. That’s because they’re not attached to the skull.

67. Sharks have excellent vision among most fishes due to the presence of both rods and cones in their eyes. Most sharks can see objects clearly from 30 yards (27.4 meters) away in clear water.

68. A shark’s eyes are located on almost entirely different sides of its head, giving the animal nearly 360 degrees field of view.

69. A shark’s eyes contain tapetum lucidum, a feature that makes their eyes illuminate in dim conditions while also giving them better night vision than humans.

72. Unlike most fishes, sharks can close their eyes.

73. Sharks have a third eyelid known as a nictitating membrane, which shuts to protect their vulnerable eyes while attacking prey or swimming through marine forests and coral caves.

74. Sharks have an incredible sense of smell. These animals can smell their prey from up to 1/3 miles or 534 meters away. That includes human blood.

75. However, a shark’s sense of smell has been specially adapted to pick up the scents typically emitted by the animal’s prey, including the smell of blood, live fish, and carrion. That means a shark may not detect the smell of things like detergent or fragrances from a rather close distance.

76. Sharks have an acute sense of hearing and can pick up low-frequency signals emitted by the sound of potential prey splashing against the waters.

77. A shark’s sense of hearing is amplified by the Ampullae of Lorenzini. The ampullae of Lorenzini are skin pores spread throughout the shark’s head and body, which are particularly sensitive to electrical fields. They can help a shark hone in on prey by detecting the electrical fields generated by it. They can also help a shark detect imminent current changes and decide whether to migrate or not.

78. Sharks use their nostrils only for smelling. For breathing, these animals rely on their gills. 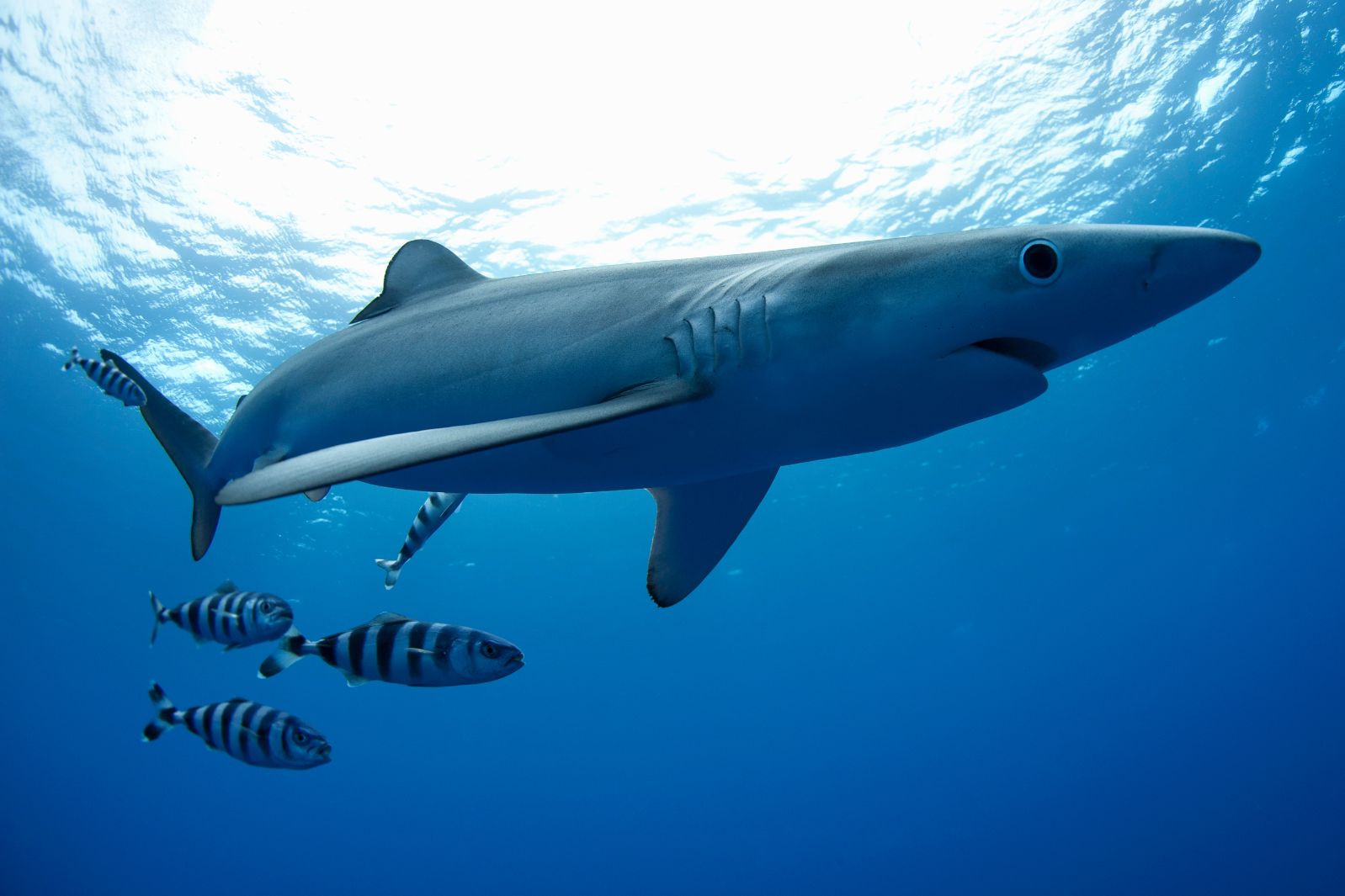 79. Sharks do not sleep like humans do. They simply have active and restful moments.

80. Contrary to popular belief, not all sharks must keep swimming to be able to breathe. Certain species like the nurse shark can easily breathe while submerged.

81. Sharks have terrible buoyancy due to the absence of air bladders.

83. Most sharks that attack humans mostly do so defensively and not out of thirst for human blood.

85. Only about 6 to 8 human fatalities are attributed to shark attacks annually. For comparison, humans kill at least 100 million sharks over the same period.

86. Sharks can lay eggs or give birth to their live young. They can also hatch their eggs before laying them. With such diversity in reproduction, it’s not surprising that sharks are one of the most abundant sea creatures.

87. Female sharks can give birth without contact from males. This phenomenon is known as asexual reproduction and it occurs when a female shark’s eggs are fertilized by an adjacent cell called  a polar body.

90. The ABC reality investment series “Shark Tank” was named based on the aggressive nature of the sharks (investors) in the series.

We hope you’ve learnt a thing or two about sharks that you previously didn’t know.

After all is said and done, remember that sharks are apex predators with a powerful drive for blood. So, you don’t want to be caught in their path while they’re on the prowl.