Sleepover parties, also known as slumber parties, are a growing trend among teenagers, particularly millennials. These parties are an exciting occasion for your kids to spend quality time with their friends as they catch up on life. The parties also offer parents a rare opportunity to come face to face with the type of friends their children keep.

But as a parent, you may not always stay up late to keep an eye on everything your children do during slumber parties to ensure they don’t get up to any mischief. All the same, you want them to have a great time sharing hilarious jokes while indulging in all the junk food in the house, at least this once.

Fortunately, you can still play an active part in your children’s sleepover parties by recommending to them some amazing games to play as they while the night away. In this post, we highlight 15 most exciting games to line up for your children’s next sleep over party.

Not only are these games kid-friendly, adults can enjoy them too. So, if ever you have some time to spare, feel free to join in and play a game or two before retiring to bed. Just remember to drop the ‘parent’ tag for a while and play by your children’s rules. 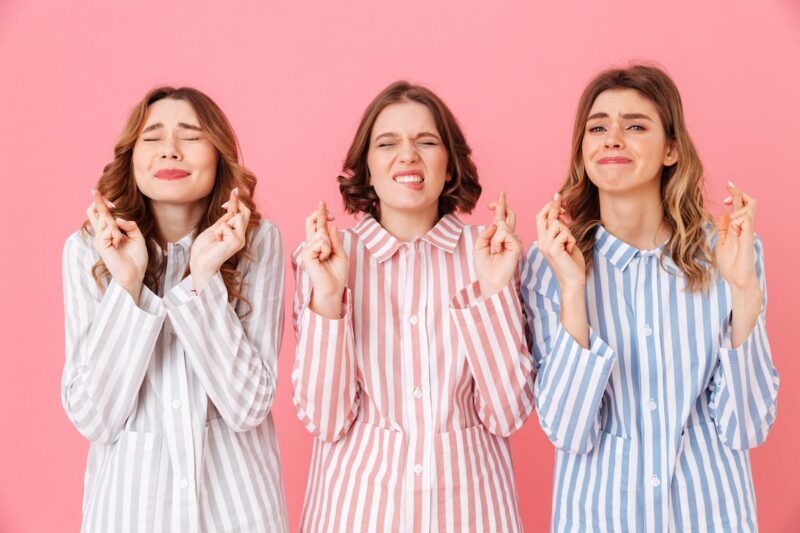 Truth or Dare is a classic party game that needs no introduction. It also happens to be an excellent game to line up for your kids’ next slumber party.

In this game, children take turns to ask a series of questions. The other kids are expected to give the correct answer to each question asked. For every wrong answer, the respondent (s) must perform a specific dare.

You can make this game exciting for your children by coming up with a customized list of kid-friendly questions.

Examples of truths include:

Examples of dares include:

• Walk to the door and back blindfolded.
• Peck everyone in the room.
• Shout at the top of your voice.
• Sit still for ten minutes without moving a muscle.
• Don’t blink for the next five minutes.

Two Truths and a Lie is an exciting variation of the Truth and Dare game.

Children take turns making three statements. Two of those statements are true, whereas one is a lie. Everyone else must figure out the two truths and the one lie.

To make this game exciting, ensure the three statements are as closely related as possible. For instance, the player can choose to focus solely on pets, cars, school as opposed to mixing different topics. 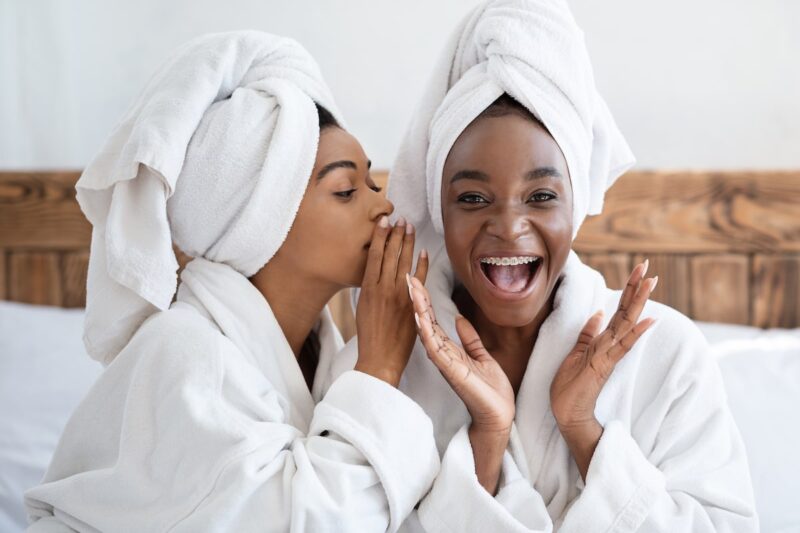 We all have that one thing we’re most afraid of. Whether it’s spiders, snakes, flying, or being in public places.

In Phobia Test, participants take turns mentioning 5 common things people fear. The child who can come up with the most popular list wins the game.

If you’re hosting a sleepover party for kids between the ages of 2 and 4 years, then Prize Walk is a game you should seriously consider.

Begin by writing numbers from 1 to 30 on square charts. Next, stick the numbers on the ground within a circle. Create smaller chits containing the same numbers and shuffle them up in a basket.

Now, play some music and have the kids walk around the circle. The idea is for them to stand on a number whenever the music stops. If that number is picked up from the basket, the kid wins a prize. This is probably one of the easiest (yet still most exciting) slumber game to play.

The last person to get the message announces it to the group, with the punch line being the errors that arise as the message is passed across.

Would You Rather is a fun sleepover party game where participants must choose between two challenging (and usually uncomfortable) scenarios.

Examples of ‘Would You Rather’ questions include:

A great way to make this slumber party game even more exciting is by asking the respondents to explain their answers.

7. Never Have I Ever 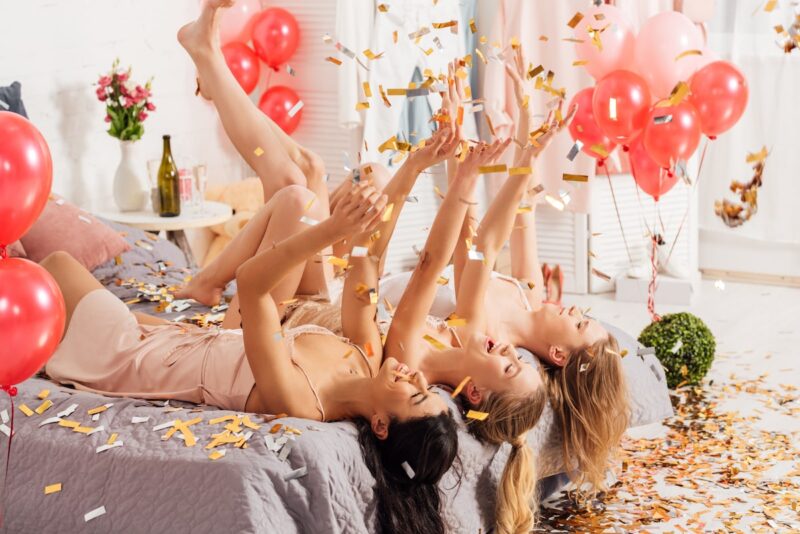 Never Have I Ever is great slumber party game to play for kids that wish to learn about the quirkiest things that their friends have done before.

The first child begins by making a simple statement concerning something that they’ve never done before. The statement should start with the phrase ‘Never have I ever…’ At any point during the game, anyone who has ever done the mentioned action must perform a dare, usually drinking.

Ideally, Never Have I Ever is played in pubs where the punch line would be taking a sip of actual beer. But since you want the game to be kid-friendly, ensure you replace beer with healthier drinks like fruit juice, milk, or water.

The following are examples of Never Have I Ever statements to get your kids started:

Although generally consider a girls’ game, your teenage boys can also have fun playing the Blind Make-over Game.

Start by rounding up basic make-up supplies, such as eyeliner, mascara, lipstick, blush, and foundation. The make-up supplies are placed in the center at the start of each game.

Then, one child has to blindfold themselves and apply make-up to the kid next to them. The second child blindfolds themselves and does the same to their neighbor and the chain continues until everyone is wearing a make-up. Lastly, the blinds are taken off. The winner is either the child who applied the cutest make-up or the funniest-looking kid. 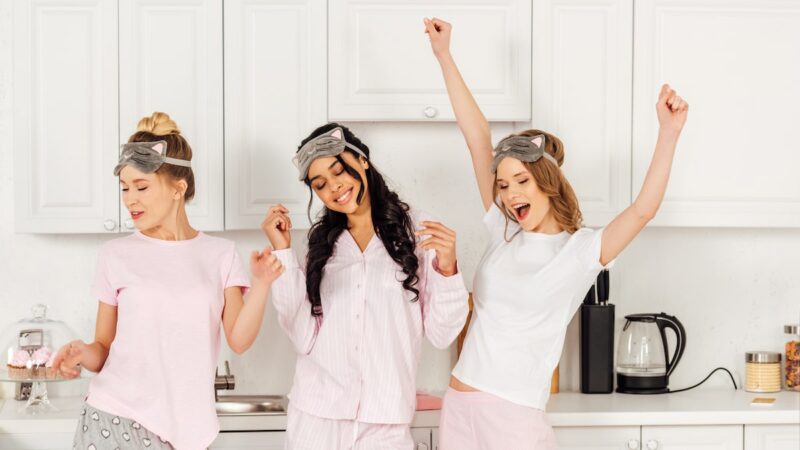 Children sit around a board containing a large, unwrapped chocolate bar. The kids take turns rolling a dice.

The idea is to have the first child who rolls 6 put on a hat, scarf, and gloves, then cut and eat from the chocolate bar.

As this happens, the other kids continue rolling their dices until the next person who rolls 6 replaces the current chocolate eater.

Sleepover parties may turn out to be a perfect opportunity for your teenagers to hone their culinary skills.

Come up with a new recipe and split the children into cooking groups. The group that can prepare the most sumptuous meal according to the recipe is the ultimate winner. Of course, everyone gets to indulge their taste buds in the end. 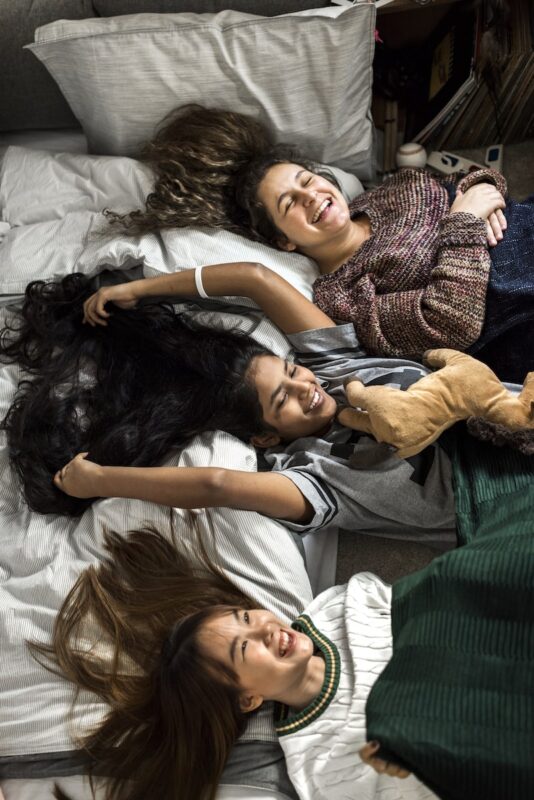 Twenty Questions is a popular game played on dates. But you can also line it up for your children’s next sleepover party.

In this game, one person is selected to be the answerer, with everyone else being a questioner. The answerer then chooses an object that remains secret.

The questioners take turns asking a cumulative total of 20 questions that can only be answered by a simple “yes” or “no.” “Maybe” may also be an acceptable answer provided that the answerer doesn’t lie.

Questions are normally in the following form:

• Is it heavier than a loaf of bread?
• Is it lighter than feather?
• Is it sweeter than chocolate?

Related  15 Fun Texting Games and How to Play Them

Who Knows Me Better is a fun slumber game to help gauge how much kids know about themselves. Children take turns asking a series of questions touching on their personal interests. Everyone else is expected to respond with an accurate answer.

Common ‘Who Knows Me Better’ questions include: 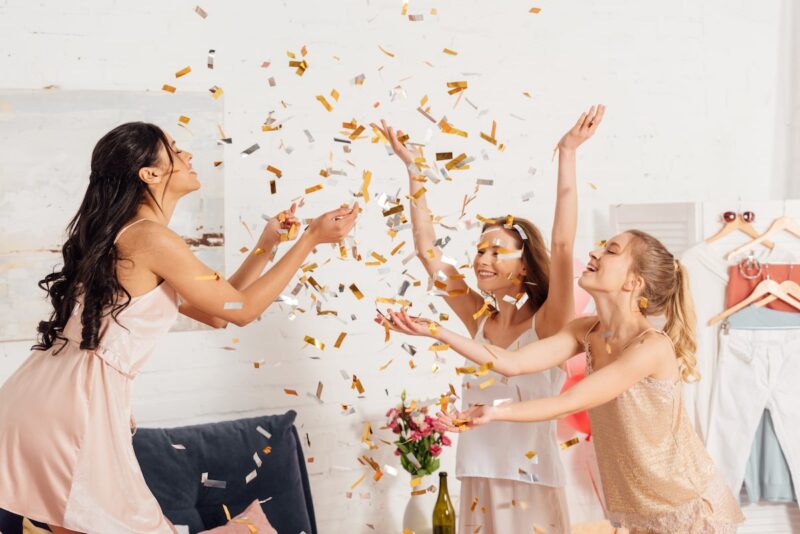 Sardines is similar to the classic game of “Hide and Seek.” But in this game, one person hides and everyone else goes seeking.

Whenever a hunter finds the hider, the hunter must join in and hide with them, leaving the other seekers to continue with the search. The last person to discover the rest of the group becomes the hider in the next round.

Every teenager with a social media profile will love this cool slumber party game.

To play the game, one child begins by setting a timer on their phone’s camera. Then, the camera is passed around the rest of the players.

Whenever a child gets the phone, they must pause and pretend to be taking a selfie. However, the last person holding the cellphone when the timer goes off must take an actual selfie. 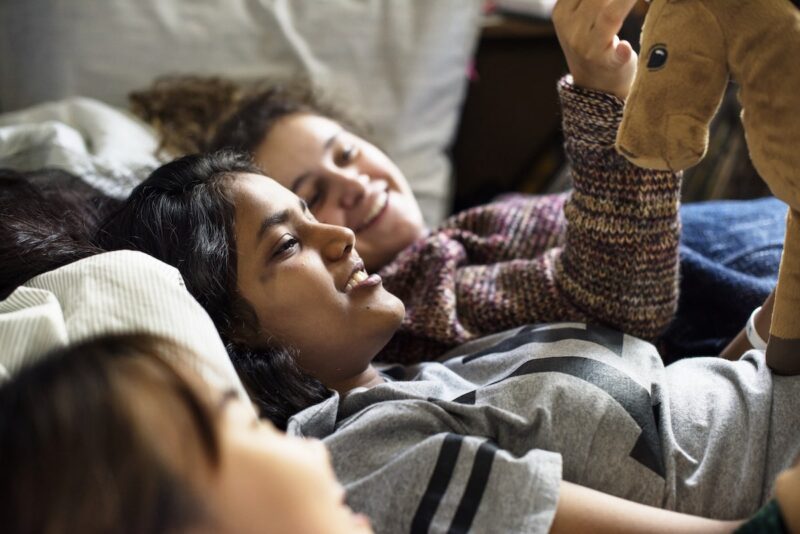 This game is best played around a campfire.

The players start by choosing one of them, known as the Godfather. Next, all players close their eyes except for the Godfather, who goes tapping on the other children’s shoulders.

The Godfather must also “assassinate” other players by secretly winking at them one at a time. As soon as a child is winked at, the child must slump over and pretend to be dead. However, the round comes to an end if anyone witnesses the assassin winking and immediately says “he’s the winker!”

Always involve your kids when planning a sleepover party game for them. Let them play an active role in selecting the games and if possible, play the games with them beforehand.

If, for any reason, your children don’t like a certain slumber game, strike the game off the list and come up with other suggestions.