Who Is Stephanie Beatriz?

Stephanie Beatriz Bischoff Alvizuri is an Argentine-American actress and model who’s best known for her portrayal of Detective Rosa Diaz in the NBC comedy series Brooklyn Nine-Nine. She is also famous for her role as Jessica in the independent drama Short Term 12 (2013).

Stephanie Beatriz Bischoff Alvizuri was born on February 10, 1981 in Neuquén, Neuquén Province, Argentina. Not much is known about her parents’ names and identities, except that her father is a Colombian while her mother is a Bolivian.

Beatriz attended Clear Brook High School in Webster, Texas. She later proceeded to Stephens College in Missouri, graduating from the institution in 2002.

After graduating from college, Stephanie Beatriz moved to New York City to pursue her acting ambitions. She eventually relocated to Los Angeles, where she has been living since 2010.

Beatriz kicked off her acting career by accepting minor roles in numerous movies and television series. She appeared in an episode of the television series ‘The Closer’ in 2009, as well as in the television film ‘The Smart One’ in 2012. She also made several stage appearances during the same period, including appearances at the Oregon Shakespeare Festival, The Old Globe Theatre, Theatreworks USA, and Yale Repertory Theatre.

In 2013, Stephanie Beatriz began portraying Sonia in the ABC comedy series, ‘Modern Family.’ She appeared in the series until 2019, making a total of 4 episodes. The same year, Beatrice joined the cast of ‘Brooklyn Nine-Nine,’ portraying Detective Rosa Diaz in the NBC action-comedy series. She was considered one of the series’ most iconic stars during its eight seasons.

In 2018, Stephanie Beatrice appeared as a guest diner in the ‘Hell’s Kitchen’ episode “Fish Out of Water.” The same year, she appeared as Candy in the film ‘Half Magic.’

In 2019, Beatriz voiced the character General Sweet Mayhem in the film The Lego Movie 2: The Second Part. She also appeared in the television series ‘One Day at a Time’ and ‘Into the Dark,’ in addition to voicing Connelly in the series ‘Twelve Forever.’

Other major films and television series that Stephanie Beatriz has graced in the recent past include: 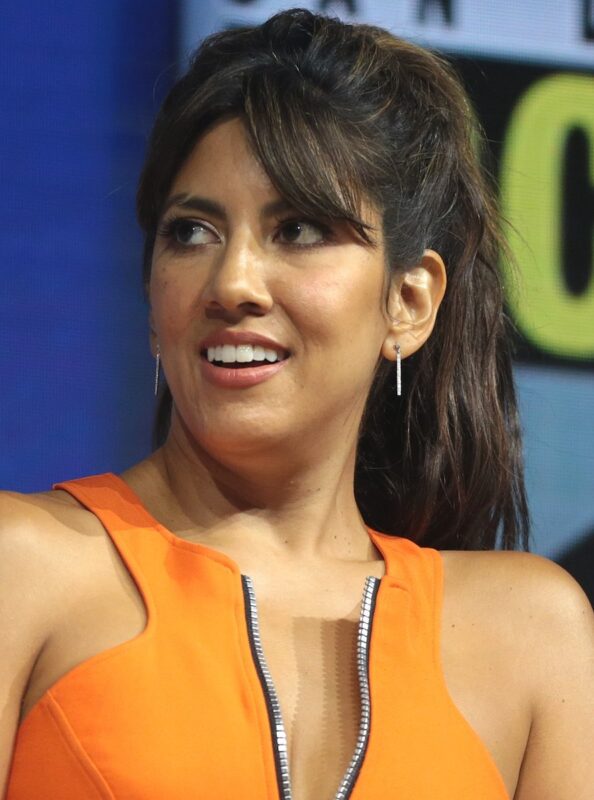 As you might have guessed, Beatriz has earned the bulk of her wealth from her illustrious acting career. The ‘Brooklyn Nine-Nine’ star has acted and lent her voice to numerous acclaimed movies and television series.

Besides acting, modeling and film directing have also contributed to Stephanie’s $2 million net worth. Beatriz’s most notable directorial role was in the ‘Brooklyn Nine-Nine’ season 6 episode titled “He Said, She Said.”

Stephanie Beatriz broke into the cinematic limelight in 2009. She has consistently appeared in movies and television programs since then.

2. Take pride in your identity

Beatriz discovered that she was bisexual around the age of 12. Despite being victimized by her family and friends on account of her sexual orientation, that didn’t stop her from coming out in June 2016.

3. Use your influence to champion the rights of the less-privileged

Stephanie Beatriz is an influential celebrity of Hispanic origin. She has leveraged that status to advocate for the rights of detained immigrants. Beatriz undertakes most of her advocacy programs through Immigrant Families Together, an organization that helps in linking detained immigrants with their families.

• I do a lot of laughing at my own self in life, so I think I come at things with a pretty easygoing view.
• I do think that, as an advocate for myself on set, I’m very direct.
• I think most actors like to do things that are right outside of their comfort zone.
• It’s hard to make friends as an adult. You gotta work at it, you know? You have to ask people to lunch, and if you don’t know them, it’s weird.
• You can’t live in fear all the time.

Stephanie Beatriz is an accomplished actress who has commanded the spotlight for over ten years.

Beatriz has appeared in a number of acclaimed movies and television shows, earning a cumulative net worth of $2 million from her various cinematic engagements.