Wartime propaganda was embodied in many visually striking forms; yet in particular, the pickings to be had going through the covers and advertisements of comic books are rich indeed. WWII propaganda machine took the sparkle of the ‘The Golden Age of Comics’ and pounced upon it, using nearly every superhero as part of an ideal ‘pro-US’ platform.

The drive to contribute to war bonds was particularly fierce in the comic book industry, and given the natural patriotic slant many heroes had, the two became eager bedfellows. Soon (in comic books at least) ‘Winning the war’ went hand in hand with good defeating evil, always getting the girl and upholding Truth, Justice and the American way. 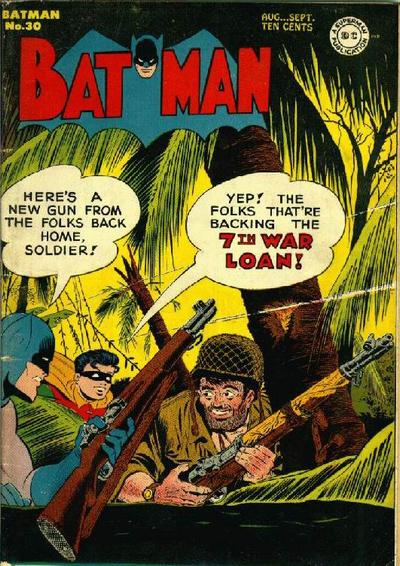 Many of the comics contained racist depictions hand in hand with extreme jingoes that would certainly not be tolerated today. Often, it was deemed expedient for the Superheroes to abandon their poignant heroic qualities. For example, Batman as we know him never kills, and never uses guns. However in Batman #15 (1943), Batman appears on the cover firing a Gatling gun, alongside the quote “Keep Those Bullets Flying…

Keep on buying war bonds and stamps”. Batman was then seen on various other covers holding guns, firing guns and handing over guns to troops in the under growth. A page in ‘World’s Finest #39’ sees Batman sat in his home with his pistols proudly mounted behind glass on the wall behind him, which is a little odd given his ethical commitments. 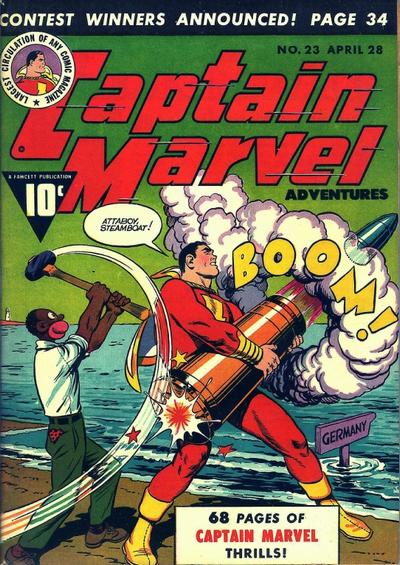 Action Comics issue number 58 exploded with ‘Slap a Jap’, this rather euphonious yet explicitly racist comment appeared next to Superman and some highly offensive caricatures. Despite being involved in war, the distorted views of various cultures and race were continually sprawled across covers. Another that sticks out is Captain Marvel Adventures Number 23; the cover depicts the superhero holding an oversized cartridge ready to let loose over Germany. However the ignition of the bullet is performed by what can only be described as the most racist and unnecessary (and possibly surrealist – his lips are actually the size of his fists) caricature of a black man.

Another comic (‘World’s Finest Comics’ issue 8) saw Batman and Robin accompanied by Superman; emblazoned across the cover underneath a sign that read ‘Sink the Japanazis.’ For some reason, Superman’s writers were most fond of the term ‘Japanazis’ (appearing multiple times over the years). This united front that these superheroes had with the war effort all too often took a darker undertone.Unfortunately such incidents were typical rather than exceptional.

Timely Comics’ Captain America was one of the worst offenders. This advertisement was a patriotic creation cleverly used to entice children to spend less on comics, and instead send the money to Captain America and the war effort. Quotes in this ad such as the genocidal ‘REMEMBER: Your dime could buy the bullet that kills the last Jap’, were used without trace of irony.

These timely classic comics twisted various cultures and nations’ views, causing many of the all-war-all-the-time heroes to fade into obscurity once the war ended. Supersnipe #9 (the series lasted until 1949) pictures a young boy simply dressed in a Supersnipe costume in front of a mirror. In the reflection, the ‘real’ Supersnipe is suspending Adolf Hitler by his knees ready to thrust a large sharp sword into his rear. This kind of exposure to those young boys during wartime must have consumed their heads with possibilities of what they could reasonably be done to the ‘bad guys’ (since the heroes were doing it).

Thank goodness the Goddamn Batman and his like tend to confine themselves to fiction, and be a little more chilled out these days!

We hope you enjoyed article. We would love to hear your opinion and feedback, so please don’t hesitate to comment below. For more inspirational articles please don’t forget to subscribe to the RSS-feed and follow Inspirationfeed on Twitter + Facebook! If you enjoyed the following article we humbly ask you to comment, and help us spread the word!