Who Is Trevor Noah?

Trevor Noah is a South African comedian, television show host and producer, actor, writer, and political commentator who is the current host of the American satirical news program ‘The Daily Show’ aired on Comedy Central.

Noah gained initial recognition in 2002 following a small appearance on an episode of the South African soap opera Isidingo. He became increasingly famous after accepting several hosting gigs with the South African Broadcasting Corporation (SABC). In 2008, he became the runner-up in the 4th season of South Africa’s iteration of Strictly Come Dancing.

Trevor Noah was born on February 20, 1984, in Johannesburg, South Africa, to Robert Noah and Patricia Nombuyiselo Noah. At the time of his birth, interracial relationships were criminalized under the discriminative apartheid law. So, Noah’s father, who was considered white, could not legally marry his mother, who was considered black.

In 1992, Noah’s mother married Ngisaveni Abel Shingange, with whom she had two sons and Noah’s half-brothers Andrew and Isaac. However, Patricia divorced Shingange in 1996 on the grounds of physical abuse. In 2009, Patricia made headlines when her ex-husband Shingange shot her in the head and leg after she married Sfiso Khoza. She miraculously survived the ordeal, and Shingange was convicted in 2011 to three years of correctional supervision.

Trevor Noah launched his acting career in 2002 by accepting a small role on an episode in the soap opera Isidingo. He later went on to host his own radio show known as Noah’s Ark on YFM. At some point, Noah decided to shift his focus from acting and show hosting to comedy.

In 2004, Trevor Noah went back to show hosting. He hosted an educational television program known as Run the Adventure, which aired on SABC 2 from 2004 to 2006.

In 2007, Noah hosted a gossip-themed show on SABC 1 titled The Real Goboza and a sports show on SABC known as Siyadlala. The following year, he hosted a dating game show known as The Amazing Date and also became a contestant in the fourth series of Strictly Come Dancing, emerging the runner-up.

Trevor Noah hosted a series of other television shows over the next few years, including:

On September 28, 2015, Trevor Noah succeeded Jon Stewart as the host of The Daily Show. His contract with the show runs through 2022.

Noah has also involved himself in numerous other television shows while producing and hosting The Daily Show, including:

Noah is also an acclaimed author. He published his first book in 2016 titled Born a Crime: Stories from a South African Childhood and his second book in 2018 titled The Donald J. Trump Presidential Twitter Library.

Trevor Noah has a net worth of $100 million as of March 1, 2021. Noah has earned his millions from his highly-successful career in comedy, show hosting, television production, and acting.

The Daily Show accounts for the vast majority of Noah’s hosting-related earnings. During his first few years hosting the show, Trevor was paid between $5 million and $8 million. In September 2017, Noah signed an extension deal that would see him earn an annual salary of $16 million from the show.

Besides comedy, television hosting, and production, Trevor Noah also earns from book royalties. His first book, Born a Crime, became a #1 New York Times Bestseller. The book was also named one of the most insightful books of the year by numerous organizations, including the New York Times, Esquire, NPR, Newsday, and Booklist. Plans are currently underway to produce a film adaptation of the book, which will star actress Lupita Nyong’o as Noah’s mother.

Trevor Noah has also invested in a couple of real estate properties over the years. In January 2019, Noah purchased a humongous 10,044-square-feet, 2-storied mansion in the Bel-Air neighborhood of Los Angeles for $20.5 million. He sold the mansion in September 2020 for $21.5 million. Noah is also associated with a duplex in Manhattan, which he acquired in 2017 for $10.1 million, plus tons of other properties in South Africa.

1. Everything happens for a reason

Trevor Noah was born to a White father and a Black mother at a time when such arrangements were considered illegal in South Africa. That might help to explain why the subject of race features prominently in Noah’s comic performances.

Your past may have been full of pain and tears. But it makes no sense dwelling on the negative sides of it. Noah once said, “Don’t cry about your past. Life is full of pain. Let the pain sharpen you, but don’t hold on to it. Don’t be bitter.”

At some point, Trevor thought that acting and radio hosting wasn’t for him. So, he decided to venture into comedy instead. And the decision seems to have borne huge dividends. 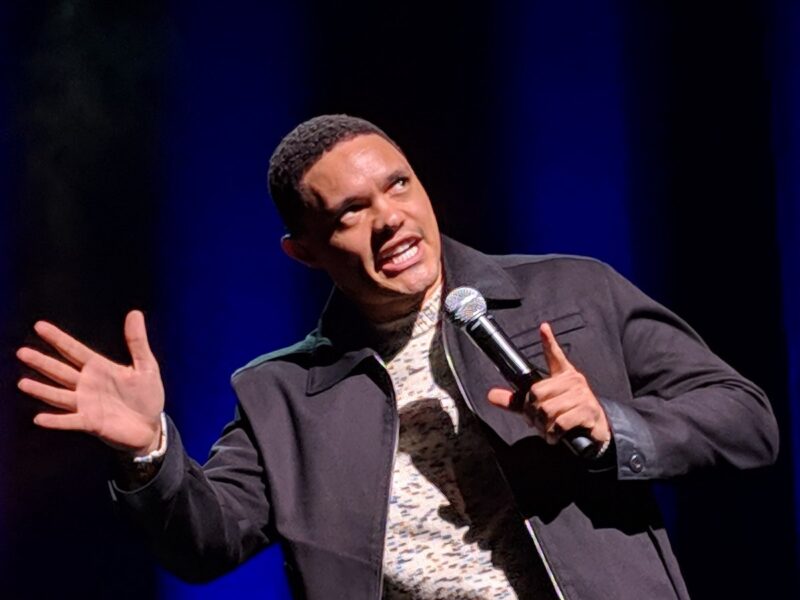 “Often, people who can do, don’t because they’re afraid of what people that can’t do will say about them doing.”

“The first thing I learned about having money was that it gives you choices. People don’t want to be rich. They want to be able to choose. The richer you are, the more choices you have. That is the freedom of money.”

“We live in a world where we don’t see the ramifications of what we do to others because we don’t live with them.”

“We spend so much time being afraid of failure, afraid of rejection. But regret is the thing we should fear most.”

“You’ll have a few bruises and they’ll remind you of what happened and that’s okay. But after a while, the bruises fade and they fade for a reason. Because now, it’s time to get up to some s**t again.”

Trevor Noah is a South African comedian, television host, and actor who has performed in numerous comic shows and is the current host of The Daily Show. Noah is also an author and investor. His current net worth stands at USD 100 million.