In response to the Trump-Trudeau trade dispute, Twitter is thanking Canada. As Trump looks to slap tariffs on Canadian good, US Twitter users are using the hashtag.

Who started the trade dispute?

On June 1st, the US president announced he was seeking to impose tariffs on Canadian goods. This has led to a war of words on both sides. Proposed tariffs would affect the automotive and dairy industries. Both of which are vital to the Canadian economy.

Donald Trump has also hinted at placing tariffs on EU goods. In particular, on the importing of non-US steel. This has prompted a souring of US relations. Unsurprisingly EU members have taken Canada’s side. Both the EU and Canada are now looking at counter tariffs.

Despite the G7 Summit being held in Canada, tensions are still rife. After leaving the summit, President Trump took to Twitter to vent his frustrations. To his millions of Twitter followers, Trump called Justin Trudeau “very dishonest and weak”. 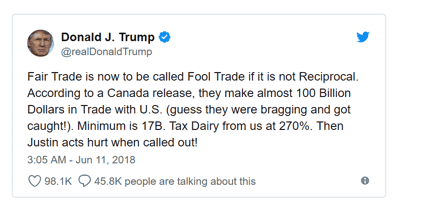 Currently, President Trump is in Singapore meeting Kim Jong Un. It is unclear if he will make further comments when he returns.

Where did #ThankCanada come from?

From his extensive tirade, Donald Trump has put Canada in the spotlight. After attacking both Justin Trudeau and Canada, Twitter came to their defense. By early Monday, hashtags #ThanksCanada and #ThankCanada were trending. It appears these hashtags were started by writer David Wild.

In these tweets, people are listing all the great things Canada has given us. From Hollywood movie stars to coffee, all things Canadian are being praised.

What has Canada given us?

Situated just above the US, Canada is often overlooked. No more, thanks to the #ThankCanada hashtag. This week people all over the world are realising just how much Canada has given us.

There are many reasons for everyone to #ThankCanada. As Canada Day lands on July 1st there is no better time than now. Show Canada some love and get tweeting #ThanksCanada