Since his first unorthodox introduction to the world in The Empire Strikes Back in 1980, Yoda had become a worldwide symbol of infinite wisdom. He’s not only identified as a character in the Star Wars franchise, but an icon in the world of science fiction.

To date, Yoda is one of the most recognized – and beloved – movie characters in history.

There’s a running joke in the entertainment industry that when the character’s inimitability is greater than anything, the simplest way to avoid questions is to not give answers.

Yoda, the two-foot-tall Jedi, is one of the most important characters in the cinematic world. While everyone who “speaks” the Star Wars language knows of Yoda, no one really “dgrw”knows” the green guy.

No one really knows where he came from or from what planet he originated. Lucas felt that exploring Yoda’s history and writing it all down to make it “official” would defeat the purpose of its enigma.

The creation of Yoda was a massive risk. The making of The Empire Strikes Back was a chaotic time. It was touch-and-go if the movie would be completed at all.

Yoda’s distinctiveness was one of the many chances the production took. Yoda, an important character, was a non-human. In fact, it wasn’t even played by an actor in the traditional way.

But the production’s leap of faith was rewarded. The concept became a remarkable film reality. Over the years, he has been enshrined as one of the most beloved movie characters. Story-wise, Yoda was the most powerful Jedi in the galaxy. He was also the wisest.

Stuart Freeborn was the make-up artist who was assigned to create Yoda. During the 1221/stuart-freeborn/”creation process, he would often look in a mirror. Freeborn used his own reflection to inspire the final look of the Master Jedi.

When Freeborn started sketching and sculpting Yoda, he accentuated and exaggerated some of his own features. He used his balding scalp and his defined wrinkles and laugh lines. Freeborn also drew inspiration from his pointed chin to create the non-human character.

As per the renowned make-up artist, Yoda’s upper lip was the only part of the character that wasn’t based on his facial features. Interestingly, he used Albert Einstein‘s mouth. Freeborn removed Einstein’s famous mustache and ported the latter’s upper lip on Yoda’s face.

That move was a deliberate one. Freeborn wanted to trigger a subconscious connection between Einstein’s wisdom and the audience. Thus, making Yoda seem wise and brilliant, even before he opened his mouth to speak.

Can you imagine reading an article entitled Buffy, but it has nothing to do with the famous vampire slayer? Instead, the article is all about the most powerful Jedi Master.

Lucas originally named the non-human character as Buffy. Thankfully, Leigh Bracket, the screenwriter of The Empire Strikes Back, changed Buffy to Minch Yoda. On her final draft, she dropped “Minch” completely.

So, “Buffy” became Yoda. Rightfully so, especially when taken into account the fact that in Sanskrit, Yoda means “a warrior.”

Yoda the Master Jedi… and more

Yoda wore plenty of hats in the order of the Jedi. He managed tons of important roles too.

Yoda was the Grand Master of the Jedi High Council. He was also once the Master of the Order. During the Clone Wars, he was a Jedi General. He had proven his indispensability with his skill and talent as a warrior and tactician.

Yoda was also the master of the sword. In terms of using a lightsaber, he was one of – if not the most – skilled Jedi of all time. Also, his skills in manipulating the Force was unequaled. Only a few Jedi could fight with him on equal terms.

The green Jedi was also known for his gift in telekinesis. At one point, he lifted and carried an X-Wing.  On more than one occasion, he telekinetically made two C-9979 landing crafts clash with one another. Even the Master of Telekinesis, Darth Tyranus, was unable to defeat his gift.

Yoda also has extrasensory perception. He foresaw – in clear details – future events. He would even feel the death of an individual from all around the galaxy. He was trained to become one with the Force without losing his identity even after his death.

But most of all, Yoda was known for imparting wisdom using his unique fragmentation of the English language. Here are 40 of his best quotes: 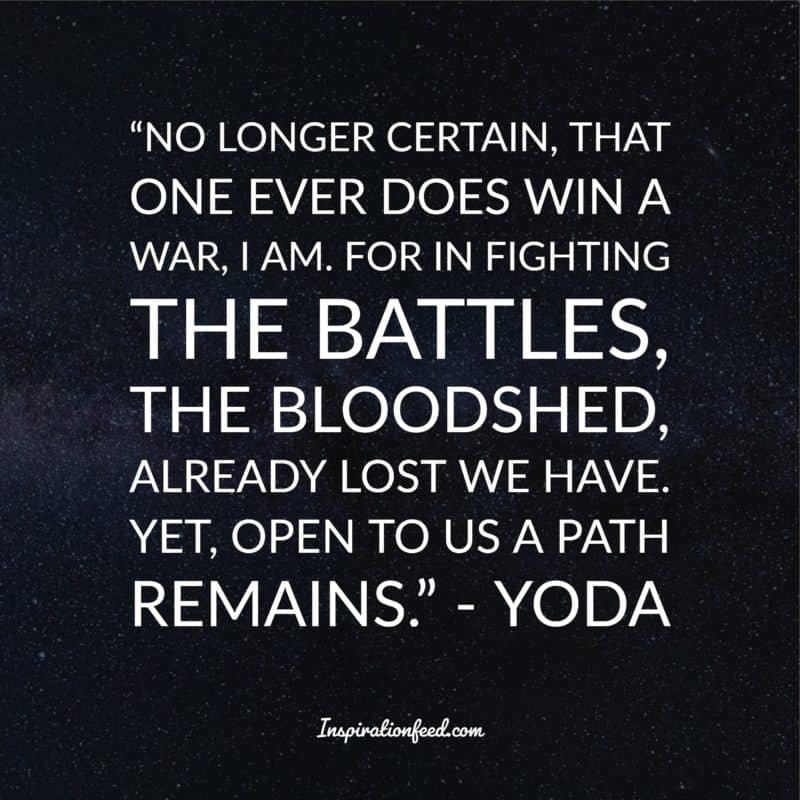 “No longer certain, that one ever does win a war, I am. For in fighting the battles, the bloodshed, already lost we have. Yet, open to us a path remains.”

“Once you start down the dark path, forever will it dominate your destiny.”

“Wrong? Hmm. A long time, fought I did. Consumed by fear, I was, though see it I did not.”

“Patience you must have my young padawan.”

“A challenge lifelong it is, not to bend fear into anger.”

“Death is a natural part of life. Rejoice for those around you who transform into the Force. Mourn them do not. Miss them do not.”

“Attachment leads to jealously. The shadow of greed, that is.”

“Faith in your new apprentice, misplaced may be. As is your faith in the dark side of the Force.”

“To answer power with power, the Jedi way this is not. In this war, a danger there is, of losing who we are.”

“Reckless he is. Matters are worse.”

“Always two there are, no more, no less. A master and an apprentice.”

“Difficult to see. Always in motion is the future…”

“I was not strong enough to defeat him. Like his master before him, be destroyed, he must.”

“Control, control, you must learn control!”

“Decide you must, how to serve them best. If you leave now, help them you could; but you would destroy all for which they have fought, and suffered.”

“On many long journeys have I gone. And waited, too, for others to return from journeys of their own. Some return; some are broken; some come back so different only their names remain.”

“Soon will I rest, yes, forever sleep. Earned it I have. Twilight is upon me, soon night must fall.”

“Save them we must. They are our last hope.”

“When nine hundred years old you reach, look as good, you will not, hm?”

“Clear your mind must be if you are to discover the real villains behind this plot.”

“Many of the truths that we cling to depend on our point of view.”

“You will find only what you bring in.”

“You think Yoda stops teaching, just because his student does not want to hear? A teacher Yoda is. Yoda teaches like drunkards drink, like killers kill.”

“Already know you that which you need.”

“And well you should not. For my ally is the Force. And a powerful ally it is. Life creates it, makes it grow. Its energy surrounds us and binds us. You must feel the Force around you. Here, between you…me…the tree…the rock…everywhere!”

“Through the Force, things you will see. Other places. The future… the past. Old friends long gone.”

“Truly wonderful the mind of a child is.”

“To be Jedi is to face the truth, and choose. Give off light, or darkness, Padawan. Be a candle or the night.”

“Named must your fear be before banish it you can.”

“In the end, cowards are those who follow the dark side.”

“In a dark place we find ourselves, and a little more knowledge lights our way.”

“You must unlearn what you have learned.”

“If you end your training now — if you choose the quick and easy path as Vader did — you will become an agent of evil.”

“Train yourself to let go…of everything you fear to lose.”

“Always pass on what you have learned.”

“Fear is the path to the dark side. Fear leads to anger. Anger leads to hate. Hate leads to suffering.”

“Smaller in number are we, but larger in mind.”