Everybody has experienced a runny nose at some point. A chronic runny nose can have many different causes and characteristics. For example, the color of the nasal discharge can vary as well.

In some cases, one may experience a runny nose with clear fluid that is constant or persistent.

This article explores some causes of a chronic runny nose. The article also addresses what you can do to ease the symptoms and the treatment options your doctor may prescribe. 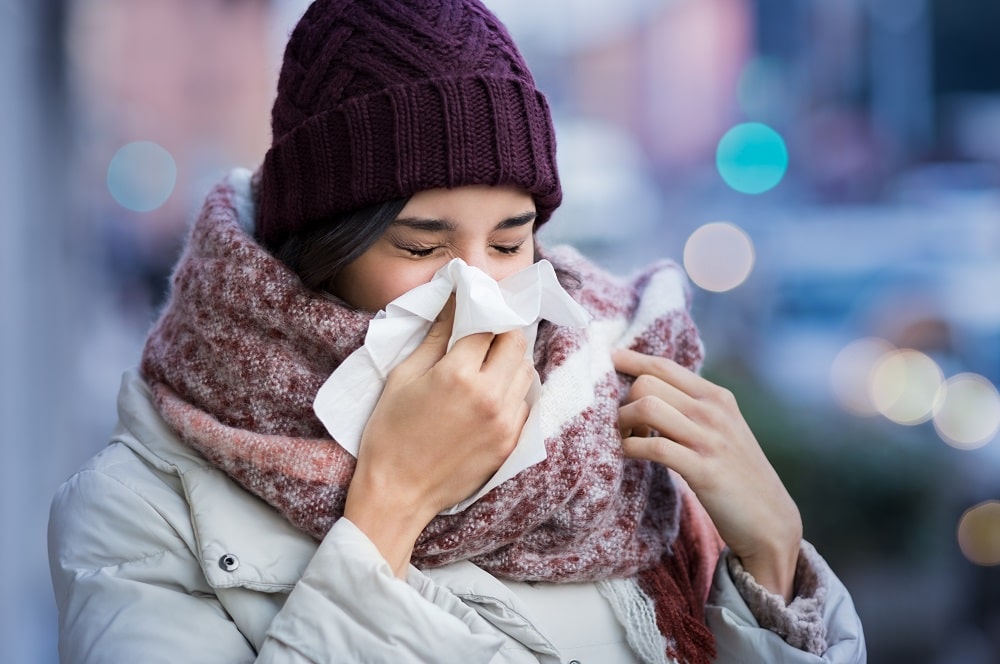 A typical runny nose is caused by an increase in the production of nasal mucus. A runny nose can have many causes but often occurs due to the inflammation of tissues inside your nose. This inflammation is also known as rhinitis.

A chronic runny nose happens repeatedly or takes a long time to go by itself. It may present itself as an extra fluid that is produced and can drain from your nose or down to the back of your throat. This is also called post-nasal drip.

So what are some of the potential causes of a chronic runny nose?

Some viral infections such as the common cold and the flu can attack the tissues of your nose. To respond to this, your nose produces more mucus to trap and wash the viral particles away. This causes a persistent runny nose.

Some allergies are a common cause of a chronic runny nose. Allergies affecting your nose are called allergic rhinitis. With allergic rhinitis, the immune system overreacts to a typically harmless substance, such as pollen, mold, or for some people, pet dander. The body reacts by having inflammation in the nasal passages and therefore increased mucus production.

Non-allergic causes of chronic runny nose describe nasal symptoms that develop in the absence of allergies or an infection. While the exact biological cause of non-allergic runny nose is unknown, various factors can trigger, including; some foods, medication like the overuse of nasal decongestants, irritants, and changes in weather.

Infections inf the sinuses and adenoids

Sinuses or facial cavities that drain into the nose can fill with infected mucus resulting in sinusitis – an inflammation of the sinuses. Adenoids, as well, which are tissues found in the back of the nose, can also get infected and cause a similar production of mucus.

There are many causes of a chronic runny nose. These are just but some of them. A typical runny nose will most likely go away on its own. So generally, it does not need treatment. But, for a chronic case, you might need to see your doctor, or access healthcare through a telehealth service.

It is time to see your doctor for treatment of a chronic runny nose if;

Intranasal steroid sprays that are applied directly into the nose are often recommended as the first line of treatment. These steroid sprays are potent anti-inflammatory and anti-allergic agents that may relieve most of the associated symptoms of a chronic runny nose, nasal congestion, and post-nasal drip.

These are drugs that are highly effective, mostly for allergic patients. Oral steroids are best used for the short-term management of chronic runny noses caused by allergies. These must be prescribed and their use monitored by a healthcare professional. Their extensive use can have serious side effects and are thus reserved only for chronic cases that fail to respond to the usual treatment.

The decongestant sprays quickly reduce the swelling of nasal tissues by shrinking the blood vessels in these tissues. This improves breathing and drainage over the short term. The use of these decongestant sprays should be limited to 3 to 5 days because of their potential to cause addiction.

Immunotherapy treatment is another treatment line used to reduce a person’s response to an allergen. It works by identifying an allergen, then small amounts of the allergen are given back to the patient. The patient will then develop antibodies that will react to the allergen, and they will become less sensitive as well as less reactive to the substance causing allergic reactions.

There are different possible causes of a chronic runny nose, with some of the most common ones including; allergies, infections, and non-allergic causes.

For most patients, a runny nose is easily managed at home and goes away within a few days. For chronic runny nose, you might need to see your doctor who will use different treatment options, including; the use of decongestants, nasal sprays, oral medications, or immunotherapy.